Seanergy Maritime Holdings Corp. (NASDAQ:SHIP) is the only pure-play Capesize ship-owner publicly listed in the US. Seanergy provides marine dry bulk transportation services through a modern fleet of 10 Capesize vessels, with an aggregate cargo-carrying capacity of approximately 1,748,581 DWT and an average fleet age of approximately ~10.3 years.

The Company is incorporated in the Marshall Islands with executive offices in Athens, Greece and an office in Hong Kong. The Company’s common shares trade on the Nasdaq Capital Market under the symbol “SHIP,” and its Class A warrants under “SHIPW,” and the Class B warrant warrants under “SHIPZ.”

An Update to my Prior Article

To begin, this article serves as an update to my previous one a week-and-a-half ago. I want to outline to those who are looking for guidance on Seanergy that the very near-term will likely present a very high-risk, high-reward opportunity to make money, however I encourage ALL investors to exercise immense caution. I will break down my reasons for each perspective and the concerns I have in-depth.

Fundamentally, Seanergy Can Thrive in the Current Environment

Capesize 5TC rates continued their rally last week reaching a yearly high of $34,583, up $4,146 week-over-week as of Friday's close. The Baltic Capesize Index also continued it's record-breaking run last week and into this week, hitting new highs not seen in nearly 9 years, closing at $4,862 (+4.4% d-o-d,) this Tuesday afternoon. The Baltic Dry Index also closed at $2,501 on Tuesday, marking another multi-year high not seen since November 2010.

Not only have the shipping rates gone up with many vessels out-of-service in order to prepare for IMO 2020 regulations, but so has China's demand for iron ore it appears. They are also expected to implement more economic stimulus, which is another factor that will drive higher demand for iron ore through infrastructure expansion. Thus further increasing the demand for Capesize ships, which is likely to further increase shipping rates given the aforementioned factors.

As seen in August 29th's Form 13-G/A, Eric Krafft has increased their holdings from 1,971,359 shares to 2,734,000 shares. This would appear to be a bullish sign from their major investors, and serves as such sentiment for the company.

The Causes for Concern with the Recent 6-K Filings

Seanergy will hold their Annual Shareholder Meeting to vote on several things, one of them being a reverse-split. Of the two other planned votes, the first is to approve two Class A directors to serve until 2022's Annual Shareholders Meeting, and the second to approve the appointment of Ernst & Young (Hellas) Certified Auditors-Accountants S.A. whom will serve as independent auditors for the Seanergy's 2019 fiscal year financials.

The initiatives to allocate two new Class A directors and also an independent FY19 auditing company for Seanergy will come at a cost, and likely a small yet significant one comparatively to their current market cap. Average Class A Director salary pay is six-figures, and that will likely be paid in a combination of cash and equity, plus bonuses. The auditors should be paid out in cash from their cash-on-hand. That said, these two factors are things to now budget for when projecting Q3, Q4, H2, and overall 2019 FY reports. 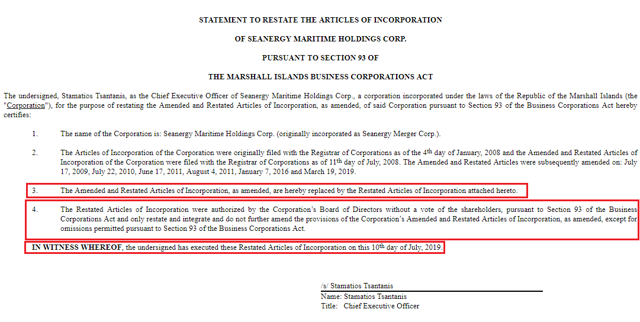 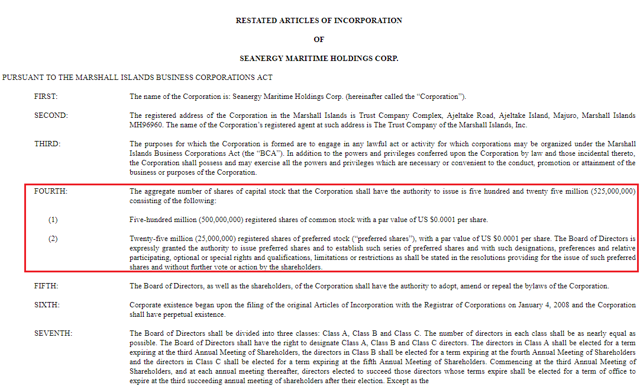 I believe the restated articles of incorporation as seen above is most crucial concern for long-term investors of Seanergy. The restated articles of incorporation allows for the company to issue up-to 500,000,000 shares of common stock, and up-to 25,000,000 shares of preferred stock, which is shown and in exhibit 3.1 as a registration of securities form F-3 per the SEC filing.

Outlook Summary of Seanergy and "The Perfect Storm"

The company has strong fundamental support for the price point of the current shares, however there is some concern regarding increases in capital spending for the auditors and directors which will most likely be approved in the annual shareholder meeting. While the amount of money spent hiring directors is not significant compared to the expected increase in revenue for Q3 and Q4 given shipping rates hitting multi-year highs, it is expected that the rates fall as recession hits as well the supply of shipping vessels to increase after IMO 2020 regulations go into effect with more ships back in-service.

The reverse-split is a minor concern, as it doesn't adjust the intrinsic value of the company on its own. However, the restated articles of incorporation show the company is and has-been registered for up to 525,000,000 shares of stock to be issued, which must be taken into consideration should the high cost of shipping rates not hold more than the next few quarters. I want to emphasize that the restated articles of incorporation is a normal house-keeping matter, but still one to consider. Whether or not further dilution will occur remains to be seen at this time, but given the shipping rates have historically dropped after a recession is in full swing, it does leave that possibility open if debts are not substantially paid down while the earnings are good, as well as more overhead cost for maintaining two additional directors until 2022 if the vote is approved at the annual shareholder meeting.

If the future repeats the past regarding values seen of Seanergy's historical market capitalization, this could lead to a sell the news scenario for shareholders as we near recession.

I find the current target sell area to be between 70-80¢ between now and Q3 ER, and see more downside risk to hold shares above that price without news as a catalyst to support the price movement. Should it become a momentum-runner and break above 80¢ in this interim, I plan to sell into such a rise and look for dips to buy-back.

In closing, this bears repeating, this is a very risky trade and investors should exercise immense caution when it comes to long-term investing.

Correction and Clarification to the Article: The articles of incorporation were restated in the 6-K filing published last Friday, August 30th, and not amended as initially stated in my original publication of this article. The amount of registered shares is and has-been 500,000,000 common stock shares and 25,000,000 preferred stock shares for the last 8 years. I have corrected the information contained within the article and adjusted my viewpoints accordingly. My apologies for any confusion this has caused.

Ryan Reed
35 Followers
I am an entrepreneur who utilizes day trading as a source for venture capital growth to tap into for my business endeavors, as well as an IT consultant with over 10 years experience in the field.
Follow

Disclosure: I/we have no positions in any stocks mentioned, but may initiate a long position in SHIP over the next 72 hours. I wrote this article myself, and it expresses my own opinions. I am not receiving compensation for it (other than from Seeking Alpha). I have no business relationship with any company whose stock is mentioned in this article.

Additional disclosure: My price target is 70-80¢ before Q3 ER, and see a momentum-run above 80¢ as a very opportune moment to sell into what should be good liquidity.