There's been a high-stakes economic game of trade going on between the United States and China, but it's unclear what actual game is being played or what the rules are? Is it Chinese checkers, chess, or some other game?

Currently, the rules of the U.S.-China trade war game are continually changing. Most recently, the U.S. has implemented 15% in added tariffs (on approximately $125 billion in Chinese consumer imports) on September 1st. The president and his administration appreciate the significance of trade negotiations, especially as it relates to his second-term reelection campaign, which is beginning to swing into full gear. However, game enthusiasts also understand you can't win or truly play a game if you don't know the rules. In that same vein, investors have been confused about the U.S.-China trade game as the president's Twitter account has been blowing up with tariff threats and trade discussion updates. As a negotiating tactic, the current unpredictable trade talks spearheaded by the Trump administration have been keeping investors guessing whether there will be a successful deal payoff. Until then, market participants have been sitting on the sidelines watching the stock market volatility unfold, one tweet at a time.

Here's what the president has planned for other tariffs:

This uncertain game translated into all the major stock market averages vacillating to an eventual decline last month, with a price chart resembling a cardiogram. More specifically, after bouncing around wildly, the S&P 500 decreased -1.8% last month (see chart below), the Dow Jones Industrial Average dropped -1.7%, and the tech-heavy Nasdaq fell -2.6%. 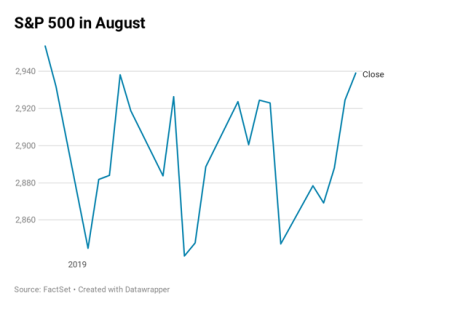 Politically, there is bipartisan support to establish new trade rules, and there is acknowledgement that China has been cheating and breaking trade rules for decades. The consensus among most constituencies is especially clear as it relates to Chinese theft of our intellectual property, forced technology transfer, and barriers for U.S. companies to invest in China.

Beyond trade talks, China has been stirring the geopolitical pot through its involvement in the political instability occurring in Hong Kong, which is a Special Administrative Region (SAR) of China. For over five months, Hong Kong has had to deal with mass demonstration and clashes with police, primarily over a proposed extradition bill that Hong Kong people fear would give mainland China control and jurisdiction over the region. Time will tell whether the protests will allow Hong Kong to remain relatively independent or the Chinese Communist party will eventually lose patience and use an authoritarian response to the protesters.

What's different this time? Unlike the past, is it possible the next recession can be averted or delayed? One major difference is the explosion in negative interest rate-yielding bonds now reaching $17 trillion. 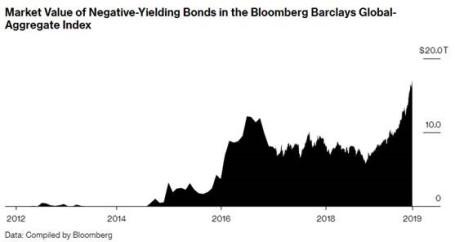 Yes, you read that correctly, investors are lining up in droves for guaranteed losses - if these bonds are held until maturity. This widespread perception as a move to perceived safety has not protected the U.S. from the global rate anchor sinking our long-term interest rates. United States interest rates have not turned negative (yet?), but rates have fallen by more than half over the last 10 months, from +3.24% to +1.51% on the 10-Year Treasury Note. Will this stimulate businesses to borrow and consumers to buy homes (i.e., through lower cost mortgages) or are these negative rates a sign of a massive global slowdown? The debate continues, but in the meantime, I'm going to take advantage of a 0% interest rate loan to buy me an 85″ big screen television for my new home!

This article is an excerpt from a previously released Sidoxia Capital Management complimentary newsletter (September 3, 2019).

Disclosure: Sidoxia Capital Management (SCM) and some of its clients hold positions and certain exchange traded funds (ETFs), but at the time of publishing had no direct position in any other security referenced in this article. No information accessed through the Investing Caffeine (IC) website constitutes investment, financial, legal, tax or other advice nor is to be relied on in making an investment or other decision. Please read disclosure language on IC Contact page.

Wade Slome, CFA
1.25K Followers
Wade W. Slome, CFA, CFP® is President and Founder of Sidoxia Capital Management, LLC and published author of How I Managed $20,000,000,000.00 by Age 32. In addition, Mr. Slome has been a media go-to resource as seen on CNBC and ABC News. He has also been quoted in the Wall Street Journal, USA Today, New York Times, Dow Jones, Investor's Business Daily, Bloomberg, Smart Money, among other media publications. Online, he is lead editor of the investment blog, InvestingCaffeine.com and a contributing writer to Morningstar, and Wall St. Cheat Sheet. Bloomberg identified him as the second youngest manager among the largest 25 actively-managed U.S. mutual funds in 2005. Besides his work at Sidoxia, Mr. Slome is an instructor at the University of California, Irvine extension department, where he teaches the Advanced Stock Investment course. Wade Slome holds an MBA from Cornell University with an emphasis in Finance. He earned a B.A. in Economics from UCLA. In addition, he holds the credentials of CFA (Chartered Financial Analyst) and CFP® (Certified Financial Planner). Mr. Slome managed one of the ten largest growth funds in the country ($20 billion in assets under management) at American Century Investments, and currently manages a hedge fund in addition to separate customized accounts for a selective client base at his firm (Sidoxia Capital Management, LLC) in Newport Beach, California.
Follow
4 Comments