The following chart shows the monthly increases and decreases for dividends reported by Standard & Poor's for each month from January 2004 through August 2019. 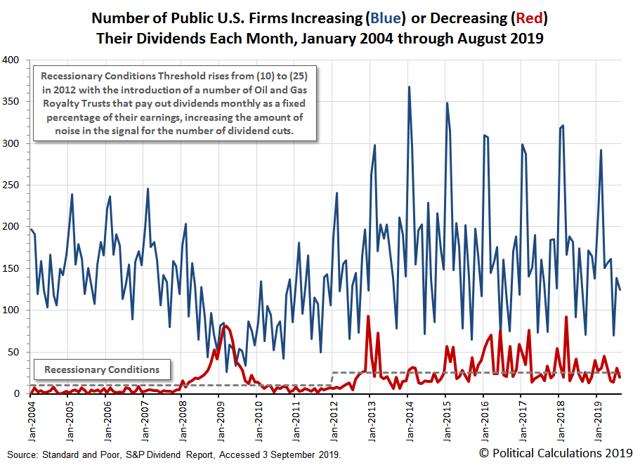 We've previously presented our ongoing sampling of real-time dividend cut announcements for 2019-Q3 with data through August 26, 2019. There were no additions to that list during the remainder of the month.

Meanwhile, if you'd ever like to review our sources, here they are!

Ironman at Political Calculations
2.23K Followers
Ironman is the alias of the blogger at Political Calculations, a site that develops, applies and presents both established and cutting edge theory to the topics of investing, business and economics. We should acknowledge that Ironman is either formerly or currently, and quite possibly, simultaneously employed as some kind of engineer, researcher, analyst, rocket scientist, editor and perhaps as a teacher of some kind or another. The scary thing is that's not even close to being a full list of Ironman's professions and we should potentially acknowledge that Ironman may or may not be one person. We'll leave it to our readers to sort out which Ironman might behind any of the posts that do appear here or comments that appear elsewhere on the web!
Follow
To ensure this doesn’t happen in the future, please enable Javascript and cookies in your browser.
Is this happening to you frequently? Please report it on our feedback forum.
If you have an ad-blocker enabled you may be blocked from proceeding. Please disable your ad-blocker and refresh.