Nvidia's (NASDAQ:NVDA) stock is breaking out, and the rally may only be starting. The stock rose above a critical technical downtrend on September 5 when the equity increased over $171. Now, the stock is likely to rise by another 11% to around $198 the highs last seen in April. The shares big break out on September 5 following the news that the US and China would schedule a trade dialogue for some time in October.

The last time I wrote on Nvidia was on August 12. At the time, I noted that the stock was likely to rise following results to $171 from its then price of $153. Since February, I have written on Nvidia 6 times, with the stock achieving my objective four of those times. You can now track all of my articles on Nvidia and Seeking Alpha on this Google Spreadsheet.

The stock is jumping over a downtrend today at $171 and is now rising above resistance at $178. It sets up a potential move higher for the stock to around $198 and back to its April highs. Additionally, the relative strength index has been steadily rising, a sign that bullish momentum is entering the stock.

Additionally, the stock has seen some bullish betting at the October 18, $185 calls. The open interest has risen to around 3,500 contracts over the past few days. The options trade for about $5.40 per contact, and given that, the open interest has a dollar value of approximately $1.9 million. That is a large wager considering the stock needs to rise to around $190.40 for the trading to breakeven on the calls. That is a gain of about 7% of the current stock price of $178. 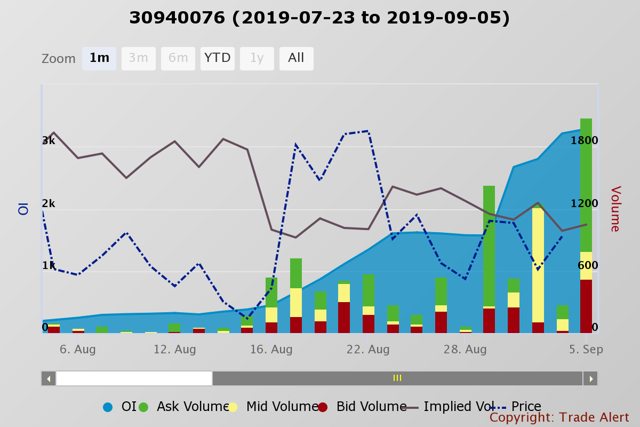 Not All Is Rosy

Despite all the optimism in the stock from a technical and options market standpoint. The company still appears to be facing plenty of challenges. According to an article in the Techradar, there are reports that AMD pasted Nvidia in GPU shipments in the second quarter. The article also notes that Intel controls the market with a 66.9% share, while AMD is passing Nvidia for second at 17.2%, as Nvidia falls to third at 16%.

Shares of Nvidia aren't cheap, trading at almost 25 times fiscal 2021 earnings estimates of $7.10 per share. That puts its valuation on the upper end of the peers. Based on data from YChart, the average PE ratio of the top 25 holdings of the semiconductor SMH ETF is 19.3, with a median of 18.3.

Still, it seems that investors and traders are looking past all of Nvidia competitive problems. Instead, they seem to be focused on the potential for a US-China trade war resolution and are betting that Nvidia's stock will be one of the big winners. That means the momentum may continue to carry the stock higher.

The focus of Reading the Markets is to find stocks that may rise or fall using fundamental, technical, and options market analysis. Additionally, we search for clues from the broader markets to discover trends and gauge direction.

I use videos, audio, and written commentaries to get the story out. Also, I now use audio to provide mid-day market updates, and explainers on Articles. Additionally, I have started to create educational videos to help people catch on to my approach.

Hope to see you soon

Mott Capital Management writes short-to-medium-term focused articles on where stocks may go. We do not write articles on investing for the long-term. In a typical article, we will tell readers where Mike thinks a stock may go over a short period of time. This allows readers to understand why a stock may be rising or falling based on an analysis of fundamental, technical, and options trading activity.

We do not trade stocks for compliance purposes and to provide our readers with an unbiased opinion. Mike is a long-term growth investor and discloses if he holds a position in his long-only portfolio.

Additional disclosure: Mott Capital Management, LLC is a registered investment adviser. Information presented is for educational purposes only and does not intend to make an offer or solicitation for the sale or purchase of any specific securities, investments, or investment strategies. Investments involve risk and unless otherwise stated, are not guaranteed. Be sure to first consult with a qualified financial adviser and/or tax professional before implementing any strategy discussed herein. Upon request, the advisor will provide a list of all recommendations made during the past twelve months. Past performance is not indicative of future results