Long-term bonds have done remarkably well this year due to falling yields. For example, both iShares 7-10 Year Treasury Bond ETF (IEF) and iShares iBoxx $ Investment Grade Corporate Bond ETF (LQD) returned over 11% (including interest) in the 12 months through August 31, and iShares Core U.S. Aggregate Bond ETF (AGG) returned 7.3%. This compares to 4% for the S&P 500 (SPY, IVV) in the same period:

US Stocks and Bonds, 1 Year 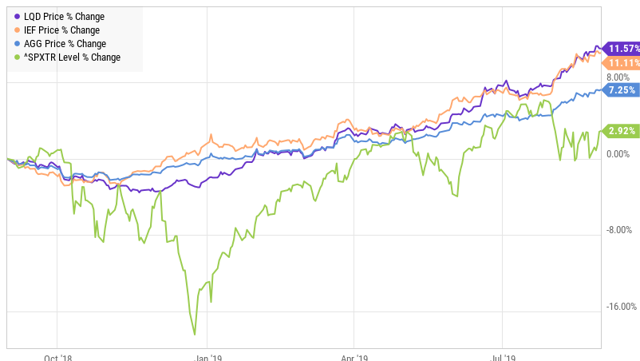 Our fixed-income models have been positive on long-term Treasuries all of this year and accordingly, we invested in longer-term Treasuries which allowed us to take advantage of this remarkable rally. While reducing risk, our Tactical US Growth portfolio derived more than half of its year-to-date return from bonds rather than stocks. Not all managers were as successful, and some got burned by betting on rising interest rates – for example, Bridgewater’s flagship Pure Alpha fund tumbled by 6% year to date.

Similar rallies also happened at the ends of the previous two economic cycles. But all rallies end, and I think this one is nearing an end too. Our Treasury model just turned negative on August 31 due to the 2‑10y yield curve inversion and due to the extremely low level of the 10-year yield. We therefore eliminated duration exposure entirely: exited our longer-term Treasury positions and reinvested in Treasury bills, which are not sensitive to interest-rate movements.

Here’s some historical perspective on this rally, since yields began falling in 1981. 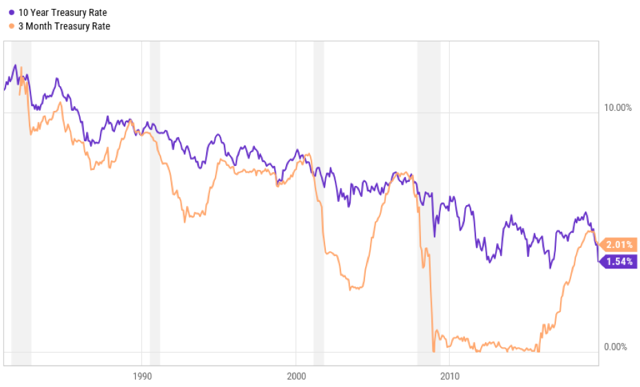 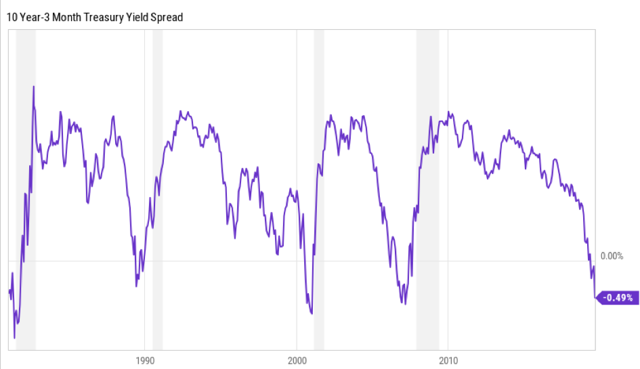 Finally, the gain in 7-10y Treasury prices represented by IEF of around 13% since November 2018 places this rally among the strongest uninterrupted rallies in modern financial history – only 1984-86 was significantly larger. The gain at the end of the previous cycle, in 2007-08, was 12%. 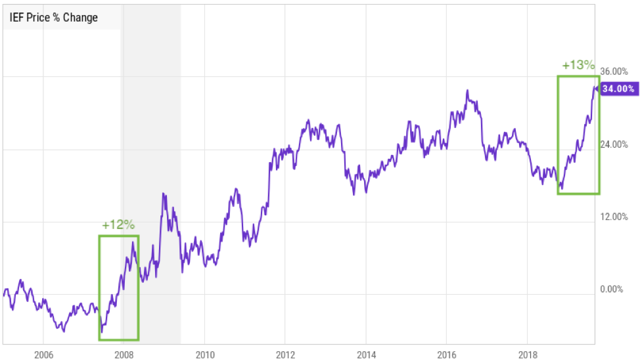 In summary, while a bond rally might be common at the end of a cycle, the extent of the current one is among the largest historically, which suggests that it’s likely nearing an end.

Could it continue against the odds? The current period is certainly unique. The amount of negative-yielding bonds in Europe and Japan just reached $17 trillion, and global investors are reaching to the US for yield (the strong dollar helps). A 25 basis-point rate cut by the Fed on September 18 is fully priced in by the market. President Trump and many market participants are calling for a larger cut. According to the CME Fedwatch, the chance of another 25-bps cut on October 30 is over 60%.

However, a number of factors could reverse the path of interest rates. Zero or negative rates have not worked well: Europe’s economies are stalling, and the ECB is out of tools. New research shows that negative rates cut lending instead of increasing it. The fact that negative rates don’t work will become abundantly clear if and when Europe falls into a recession.

Core US CPI inflation accelerated to 2.2% in July (see chart below), above the Fed’s 2% target. Meanwhile, the Fed’s preferred measure, Core PCE, remained at 1.6%. No doubt informed about inflation numbers, Chairman Powell said at the recent Fed symposium in Jackson Hole that the US economy “is in a good place,” and some regional Fed presidents expressed concerns about the Fed’s easing. Supposing that the market is right about a 25-bps cut this month, any language from the Fed suggesting no further cuts this year might trigger a jump in yields. 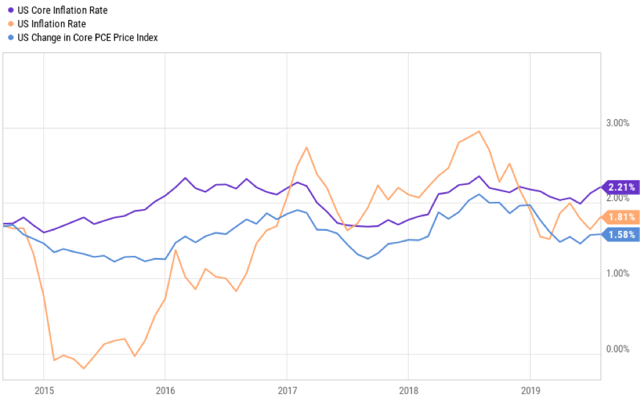 Growing budget deficits are increasing borrowing needs, and investors might refuse to lend at near-zero rates. A sign of this just appeared: a 30-year German bund auction at zero rate raised less than half of the planned EUR 2 billion two weeks ago.

Finally, China announcing that it might sell its Treasury holdings would be a big bombshell. China and Japan are the largest holders of Treasuries with around $1 trillion each. China might do this either as a weapon in the trade war with the US, or because it needs funds to shore up its currency or banks.

So, while some pundits say that US yields are heading to zero, I don’t think so. Any of the above happening – realization that negative rates don’t work, rising US inflation, failed government debt auctions, or China announcing Treasury sales – will likely propel rates higher. The chance of any of these happening seems to me to be quite high.

Roman Chuyan, CFA
1.18K Followers
Model Capital manages custom portfolios for today's demanding investors. Asset allocation is the source of most of return and risk for any portfolio - but it's only a start. Investment advice and daily professional attention to clients' investments is our full-time job.Our company is owned by its two partners. Having no broker-dealer affiliations eliminates many potential conflicts of interest in our role as a fiduciary – putting client interest first. We are fee-only, don't earn any product commissions, and our fee is very competitive.
Follow

Additional disclosure: Roman Chuyan is the president and general partner of Model Capital Management LLC ("MCM"), an SEC-registered Investment Adviser. This article is for informational purposes only. There are risks involved in investing, including loss of principal. Roman Chuyan makes no explicit or implicit guarantee with respect to performance or the outcome of any investment or projections made by him or MCM. There is no guarantee that the goals of the strategies discussed in this article will be met. Information or opinions expressed may change without notice, and should not be considered recommendations to buy or sell any security.