The use of surgical robots has increased significantly, with ample opportunity for further growth. MarketsAndMarkets expects the medical robots market to reach $16.74 billion by 2023.

Shares of established companies have generally outperformed, but some developing companies are worth looking at, especially as sector growth is also driving M&A.

We review several robotics companies here and would keep TransEnterix on the radar screen. Pro forma for a pending merger, HAIR shares trade at under 1.0x 2019 revenue guidance.

Medical robotics is an emerging sector that has established a solid foundation and continues to grow. According to the Journal of Minimal Access Surgery, "the era of robots in surgery commenced in 1994 when the first AESOP (voice controlled camera holder) prototype robot was used clinically in 1993 and then marketed as the first surgical robot ever in 1994."

Since then, the use of robotic assistance has increased significantly, with ample opportunity for further growth. According to TransEnterix (NYSEMKT:TRXC), robotic surgery currently accounts for less than 10% of total surgeries with "continued expansion into additional procedures and new global markets" driving growth. Citing WinterGreen Research, TransEnterix forecasts that the market for abdominal robotic surgery will reach $15.8 billion by 2023. 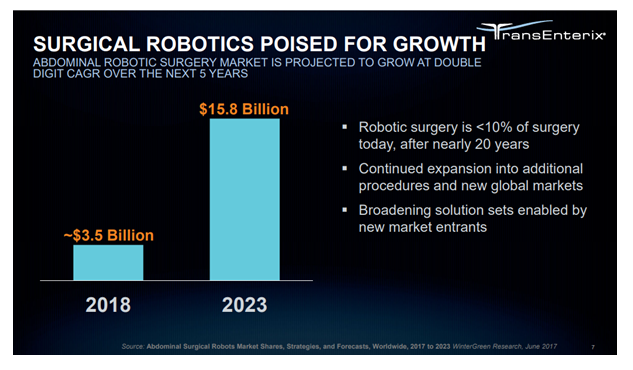 The key growth factors MNM cites are "technological advancements in medical robots, advantages offered by robot-assisted training in rehabilitation therapy, increase in funding for medical robot research, and the issuance of IPOs by medical robot companies," as well as "rapid growth in the geriatric population and rising patient preference for minimally invasive surgeries."

The use of robots facilitates surgeries that are generally less invasive than traditional procedures. Robotically-assisted surgeries can also sometimes reduce the length of hospital stay, which lowers hospital and patient costs. Reflecting these benefits, the number of surgeries using robots has increased dramatically, and the sector is expected to continue to grow.

In addition to factors cited above by MNM, anticipated sector growth is expected to be driven by regulatory approval of non-invasive surgical techniques. Although not without its own risks, surgical robots generally help produce smaller and more accurate incisions, leading in turn to reductions in complication rates and, as noted, hospital stays. These are positive factors for hospitals, patients and reimbursement agencies alike. Expanded use cases for robotic systems in surgical procedures, combined with the overall aging of the population, rise in the incidence of neurological and orthopedic disorders and expanding demand for telemedicine, are also factors contributing to expected market growth.

Within the sector, shares of larger established companies such as Intuitive Surgical (ISRG) have generally outperformed those of smaller newcomers, highlighting the risky nature of investing in early-stage and pre-revenue companies, in our view. Intuitive was an early mover, introducing its da Vinci system in 1997.

The downside of investing in an emerging company can be significant if it flounders or runs out of funds to finance ongoing development. Nevertheless, if a newcomer's robotics technology shows early signs of success, the potential returns can be substantial.

Moreover, in some cases, M&A or strategic alliances have driven better-than-average price performance for shares of emerging companies. The latest example is that Siemens Healthineers AG (OTCPK:SMMNY), a subsidiary of Germany's Siemens AG (OTCPK:SIEGY), is acquiring Corindus Vascular Robotics (NYSEMKT:CVRS) for $4.28 per share, up from $2.42 the day before the deal was announced.

Corindus notes that its "CorPath® platform is the first FDA-cleared medical device to bring robotic precision to percutaneous coronary and vascular procedures." Corindus has begun to display strong revenue growth, albeit off a small base. Revenue in 2Q19 was $4.6 million, up 175% from $1.7 million in 2Q18, according to company reports.

The Corindus deal is consistent with a trend of larger healthcare companies acquiring smaller ones within the innovative robotic technologies space. For instance, Mazor Robotics, Hansen Medical and MAKO Surgical Corporation were each acquired at premiums.

Intuitive is a meaningful way for investors who want exposure to the surgical robotic niche to participate, in our view, although its valuation reflects its leading position within the sector. Shares of Siemens Healthineers trade at a more attractive 2.8x TTM revenue, based on Yahoo Finance data. We are also optimistic about how Siemens Healthineers can leverage Corindus' and other technologies. In addition to Stryker and Siemens Healthineers, Smith & Nephew (NYSE:SNN) is another large healthcare company that has entered the robotics space through M&A.

Headquartered in North Carolina, TransEnterix describes itself as "a medical device company that is pioneering the use of robotics to improve minimally invasive surgery." It notes that it is "digitalizing the interface between the surgeon and patient in laparoscopy to increase control and reduce surgical variability for improved patient outcomes."

The company focuses on the development and commercialization of its ALF-X System, a multi-port robotic surgery system that enables up to four arms to control robotic instruments and a camera, and its SurgiBot System, a single-incision, patient-side robotic-assisted surgery system. The ALF-X System is available in Europe.

Today, the company holds 133 patents in key areas related to digital laparoscopy, up from 34 in 2016. It made its first sale in Europe in 2016 and laid the groundwork for commercial sales in the U.S. and Asia Pacific in 2017. The company received FDA clearance for the use of its Senhance System in laparoscopic colorectal and gynecologic surgery covering 23 procedures on October 13, 2017. The company received additional FDA clearance in May 2018 that expanded the use of its Senhance System to 28 indicated procedures.

In October 2018, the company also acquired MST Medical Surgical Technologies, through which it obtained MST's AutoLap™ technology, one of the only image-guided robotic scope positioning systems with FDA clearance and CE Mark. The company expects MST technology will "accelerate and drive meaningful Senhance System developments, and allow it to expand the Senhance System to add augmented, intelligent vision capability." With these measures in place, in 2018 the company generated $24.1 million in revenue, up from $7.1 million and $1.5 million in the two prior years respectively. TRXC shares are at a 10.2x multiple on TTM revenue, but 4.9x on the 2020E average revenue forecast on Yahoo Finance.

We note however that in May 2019 Piper Jaffray initiated coverage on the company with a neutral rating. Apparently, Piper Jaffray wants to see greater adoption and physician feedback on the company's robotic system in order to become more bullish on TRXC shares. We believe TransEnterix has accomplished a lot in recent quarters and would keep this name on the radar screen.

Headquartered in Toronto, Canada, Titan Medical is a development stage company that is developing its SPORT (Single Port Orifice Robotic Technology) Surgical System, comprised of a surgeon-controlled robotic platform with 3D vision and interactive instrument control for performing minimally invasive surgery. The company believes SPORT will enable surgeons to perform procedures within small to medium size surgical spaces for general abdominal, gynecologic, and urologic indications. At this point, the company is pre-revenue. Titan indicates that it is "developing next generation robotic surgical technologies."

The company has over 120 global patents and applications, with 45 U.S. and international patents issued and 82 applications pending. Titan plans to launch commercial sales in the U.S. in 2020 using a direct sales strategy. Its initial target is to use its technology for benign gynecological surgeries in the U.S., which it believes is a $900 million addressable market. The company's technology has already been used in 45 procedures including gynecology, urology, colorectal and general surgery, offering proof of concept about its feasibility. The company expects to submit an IDE (investigational device exemption) application to the FDA by year-end.

Founded in 1990, St. Louis, Missouri-based Stereotaxis designs, manufactures, and markets robotic systems and instruments for the treatment of abnormal heart rhythms. It calls itself "the global leader in innovative robotic technologies designed to enhance the treatment of arrhythmias and perform endovascular procedures."

The company notes that there are more than 100 issued patents to support the Stereotaxis platform. Its products include the Niobe ES robotic system, Odyssey portfolio of lab optimization, networking and patient information management systems, and Vdrive system, which have received regulatory clearance in the U.S., E.U., Japan, Canada and China.

The company presented at the Heart Rhythm Society conference in May 2019 and has indicated that subsequent interest in its technology has increased. However, this possible trend has, not surprisingly, not been reflected yet in the company's financial results, as 2Q19 revenue of $6.8 million was down compared to $7.6 million reported in 2Q18. The company raised $25 million in a private placement last month. Stereotaxis had cash and equivalents of $8.5 million and no debt as of June 30, 2019. Pro forma for the recent financing, cash and equivalents as of June 30, 2019, would be roughly $31.6 million. The company also uplisted its shares to the NYSE American stock exchange earlier this month.

In addition, earlier this year, Restoration Robotics entered into a definitive merger agreement with privately-held Venus Concept, which received FDA clearance to market and sell Venus Bliss™, a fat reduction and cellulite reduction solution. In a 60-patient clinical study, Venus Bliss™ "subjects … saw a statistically significant reduction…" and "greater than 90% of the subjects found the treatment to be comfortable and the majority were highly satisfied with the results," according to the company.

The proposed transaction would make Restoration Robotics a leading "medical aesthetics company," with technologies related to hair restoration and fat reduction. Moreover, Venus Concept already has a solid revenue stream. It generated revenue of $102.6 million in 2018, up 15.2% from $89.1 million generated in 2017, according to the company. Restoration Robotics has provided 2019 revenue guidance for the combined company of $130 million to $135 million. If the transaction closes, that would put HAIR shares at under 1.0x on a market cap to sales basis, pro forma for financing the merger.

If the merger is not consummated, Restoration Robotics must pay Venus a termination fee of $1.1 million. However, management expects it to close in September or early October of 2019, "subject to the satisfaction of customary closing conditions, including the approval by the stockholders of each of Restoration Robotics and Venus Concept and the receipt of all necessary regulatory approvals."

Follow Market View and get email alerts
+
Add a comment
Disagree with this article? Submit your own.
To report a factual error in this article, click here.
Your feedback matters to us!