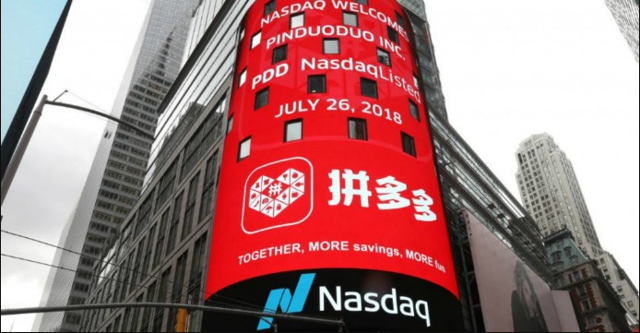 Before Pinduoduo's (NASDAQ:PDD) IPO last year, I noted that it presented a competitive challenge to Alibaba (BABA). In that article, I included this chart brought to my attention by Seeking Alpha contributor Rohit Chhatwal, which showed that Pinduoduo's number of daily active users had already surpassed those of JD.com (JD). 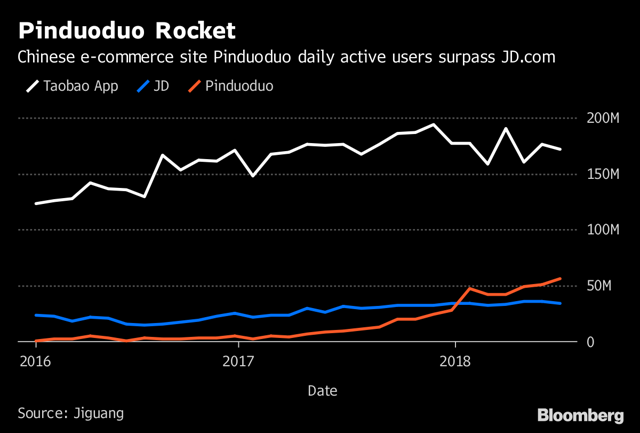 Since then, Pinduoduo has outperformed both Alibaba and JD.com.

But it has gone parabolic since July, spiking more than 80%.

Now, Seeking Alpha contributor ALT Perspective argues that Pinduoduo is at a crossroads: its shares are trading at higher valuations than those of its competitors Alibaba and JD.com, and its management has to decide whether to focus more on competing with BABA and JD in bigger cities or expanding its niche in rural parts of China. For cautious Pinduoduo bulls who want to stay long while strictly limiting their downside risk, we'll look at a couple of ways of doing so below.

As of Friday's close, these were the optimal, or least expensive, put options to hedge 1,000 shares of PDD against a greater-than-20% decline by mid-April. 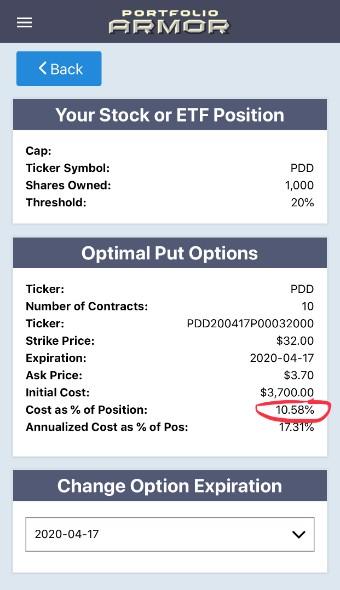 The cost here was $3,700 or 10.58% of position value, calculated conservatively, using the ask price of the put options. In practice, you can often buy and sell options at some price between the bid and ask.

If you were willing to cap your possible upside at 20% between now and mid-April, this was the optimal, or least expensive, collar to protect you against the same, greater-than-20% decline as above over the same time frame. 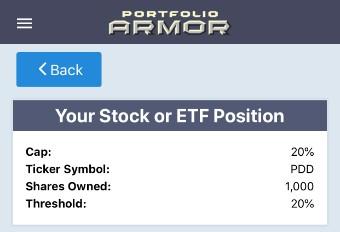 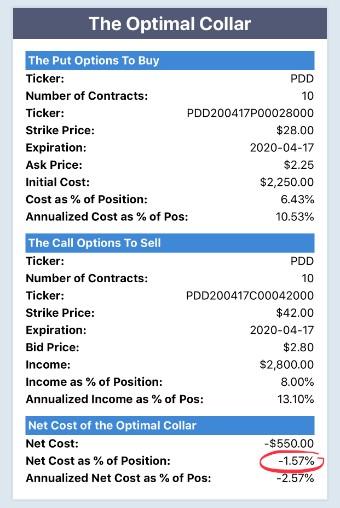 Here, the cost was negative, meaning you would have collected a net credit of $550 or 1.57% of position value when opening this hedge, assuming, conservatively, that you placed both trades (buying the put options and selling the call options) at the worst ends of their respective spreads.

Wrapping Up: Another Way To Lower Hedging Cost

I suspect that some readers may feel the first hedge above was too expensive, but that they may not be willing to cap their possible upside at 20% between now and April, as the second hedge requires. Another approach for these investors would be to use the "change option expiration feature" to scan for optimal put hedges expiring sooner. For example, as of Friday's close, it was possible to hedge against a greater-than-20% decline in Pinduoduo with optimal puts expiring in late October for a cost of about 1% of position value.

To be transparent and accountable, I post the performance of everything I present in my Marketplace service six months later. The most recent cohort to hit the six-month mark didn't do so well. You can see its performance here: Performance Update - Week 92. The cohort from Week 93 (March 7) hasn't finished yet, but the top ten names I presented then are outperforming SPY so far, as you can see in the screen capture below.

David Pinsen
18.82K Followers
I developed the hedged portfolio method of investing at Portfolio Armor, and I run a Marketplace service at Seeking Alpha based on it called Bulletproof Investing.
Follow