Tata Motors Ltd.’s (NYSE:TTM) acquisition of Jaguar Land Rover (JLR) from Ford for $2.3 billion in 2008 was a great purchase. It may not go down in the corporate history books as best billion dollar acquisition ever, but Tata Motors got a deal. As you’ll recall, Ford was a little desperate to shed assets and raise cash around that time. Since the acquisition, Tata Motors has basically run JLR as an independent wholly-owned subsidiary. JLR distributes its vehicles through an independent dealership network with 1,600 retailers globally.

The biggest risk to buying Tata Motors today, is some sort of horrific Brexit that forces Tata Motors to sell JLR in a desperate cash crunch, as Ford was forced to in 2008. It’s unclear what would happen if that all played out, but I doubt Brexit’s secret agenda is to reclaim ownership of JLR. Though JLR is junk rated, they do seem to have “too big to fail” status. The U.K. Export finance agency recently gave JLR a £500 million loan guarantee as part of a £625 million debt issuance. 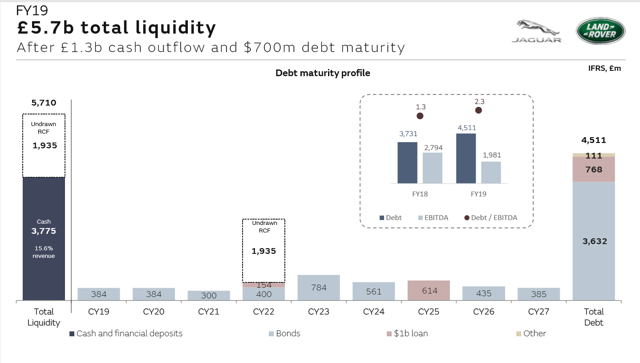 The above slide did not reflect the recent £625 million in funding. 6.3 billion pounds seems like ample liquidity for most Brexit scenarios, and represents approximately 4 months revenue. JLR also has a Slovakia manufacturing facility that could mitigate some EU production or supply chain issues that could arise post-Brexit. With assembly-line factories in Britain, Slovakia, China, and Brazil there is some flexibility to move final assembly volumes around to avoid tariffs. I would not be surprised if a US plant announcement was made post-Brexit.

There is risk that Britain and EU sales decline sharply in a bad Brexit scenario, but it’s also equally likely that pent-up demand exists as consumers have been delaying their luxury car purchases in fear of a bad exit.

Other than the confusing parent-child ownership structure where the child is ~75% of total revenues, Tata Motors has good investor reporting and disclosure practices. Monthly JLR sales by Model and Region are reported to investors. This report shows China sales have stabilized in 2019 and are starting to show YoY growth in recent months. The 2019 Land Rover Evoque refresh has been selling well in markets where it has launched, and it will be available in China this fall. North American sales remain strong with the strength of the US consumer and US dollar. Sales of the 2019 Discovery Sport are on run out, as a mid-cycle refresh model is coming out for the 2020 model year. A return to selling ~120K Discovery Sport models per year is plausible.

The Land Rover Defender is set to be unveiled at the Frankfurt Auto Show and go on sale in 2020. Jaguar’s I-Pace has received accolades and is selling well for its first EV. Waymo has up to 20,000 I-Pace’s on order. Although the I-Pace falls behind Tesla (TSLA) in efficiency and range, Jaguar has definitely figured out how to make a fast EV, maybe their participation in Formula E racing has helped. The Jaguar F-Pace crossover SUV is leading Jaguar sales, as sedan sales languish. Jaguar’s flagship XJ sedan is likely going all-electric in 2020 as its production plant is currently retooling for electric drivetrain production. Jaguar sedan (XE, XF, XJ) sales made up only 9.5% of JLR sales in the first half of 2019. At such a small percentage of sales, moving all Jaguar sedans to electric sooner rather than later might be worth the risk.

JLR management believes they will be able to improve margins over the next few years, with long term guidance below expecting a return to 7-9% EBIT margins:

This seems achievable to me as it is really a return to prior profitability levels. JLR has been executing its cost-cutting initiative dubbed “Project Charge” and the lower pound helps profitability in the long-term. For example, the lower pound allows JLR to price its entry level Discovery Sport lower in USD terms, which should bring new customers to the Land Rover brand. USD pricing on the Land Rover Discovery Sport is already very competitive at $37,800. Below are selected 2019 MSRPs of SUVs at similar trim, engine, and drivetrain levels to the Discovery Sport:

Note that of the above, only the GMC Acadia matches Discovery Sport’s ability to seat 7. Land Rover could gain US market share with its Discovery Sport, as millennial household formation picks up and they refuse to buy minivans. Below are MSRPs of other luxury SUVs that seat 7:

Source: “The Best 7-Passenger Luxury Vehicles You Can Buy in 2019” – cars.usnews.com

From the above you can see that Land Rover is well-positioned to continue to gain market share in the premium SUV market, which has arguably become global car manufacturers’ most important segment. Even Lamborghini could not resist getting in on the SUV action, launching the Lamborghini Urus this year.

Tata Motors trades mostly on JLR news as JLR has historically generated the majority of revenues and profits. In the fiscal year ended March 31, 2019, JLR generated 76.5% of consolidated revenues (Source: Tata Motors Annual Acccounts 2018-19 PDF). Tata Motors rallied significantly this spring from a closing low of $10.51 on February 8, 2019 to a closing high of $17.10 on April 18, 2019. This was mostly on the expectation that JLR’s China business was bottoming. However, India’s auto industry has experienced a significant decline in 2019, especially in recent months. This has caused Tata Motors to fall along with other Indian auto stocks trade to a new closing low of $7.61 on August 22, 2019. TTM is an American Depository Receipt with 1 ADR share representing 5 domestic Indian Rupee shares.

India is expected to pass fiscal stimulus to boost its domestic auto sales, and the decline is seen as temporary. A lot of the decline is attributed to shadow banking pulling back on auto financing. Tata Motors’ domestic sales will be fine in the long run as India has very few cars per capita today, only about 22 cars per 1,000 people. India car sales are expected to grow over time to get the nation to 0.175 cars per capita by 2040 according to the IEA. Finally, India protects their domestic auto production with high tariffs on imported cars.

Even prescribing zero value to Tata Motors’ domestic business, it is still compelling to own JLR’s equity for $5 billion. There are no signs that JLR’s design, manufacturing, and branding capabilities have been permanently impaired. JLR’s retail partners have committed to investing £8 billion by 2025 in upgrades to their dealerships, with about £3.6 billion already invested in 750 locations [Slide 48]. JLR’s £6 billion in liquidity is enough for the company to weather all but the most dire of Brexit scenarios. Anyone desiring a position in the name should exercise caution and only buy half a position before Brexit, and the other half post-Brexit.

Disclosure: I am/we are long TTM. I wrote this article myself, and it expresses my own opinions. I am not receiving compensation for it (other than from Seeking Alpha). I have no business relationship with any company whose stock is mentioned in this article.

Additional disclosure: No information provided should be considered investment advice. Please do your own due diligence.