Today, we want to share our analysis of Bellicum Pharmaceuticals (NASDAQ:BLCM) with you. Over the last year, its stock largely fluctuated, falling from ~ $7 in September 2018 to $0.78 in August 2019. Recently, the company’s stock price grew by more than 20% after Baker Bros. disclosed its stake in the company. In this article, we intend to review recent developments and pipeline updates and discuss what shareholders can expect going forward.

Bellicum Pharmaceuticals is a clinical-stage biotechnology company that concentrates on developing novel therapeutics for the treatment of hematological cancers, solid tumors, and blood diseases. The company, based in Houston, Texas, was founded in 2004 and went public in December 2014, selling 7.35M shares at $19.00 per share. Bellicum is led by Rick Fair who joined the company in 2017 from Roche’s subsidiary, Genentech. Currently, the company has a market cap of ~ $55M and trades around $1.2 per share.

On August 21, Bellicum announced a public offering of Series 1 preferred stock and warrants priced at $1.00 per share, which helped the company receive around $57.5M (before underwriting fees) to fund its ongoing trials. Investment banks involved in the stock offering included Jefferies Group LLC, Wells Fargo Securities LLC, and Ladenburg Thalmann Financial Services Inc. Moreover, the company had entered into an agreement with certain institutional investors to sell Series 2 and Series 3 preferred stocks and warrants to receive up to $70M.

On July 8, the company announced positive results from the European registration trial of Rivo-cel (rivogenlecleucel) in pediatric patients with malignant (acute lymphocytic leukemia (NYSE:ALL), acute myeloid leukemia (AML), and others) or non-malignant disorders (primary immune deficiencies, beta thalassemia, and other erythroid disorders). Rivo-cel is an allogeneic polyclonal T-cell designed to address shortcomings of stem cell transplants to treat hematologic malignancies and inherited blood disorders. The BP-004 trial outcomes indicate that adding Rivo-cel to stem cell transplants in patients who lack a matched donor delivered comparable outcomes to human leukocyte antigen-matched unrelated donor transplants. More precisely, the Rivo-cel arm met its primary endpoint with an Event Free Survival (EFS) at 180 days of 90.9%, demonstrating non-inferiority to the EFS at 180 days of 89.9% in patients who received a Matched Unrelated Donor HLA 10/10 transplant, which is the main requirement for EMA approval. As for key secondary outcome measures, Rivo-cel was able to demonstrate an Overall Survival (OS) of 94.4%, Relapse-free survival of 82.9% in malignant patients, and Disease-free survival of 95.2% in nonmalignant patients. From the safety standpoint, Rivo-cel was generally well tolerated. The majority of adverse events (AEs) has been Grade 1-2. Only 2% of patients experienced non-Graft-versus-Host Disease AEs considered to be possibly related to Rivo-cel. Management stated that these final results will be the basis for the initiation of the MAA submission anticipated in the fourth quarter of 2019.

On June 1, the company presented interim data from the Phase 1 trial for BPX-601, an autologous GoCAR-T product candidate designed to target Prostate Stem Cell Antigen (PSCA) at the 2019 American Society of Clinical Oncology Annual Meeting that was held in Chicago, IL. As seen below, the results showed evidence of anti-tumor activity in heavily pre-treated pancreatic cancer patients. 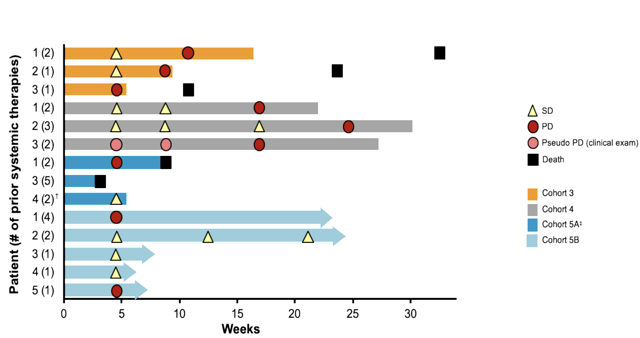 More precisely, out of the 13 patients treated with BPX-601 and a single-dose of rimiducid, eight had diseases which became stable, including three patients with tumor shrinkage of 10% to 24%. However, we would want to see at least the Phase 2 data before drawing any conclusions associated with this asset.

As is typical for a clinical-stage biotechnology company, Bellicium is currently bringing in only limited revenues (grant, collaboration, license revenues) while spending significant amounts on R&D and G&A:

As of June 30, R&D expenses registered at $19.8M compared to $18.4M for the same period a year ago. The 7.6% year-over-year R&D increase is related to the development of GoCAR-T and Rivo-cel programs. That aside, the general and administrative (G&A) expenses came in 41% higher at $7.5M. The increase was related to increases in personnel costs and commercialization activities.

As of June 30, 2019, Bellicum Pharmaceuticals had cash and cash equivalents of $56.6M and total debt of $43.7M. Additionally, the company raised $69.6M (Slide 28) through a public offering in August, bringing its total net cash to $82.5M. Cash used to run the company's operations during the first half of 2019 was roughly $46M. Based on that, we would expect the cash on hand to be sufficient for at least 12 months.

Moreover, it's highly likely that the company will need to go back to the capital markets for funding. Given the current market cap of ~$55M and a cash burn of ~$23M per quarter, we expect the company will need to execute a 41% dilutive stock offering to maintain its operations for one more quarter after cash is projected to burn out somewhere in Q2 2020. However, another option would be a licensing agreement with other biotechs, which would allow for the company to trade its marketing rights for milestone payments, avoiding dilution for shareholders.

In the following table, we have summarized the data with regard to the patient population, pricing, and revenue expectations per year:

To calculate our risk-adjusted expected revenue, we assume the following:

Under these assumptions, we estimate Risk-Adjusted “peak” revenue to stand at ~$46M. Assuming a 5 price-to-sales multiple (industry’s average) implies that the market cap potential, Bellicium, might stand at around $230M, or 5 times the current valuation, once Rivo-cel has been approved.

Institutional ownership is approximately 53.13% of diluted shares. Most of this is Armistice Capital LLC, which owns around 3.2M shares or 6.99%. Next are Baker Bros. Advisors LP, Nikko Asset Management Americas, and JPMorgan Investment Management at about 5.79%, 4.55%, and 4.36%, respectively. The rest of the owners hold relatively small stakes. According to CNN Business, approximately 6.3M shares were bought by institutions, and only 3.5M shares were sold during the second quarter of 2019.

Looking at the daily chart, we can see what's going on with BLCM. Currently, the stock is floating ~ 20% below the 50-day SMA and has been flattening in the $1.00-1.40 range since August. It's also trading 20% off the 52-week high reached in September. We believe the stock can easily bounce back 20% from current levels and, with the absence of any positive news could approach the $1.40 resistance level. 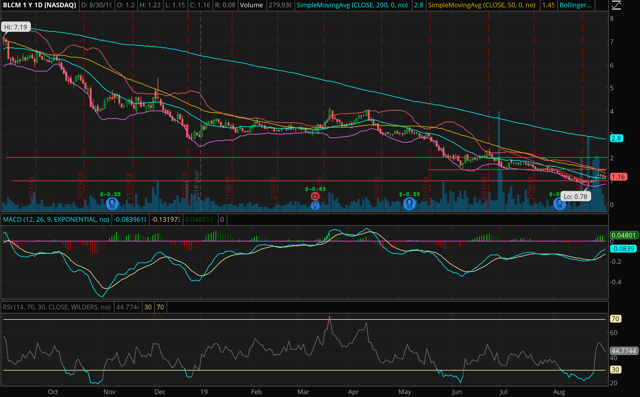 Investing in clinical-stage biotechnology firms is associated with many risks, including a significant amount of cash required for R&D in the absence of revenues, risks around drug development, and competition from other firms in the biotechnology industry. We think the main risk for Bellicum Pharmaceuticals arises from the prospects of Rivo-cel: The value of the company as a whole highly depends on the success of its drug. Even if Rivo-cel will be approved, the drug might not generate substantial revenues due to market competition and other unexpected variables. If its lead drug fails to realize its growth prospects, BLCM’s stock might fall significantly. Additionally, the company operates in a very competitive space and several companies like Kiadis Pharma Netherlands B.V., Gamida Cell Ltd., Bluebird bio, Inc (BLUE), Celgene Corporation (CELG), Celyad S.A. (CYAD), and Gilead Sciences, Inc (GILD) are developing competing therapies.

In addition, there are inherent multiple risks as biotech stocks move out of favor in the market. In our case, BLCM has tracked the SPRD Biotech ETF (XBI) moderately over the last year at a correlation coefficient of 0.39. Finally, the company is well-funded for now. However, it would likely be dependent on a funding raise to maintain its operations, which may cause a further dilution of shareholders' equity.

We believe BLCM at these levels of $1.2 per share is a “Buy.” According to TipRanks, BLCM is a “moderate buy” with an average price target of $4.00, representing a 244% upside. However, investors should be careful when entering into the stock at current levels and use limit orders to avoid negative surprises in a stock like Bellicium with a large bid-ask spread.

Author’s note: Thank you for reading. If you liked this article and would like to receive our future articles covering the biotech field, please click the orange “Follow” button. Good Luck!

PylBio Investment
315 Followers
PylBio Investment is an investment research team focused on biotech companies that represents a lot of "shots" on goal. We focus our trade strategy around "special situations" (such as catalysts, potential acquisitions or spin-offs) and how to make money from those catalysts, as direct stock purchases, combined with option-based approaches for risk minimization or through our option-based strategies.