It's been about one quarter since Medallia's (NYSE:MDLA) IPO, and like most IPOs this year, the stock's general trajectory has been downward. The customer-experience (NYSE:CX) software company was a smashing hit on its IPO day, rising 76% from an IPO price of $21. Since then, however, Medallia's gains have flagged, and ever since the company reported Q2 results, the stock has hit new post-IPO lows.

However, we find some compelling counterbalances to Medallia's slowing growth rates. The first is that alongside slowing revenue growth, Medallia is also making tremendous gains in profitability. Over the past several quarters, Medallia's pro forma operating margins have hovered near or above the breakeven point - which is incredibly rare among recent SaaS IPOs. Growth, after all, hinges on a profitability lever that companies can choose to turn - by cutting down on sales and marketing expenses, Medallia may have sacrificed a few points of growth, but it has also massively improved its bottom line.

The second is that Medallia still has plenty of head room for future growth, and even if the company doesn't sprint (at the ~40-50% y/y growth rates that some SaaS companies are hitting) toward filling its available market, Medallia's market opportunity is large enough to support sustained growth.

As seen in the chart above, Medallia estimates its TAM at $68 billion, indicating that at its current revenue scale, the company has only penetrated into ~1% of its total market opportunity. It's also important to note that Medallia has cited a long-term growth target of 25-30% y/y in its subscription revenues, which is roughly in-line with this quarter's growth rate - indicating that management is favoring more of a steady, consistent growth pace rather than the all-out sprint that many peers are chasing.

Additionally, Medallia's lower valuation presents yet another catalyst for investment. At present share prices near $31, Medallia is trading at a market cap of $3.86 billion. After netting off the company's $417.4 million of cash, Medallia has an enterprise value of $3.44 billion.

Over the trailing twelve months, Medallia has generated $356.8 million of revenue. If we assume a 20% y/y growth rate over the next twelve months (note that Medallia is projecting a 23-24% y/y growth rate for FY20 as a whole), we arrive at a forward revue estimate of $428.2 million. This gives Medallia a current valuation of 8.0x EV/forward estimated revenues.

Recall that Medallia's most prominent rival, Qualtrics (XM), was scooped up by SAP (SAP) at a 16.5x forward revenue multiple. In addition, Medallia's current revenue multiple puts its valuation below that of many other SaaS peers in the ~20-30% y/y growth range:

In my view, Medallia is worth at least 10x forward revenues, in line with peers - implying a price target of $38, or 23% upside from current levels. Stay long here and buy the dip. 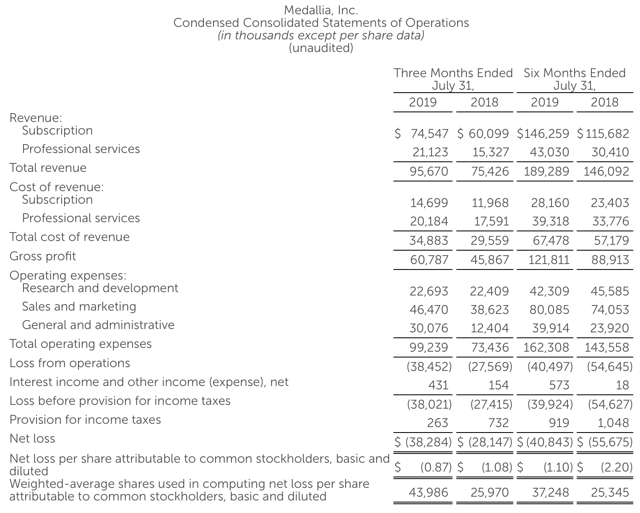 What perhaps concerned investors more than this quarter's deceleration, however, is the fact that the company more or less guided to continued deceleration. For Q3, Medallia's revenue range of $95-$97 million represents a growth range of just 17-20% y/y. For the full year, Medallia guided to $385-$388 million in revenues, or +23-24% y/y. This implies that revenues for the second half of the year will be $195.7-$198.7 million, or just 17-19% y/y growth.

Still, we like where Medallia's other top-line metrics are heading. The company ended the quarter with 613 total customers, representing 26% y/y growth: 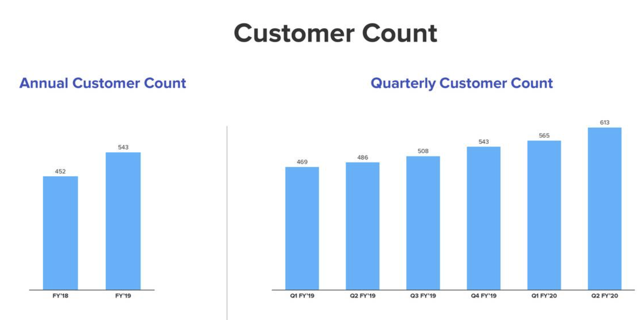 Leslie Stretch, Medallia's CEO, also commented on the Q2 earnings call that the company has recently expanded its go-to-market strategy to target mid-market enterprises, as well as pushing harder on reseller partners to drive sales:

We created a mid-market product and sales capability under Rory Cameron's leadership to exploit the opportunities presented there. We have done this because we see significant demand for our capabilities in organizations of all sizes. Thirdly, we are developing deeper relationships in our partner ecosystem. These partners helped Medallia extend our geographic and vertical coverage, accelerate the usage and adoption of our platform, augment our platform with complementary technology, promote thought leadership and provide additional implementation resources."

It's also important to recognize that part of the reason that Medallia is expecting lower growth in the future is because it's pushing on its reseller channel. Roxanne Oulman, Medallia's CFO, commented as follows:

We are focused on enhancing our partner channel as part of our growth initiatives. This includes transitioning more services and assisting our partners in expanding their consulting practices. This may impact our professional services revenue and margins in the future."

Also offsetting Medallia's lower growth rates, as mentioned earlier, is a huge bump in profitability. The company's margins have been on a tremendous upswing since 4Q19, and in Q2, Medallia achieved more than twenty-five points of margin improvement, hitting pro forma operating margins of -2.5% in the quarter.

The primary driver of this improvement is greater efficiency on the sales and marketing front, where total sales expenses fell to 40% of revenues on a pro forma basis (netting out stock-based comp), down nine points from 49% in 2Q19. This is in spite of the fact that Medallia's annual customer conference happens in Q2, and the company spared no expense this year.

Medallia's pro forma EPS of -$0.06 also squarely beat Wall Street's expectations of -$0.15, while the company's operating cash flows improved to -$20.6 million this quarter, up from a loss of -$34.6 million in the year-ago quarter: 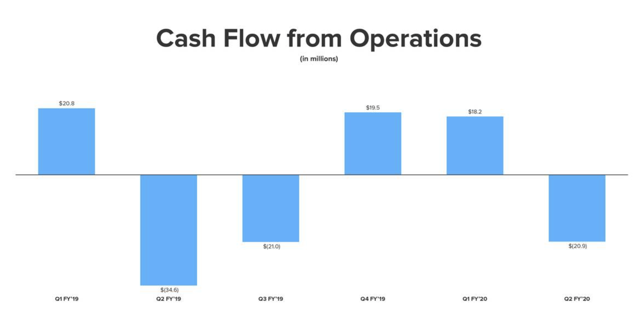 There's a lot to like about Medallia, especially after the stock has shed ~25% off recent highs. In my view, the company's slowing growth rates are counterbalanced by the fact that Medallia is vastly improving its margin profile, as well as the possibility that it's giving up lower-margin professional services revenues to third-party resellers.

Gary Alexander
23.92K Followers
Author of Daily Tech Download
Curated research on high-performing tech; winning trades closed monthly
With combined experience of covering technology companies on Wall Street and working in Silicon Valley, and serving as an outside adviser to several seed-round startups, Gary Alexander has exposure to many of the themes shaping the industry today. He has been a regular contributor on Seeking Alpha since 2017. He has been quoted in many web publications and his articles are syndicated to company pages in popular trading apps like Robinhood.
Follow

Disclosure: I/we have no positions in any stocks mentioned, but may initiate a long position in MDLA over the next 72 hours. I wrote this article myself, and it expresses my own opinions. I am not receiving compensation for it (other than from Seeking Alpha). I have no business relationship with any company whose stock is mentioned in this article.