The Michaels Companies (NASDAQ:MIK) trades at 5.75x EBITDA with more considerable EBITDA margin than that of its competitors. It is undervalued. However, market participants should understand very well that the risk is significant. The Michaels Companies commenced to close stores in 2017, has tons of debt, and its sales are declining. With this in mind, in our view, the turnaround is quite unlikely. Market participants should understand the risks before touching the shares. 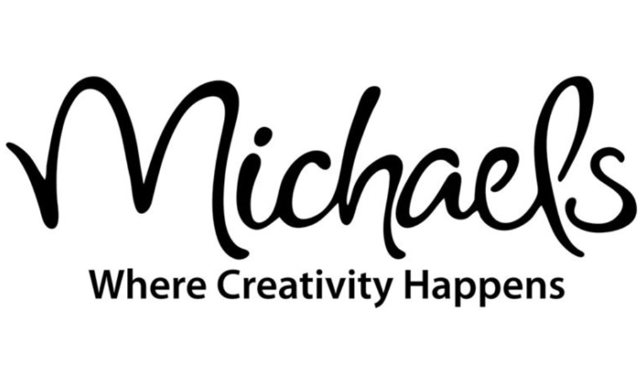 Michaels was founded in 1983. It is currently headquartered in Irving, Texas. The company is said to be the largest arts and crafts specialty retailer in Canada and the United States.

Some of the product categories offered by The Michaels Companies are shown in the image below: 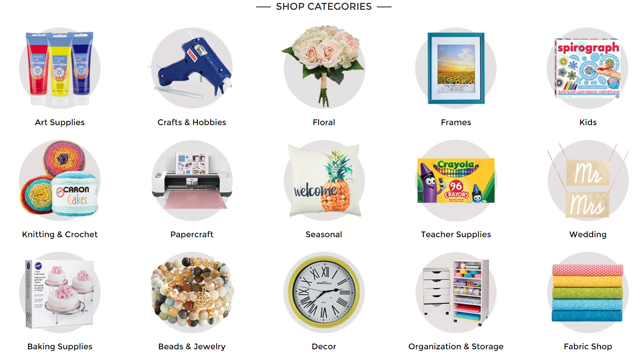 The company’s number of retail stores is quite impressive. As of February 3, 2018, the company was operating 1,238 Michaels retail stores with ~$18,000 average square feet of selling space per store. 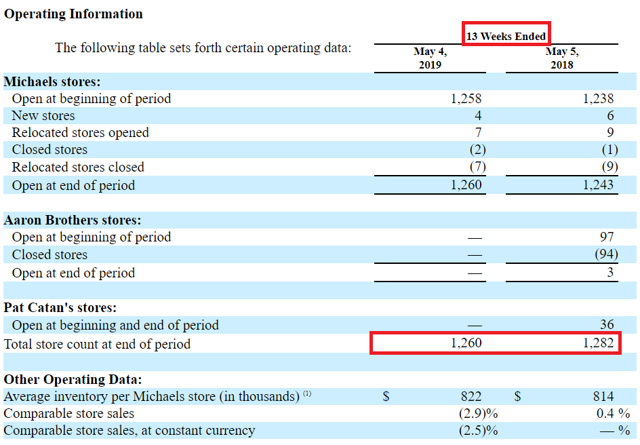 Notice that in 2018, the store count declined by 8% out of 1,371 stores. As shown in the table below, the company opened new Michaels Stores, but closed Aaron Brothers stores and Pat Catan’s stores: 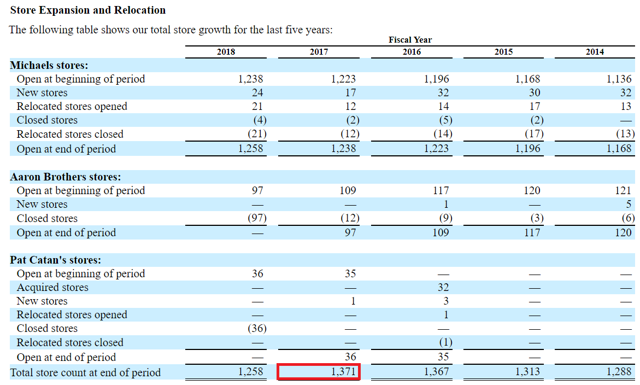 The decline in sales in 13 weeks ended May 4, 2019, is close to -6% in the United States and Canada. The reduction in the store count was equal to -1.71%. Thus, The Michaels Companies is selling less and less due to the closure of stores. The image below offers further information on the matter:

The company reported CFO of $33.8 million and FCF of $8.6 million in Q1 2019. The numbers reported were a bit better as the company received additional collections of receivables. The calculation of the FCF is shown in the image below: 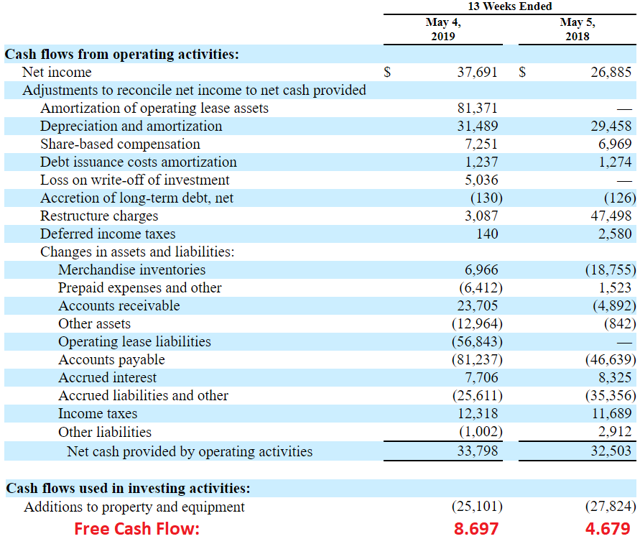 The total amount of assets increased since the company reported operating lease assets of $1.61 billion. However, investors should understand that the company has not acquired new fixed assets. As shown in the lines below, since 2018, companies can report leases as assets:

In July 2018, the FASB issued ASU 2018-11, “Leases (Topic 842): Targeted Improvements” which provided an additional transition option that allows companies to continue applying the guidance under the current lease standard in the comparative periods presented in the consolidated financial statements. We utilized the additional transition option to adopt ASU 2016-02 in the first quarter of fiscal 2019. As a result, the standard was applied starting February 3, 2019 and prior periods were not restated. We also elected the practical expedient permitted under the transition guidance which permits companies not to reassess prior conclusions on lease identification, historical lease classification and initial direct costs. The adoption of the standard resulted in the recognition of operating lease assets and liabilities of approximately $1.7 billion as of February 3, 2019. The adoption did not result in a material impact on our consolidated statements of comprehensive income. Source: 10-Q

We lease substantially all of the sites for our stores, with the majority of our stores having initial lease terms of approximately 10 years. The leases are generally renewable, with increases in lease rental rates. Source: 10-k

The table below offers further information on the company’s property and equipment:

A quick look at the table of contractual obligations reveals that the company may not have a large amount of money in 2019. However, in 2020, 2021 and 2022, it may have to pay a total of $1.49 billion. Besides, from 2023, The Michaels may have to pay a total of $2.75 billion. With the current amount of FCF and cash in hand, The Michaels Companies may need to refinance its debt or sell additional equity. As a result, the share price may decline. See the image below for more details on the matter:

Valuation - It Is Cheap

With 158 million shares outstanding and the share price at $6.27, the market capitalization of The Michaels Companies equals $990 million. Deducting $246 million in cash and adding debt of $2.71 billion, the enterprise value is close to $3.45 billion. Note that we are not adding the operating lease commitments of $2.129 billion.

Some of the competitors of The Michaels Companies are listed below:

Among these companies, PRTY appears to be of a size similar to that of MIK. As shown in the images below, PRTY trades at 7.2x with an EBITDA margin of 13% and Debt/EBITDA of 6x: 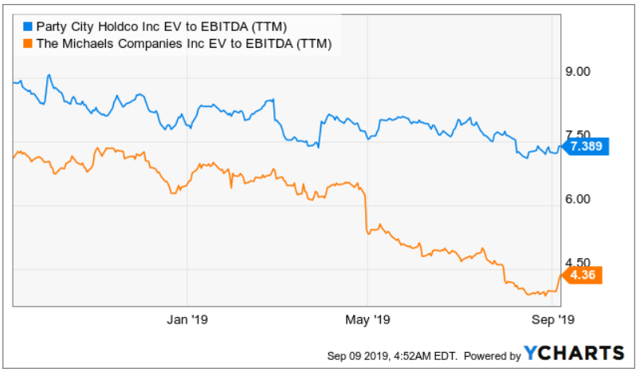 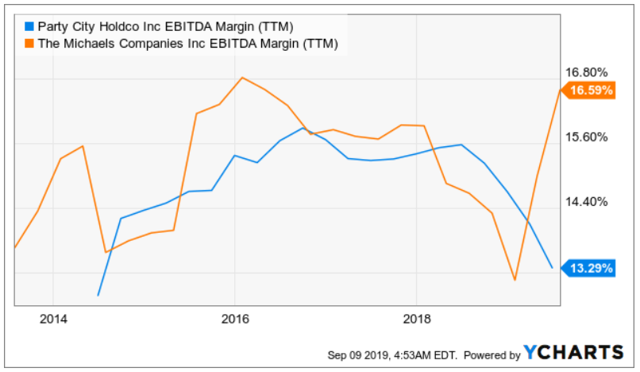 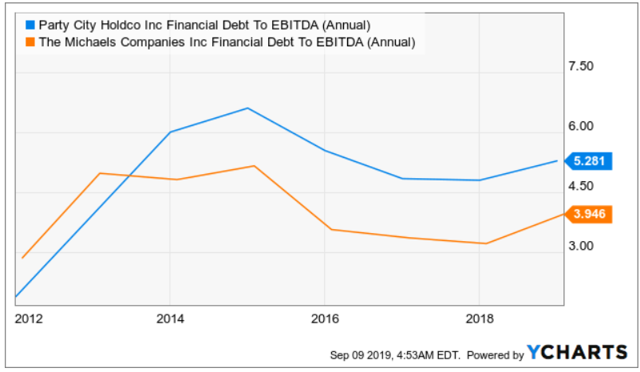 With an EBITDA of $600 million, The Michaels Companies trades at 5.75x, which appears quite cheap. The company reports better EBITDA margin than PRTY. Besides, the company’s Debt/EBITDA is 4.5x, which is less than that of PRTY. Yes, the company is cheap as compared to other competitors.

The market appears to expect a massive decline in the company’s financial figures. Market participants seem to be quite afraid of risks related to the effects of economic uncertainty. Also, the substantial indebtedness of The Michaels Companies may not be appreciated. Those investors who buy shares because the company is cheap should understand these risks well.

Not A Controlled Company - But There Are Large Shareholders

There is another fact that market participants may not appreciate. As shown in the lines below, Bain Capital and Blackstone own a significant stake in the company, which used to be a controlled company:

As a result of the equity ownership structure, certain shareholders will have significant influence over any corporate decision. Minority shareholders may see how decisions taken by the Board of Directors don’t benefit them. The lines below offer further details on the risk:

The Michaels Companies appears to be very cheap as compared to other competitors. It reports a more significant EBITDA margin and smaller Debt/EBITDA ratio than PRTY, but the company’s EV/EBITDA is lower than that of PRTY.

It is difficult explaining why the valuation is low. Market participants may be worried about the company’s debt. They may not appreciate the decline in the store count. Also, investors may be expecting that the effects of economic uncertainty could damage the company’s business. Buyers of the company’s shares should understand these risks. When the market is so bearish on one name, making a turnaround is not that likely.