Stratasys, Inc.(NASDAQ:SSYS) is a 3D printer that fell from grace after the 2012-14 additive manufacturing (AM) euphoria. Since then, the company has increased R&D and made a series of acquisitions in an attempt to right the ship and keep patent expiration from eating away at their top-line like it has so many of their peers.

SSYS has found some success in the aerospace vertical carving out a niche there. However, overall revenues continue to stagnate despite the capital spend of the past few years. Management has shown some worrying signs of late and the company still lacks a CEO, with interim CEO Elan Jaglom holding the position for over a year now.

I fear pressure is being put on pure play AM companies like SSYS by the introduction of HP and GE into the already crowded industry. That, coupled with economic uncertainty that has manufacturing slowing makes SSYS a tough place to put cash right now.

I first wrote on SSYS back in July of 2018 when shares traded around $20/share. I was bearish on the name then and despite underestimating some aspects of SSYS at the time, recent developments have confirmed to me the Sell rating on the company is warranted.

What I didn't account for in my last article was although acquisitions and the R&D spend caused margin compression in the near term, it also brought Aerospace leadership within the AM industry and increased SSYS's IP.

SSYS continues to shine in their aerospace AM segment. In Q2, the company extended their Boom Supersonic partnership by seven years and showcased their FDM technology used by Marshall Aerospace and Defense. They also highlighted their partnerships with impressive companies like Airbus(OTCPK:EADSY). SSYS prints the curtain header for the Airbus A350 XWB, the header is reportedly the largest 3D printed part made for passenger aircraft.

New products continue to be introduced at SSYS maintaining their leadership in the aerospace vertical and leading to strong sales of production-focused 3D printers and materials.

Perhaps the clearest symbol of SSYS's aerospace cred is the NCAMP qualification from the National Institute of Aviation Research(NIAR), which their Fortus 900mc and ULTEM 9085 machines received for their Aircraft Interior Solution configuration. They are the only company to hold such a qualification. The revenues from those systems are just beginning to trickle in this quarter, meaning some tailwinds are expected in 2020.

That wasn't the only new product this year that came as a result of the last years' spend, the F120 and the V650 machines are also expected to begin adding to revenues in H2 2019.

Still, despite being wrong about this segment of SSYS's business I maintain my overall bearish thesis due to falling revenues, management issues, and industry-wide AM manufacturing decline.

SSYS saw revenues fall some 4.1% YoY in Q2 although this quarters figures were hurt by currency headwinds. The revenue news is really worse than that however as SSYS was able to buoy poor systems(-10%) and product(7%) sales by increasing pricing for service and customer support. This is obviously an unsustainable model. 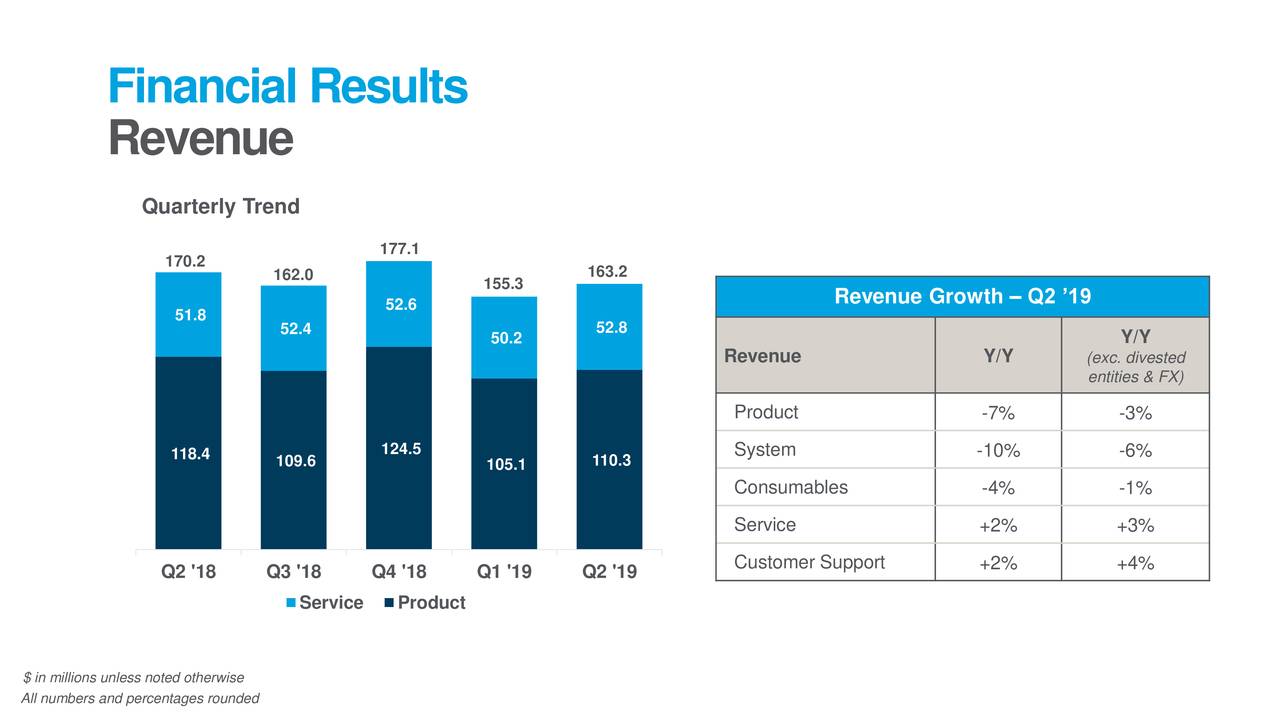 The good news, however, is that operating income, margins and EBITDA all increased as SSYS's many acquisitions and businesses begin to focus on efficiency and find some synergies. This is also evidenced in the falling operating expenses(-6% YoY). 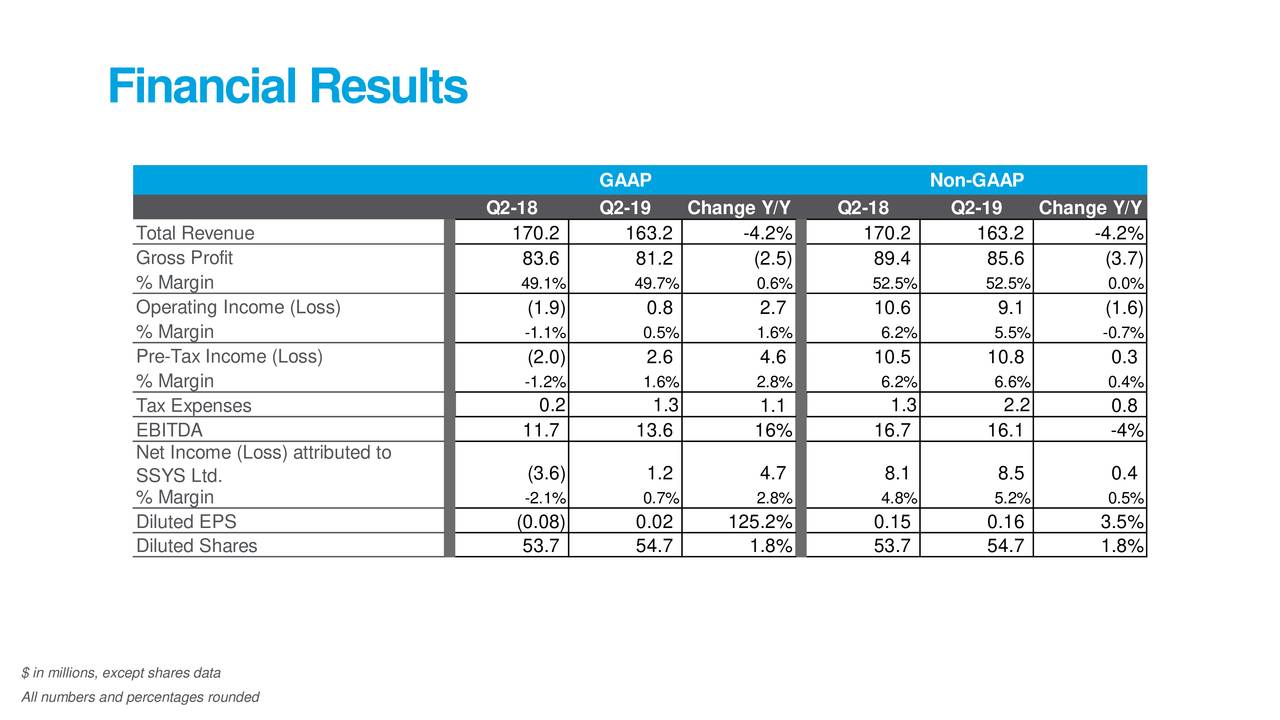 SSYS does also maintain a strong cash position of $366 million at quarter end and has no debts.

In the Q2 earnings call the company did have to tell investors they would be hitting the lower point of revenue guidance meaning $670 million vs. originally estimated $700 million. Although the net income loss figures improved from $22 million on the low end to just a $17 million loss on the low end.

I fear with all the changes made to SSYS's business that a 10% drop in system revenue and a 7% drop in product revenue, coupled with a lack of profitability, is not a winning recipe for wooing investors. Even worse, it appears manufacturing headwinds are here to stay.

Recently, after reviewing multiple stocks within the AM industry I began to see a pattern emerge with revenue growth falling across the board.

I believe there are two main causes for this:

Three out of four economists see a recession coming before 2021. That alone means little, but what is certain is that things are uncertain. Whether its Brexit, or the inverted yield curve, or the Argentinean Market decline, or the poor economic data out of Germany, or the trade war with China that could turn on a tweet, certainly things are(at least) uncertain and that's not good for manufacturing.

When the US ISM manufacturing index falls below 50 the sector is considered to be in contraction and I believe some of the higher cost systems and services of the AM industry are feeling the effects.

2) The introduction of large industrial powerhouses GE and HP into the AM business.

GE and HP have caused a surplus of AM options with their entrance into the industry and now represent stiff competition for the pure play publicly traded AM companies. SSYS's and DDD, among other 3D printing veterans, have been subject to patent expiration which has opened up opportunity for GE and HP in the space over the past decade.

HP also recently opened a large-scale 150,000-square-foot 3D printing and Digital Manufacturing Center of Excellence (COE) in Barcelona where they work with the likes of Siemens, Jaguar and Volkswagen. This facility should have smaller 3D printing players shaking in their boots.

Then there is GE additive which, among other tech, uses liquid-based stereolithography (SLA) printing process that became available only after 3D systems(DDD) patent expired in 2014. This has helped them land huge contracts with the like of General Dynamics(GD).

These two entrants make me fear for the competition.

I would like to also note an article here on SA by a former SSYS bull, Faloh Investment, who notes management may not be aligned with shareholders. You see, back in 2018 SSYS spun-off their Evolve product which investors had funded for over 10 years, then they retained only a minority interest and took a $5 million dollar loss for R&D costs to boot.

When a caller brought up the issue during the Q3 2018 earnings conference the answer from management was astounding:

All of this on top of the fact that SSYS still lacks a permanent CEO, we heard from interim CEO Elan Jaglom(very briefly) in the Q2 conference call, but I must admit it is unusual to have to hear from an interim CEO for now four earnings calls.

If I held shares of SSYS this would worry me.

Valuing SSYS as a business is difficult. They do have certain tailwinds behind them with the introduction of new systems and aerospace products which will add to revenue in 2019 and beyond. However, overall revenues continue to be stagnant and it seems the industry as a whole is under pressure. Even worse SSYS is unable to reduce costs enough to gain profitability returning a net loss year after year.

2019 won't be any different as the net loss is expected between $17 and $20 million with revenues of around $670 million. It's difficult to value this company at anything more than 1.5x revenues given headwinds and historical returns.

I fear current headwinds are too much for SSYS as the company continues to execute its model without any real growth or profitability in sight. The CEO left the company back in 2018 and even now, over a year later SSYS still has just an interim CEO in his stead. HP and GE's entrance into the AM industry has caused crowding amid a manufacturing slowdown meaning headwinds are on the horizon. I believe SSYS is close to fair value at the moment, but management's failings and perhaps even questionable loyalties mean I am placing the Sell tag on SSYS while it trades at over 37x fwd earnings.

William Daniel
1.04K Followers
Fortune Markets and Economy Reporter. Prev. Business Insider Investing Reporter. MS Business Journalism. I'm mostly a passive investor these days(and I think you probably should be, too), but I still "seek alpha" with a portion of my portfolio.The more I learn, the more I realize just how much I have to learn. Do your own research...blah, blah, blah...*some quotes about investing or something*
Follow