At the beginning of this year, it seemed like Oasis Petroleum (OAS) could post a turnaround by delivering free cash flows as the company planned to grow oil production while aggressively reducing capital expenditure. But now, it looks like the Houston, Texas-based oil producer will continue burning cash in 2019. 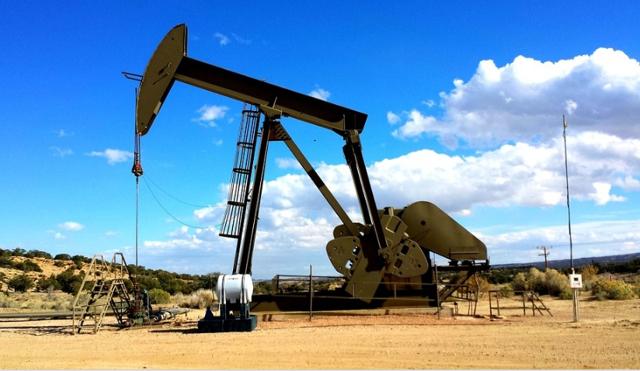 Earlier this year, Oasis Petroleum revealed that it will grow its oil and gas production by roughly 7% in 2019 while reducing its exploration and production capital expenditure. The E&P capital was originally forecasted to drop from $942.2 million last year to $540 million (midpoint of $540-560 million guidance) in 2019. The production growth, combined with aggressive cost-cutting measures, could have pushed the company to free cash flows, marking a turnaround for Oasis Petroleum, which has burned cash flows in the previous years.

Oasis Petroleum's performance, however, has been underwhelming. The company has recently released its financial results for the second quarter in which its adjusted profits dropped to $0.03 per share from $0.09 a year earlier. The company posted a 6.3% increase in production to 84,454 boe per day, but the dip in oil prices pushed the company's earnings lower. Oasis Petroleum's average sales prices (ex. derivatives) for crude oil and natural gas came in at $58.87 per barrel and $2.29 per Mcf, depicting drops of 10.6% and 32.3%, respectively, on a year-over-year basis. 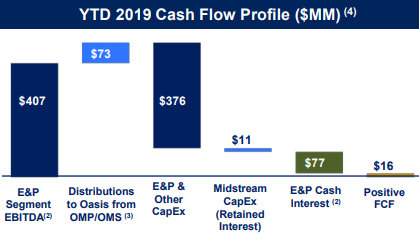 The good thing is that Oasis Petroleum's core exploration and production business is generating free cash flows. The company defines free cash flows as adjusted EBITDA (including distributions received from its subsidiaries) in excess of capital expenditure and cash interest. In these terms, the company's exploration and production business generated $16 million of free cash flows in the first six months of 2019. But the bad thing is that the company, as a whole (incl. full midstream capex), is still burning cash. Oasis Petroleum has reported a cash flow deficit (or negative free cash flows) of $102.8 million for the first half of 2019, including a deficit of $95.3 million reported for the second quarter.

Another way of calculating free cash flows, which is commonly used by many investors, is to subtract cash capital expenditure from operating cash flows. Oasis Petroleum generated $435.9 million of operating cash flows in the first half of this year, including $220.4 million in the second quarter (ahead of changes in working capital). But the company spent $525.5 million as cash capital expenditure, including $288 million in the second quarter. In these terms, the company faced a cash flow deficit of $89.6 million for H1-2019 and $67.58 million for Q2-2019.

In short, Oasis Petroleum spent more cash than it received in the previous two quarters. This puts the company in a difficult position for the remainder of the year. That's because commodity prices have fallen in the third quarter from the second quarter. The spot price of WTI crude which averaged almost $60 a barrel in Q2-2019 has largely stayed below $57.35 since the start of the third quarter and was at $55.60 at the time of this writing. The WTI futures currently show oil hovering within the $54 to $56 a barrel range throughout the remainder of the year. Similarly, the Henry Hub spot price which averaged almost $2.56 per MMBtu in Q2-2019 has stayed under $2.37 throughout most of the third quarter and is currently trading at $2.15. In this backdrop, Oasis Petroleum will likely sell its oil and gas at a lower price as compared to the second quarter. This may drag the company's earnings and cash flows, although the negative impact on cash flows will get partly offset by the crude oil and natural gas hedges.

On top of this, Oasis Petroleum has also slashed this year's production outlook. The company now expects to grow oil and gas production by roughly 6% from last year to the range of 86,800 boe per day to 88,500 boe per day. The midpoint of this guidance is 87,650 boe per day which is less than the H1-2019 production of around 88,107 boe per day. This means that investors should expect a slight decline in production in the second half of the year as compared to the first half which could further push the company's earnings and cash flows lower.

At the same time, Oasis Petroleum could continue burning cash flows this year. The company's capital expenditure plan was front-end loaded and was forecasted to drop significantly in the second half of the year as compared to the first half. But the company has now increased its CapEx guidance by almost 15% at the midpoint from its previous forecast to $630 million (E&P capital only). Consolidated capital guidance (including midstream capital) has been increased by 13% to $854.5 million. Consequently, the decline in CapEx in H2-2019 from H1-2019 won't be as large as previously anticipated.

This is one of the biggest increases in CapEx forecast we've seen in the E&P space and comes at a time when oil producers are facing growing pressure from investors to curtail capital expenditure. This could make the company's operations more efficient in the long-run and may lead to higher levels of production from 2020. But in the short-term, the increase in expenses can have a negative impact on the company's free cash flow prospects. The company's cash outflow as capital expenditure is going to be bigger than previously thought. At the same time, its cash inflow from operations will likely head lower due to the weakness in oil prices and the small drop in production. Due to these reasons, I believe Oasis will likely continue reporting negative free cash flows in 2019.

Oasis Petroleum, however, has a great asset base, with exposure to two of the best oil basins in North America - the Williston Basin and the Delaware Basin. Here, the company has access to almost 2,000 drilling locations (gross) from where it can produce hydrocarbons for decades. Its core exploration and production business is also generating free cash flows on an adjusted basis. I think the company's long-term outlook is still looking good. Oasis Petroleum will likely grow production while reducing capital expenditures in 2020 which, combined with improvement in commodity prices, can push the company to free cash flows. But the shale driller will likely continue reporting cash flow deficits in the short term, and that could weigh on its stock's performance.

Shares of Oasis Petroleum have fallen by almost 34% in the last six months. The stock has underperformed against some of its closest peers, such as Continental Resources (CLR) whose shares have fallen by 24% in the same period. The underperformance, however, hasn't made Oasis Petroleum an undervalued stock. The company's shares are currently trading almost 17x next year's earnings estimates, as per data from Thomson Reuters. This makes it more expensive than other oil producers, such as Continental Resources and EOG Resources (EOG) who have a superior cash flow profile and whose shares are priced between 10x and 15x next year's earnings estimates. I believe investors should avoid Oasis Petroleum stock for now.