I removed Flexion Therapeutics (FLXN) from our Growth Stock Forum model portfolio two years ago - right before the FDA approval of Zilretta. I thought at the time the stock was close to being fully valued and that Flexion had a lot to prove on the commercial side. I anticipated a slow launch because of the usual hurdles (getting adequate coverage and a permanent J-code), but the launch was even slower than I anticipated and I gave up on my plans to purchase the stock at lower levels. I am finally more bullish on Flexion after seeing Zilretta's uptake improve in the second quarter, though I don't anticipate putting the stock back to our model portfolio at the moment.

I was encouraged after Flexion reported Q1 results and said that Zilretta generated $5.1 million in net sales in April, which represented almost half of the total Q1 sales of $10.6 million. I was concerned that was a one-off at the time and that Zilretta’s growth in Q2 may not live up to the strong month of April. It turned out the increased demand was real – Flexion reported Q2 net sales of $17 million which means combined sales for May and June were $11.9 million. That number suggests increasing demand throughout the quarter. 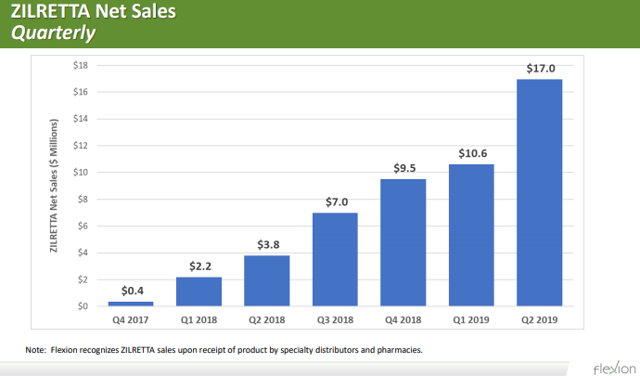 Management reiterated the full-year revenue guidance range of $65-80 million and it appears the company will at least meet the low end of that range, and possibly generate full-year sales of around $70 million, which is the current Street consensus.

The company shared additional metrics in the Q2 earnings report and they suggest demand is growing and that it is broad-based. The number of accounts with cumulative purchases of 51+ Zilretta units rose to 461 in Q2 and 848 accounts ordered 11-50 units. There is also a growing number of sporadic users or early (and conservative) adopters who purchased a cumulative amount of 1-10 units – 1,424 such accounts by the end of Q2. 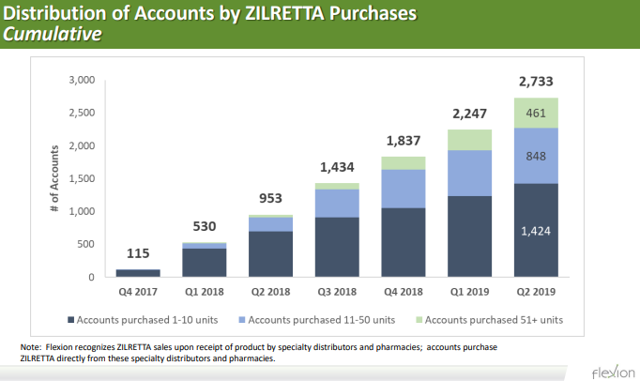 These numbers suggest there is a lot of room for Zilretta to grow since a small number of accounts is responsible for the bulk of units sold. Those 461 accounts (17% of total) purchased 70% of total units since launch. 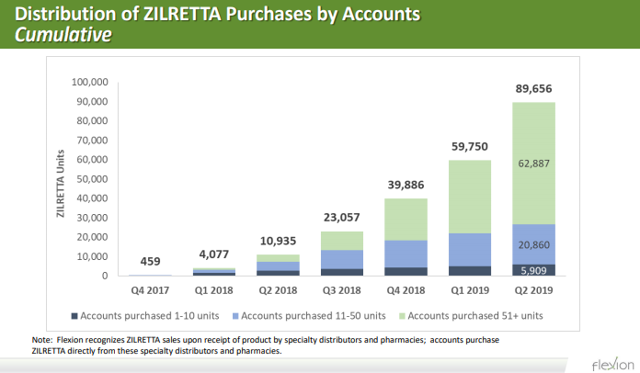 The questions here are can Flexion grow Zilretta sales at least in line with current Street expectations and will that be enough to push the share price higher? I think that meeting the consensus would be enough to support the current share price and possibly even drive the stock higher and that showing strong growth in the second half of the year could push the share price to the high teens. I would define strong growth as net sales coming in at least $1-2 million above the current Street consensus and the company meeting or exceeding the mid-point of its full-year guidance range – the mid-point is $72.5 million and is $2.5 million above the Street consensus.

Opportunities beyond the knee and upcoming FDA decision on label expansion

Opportunities for Zilretta beyond the knee are more a long-term growth driver, especially considering this year’s clinical setback. A non-safety issue emerged in the phase 3 trial of Zilretta in hip osteoarthritis (‘OA’) pain, and this resulted in the inability to deliver a full dose in a small number of trial participants. Flexion then paused enrollment and dosing to work with investigators to address the root cause of the issue. Management’s current estimate is that enrollment will resume in the fourth quarter, which means a lot of time has been lost and that this trial will report results much later than we could have assumed at the start of the year.

The company also plans to initiate a phase 2 trial of Zilretta in shoulder OA and in adhesive capsulitis (frozen shoulder).

If Flexion can grow Zilretta net sales to $400 million by 2024, the present value of the company would be approximately $21 per share and it would be around $30 per share based on $500 million in net sales (model available to subscribers).

Flexion also has a PDUFA date in October to expand Zilretta’s label to include repeat administration. The current label has a limitation of use to one injection and removing this limitation is likely to improve Zilretta’s uptake in late 2019 and in 2020.

Flexion also has a preclinical gene therapy candidate for knee OA pain – FX201. The company plans to initiate a clinical study this year. FX201 is designed to stimulate the production of anti-inflammatory protein IL-1Ra when inflammation is present in the joint and it could potentially reduce pain and even modify the disease. The company estimates the therapeutic effect could last at least one year. I would not count on this candidate just yet as I want to see supportive clinical data first.

And finally, the company made a deal with Xenon Pharmaceuticals (XENE) this week for global rights to Xenon's XEN402 (now called FX301) for the potential management of postoperative pain via peripheral nerve block. Flexion expects to start a clinical trial in 2021.

These preclinical/early-stage assets could add considerable upside to Zilretta in a few years, but it's too early for them to matter or assign value.

One of the risks for Flexion is its high cash burn. Zilretta sales have grown from 0 in Q3 2017 to $17 million in Q2, but cash burn has remained high. To be fair, Flexion has $22 million in accounts receivable, meaning the company has yet to collect a substantial portion of sales achieved in prior quarters, but adjusted for changes in accounts receivable, cash burn in the second quarter would still be high at $33 million. 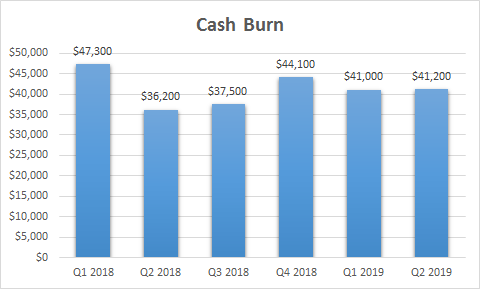 I estimate that the company needs to achieve an annualized net sales run rate of $200 million to achieve cash flow breakeven.

With that in mind, Flexion is still well capitalized with $176.6 million in cash and equivalents at the end of Q2 and the company has secured up to $60 million in non-dilutive funds, of which it has drawn $40 million in the third quarter. Management estimates the current cash balance and the expected proceeds from the new debt financing along with future sales of Zilretta and ‘prudent expense management’ will bring the company to profitability.

However, I would not exclude another dilutive round in 2020 or 2021, depending on where the stock trades. For the time being, I am not concerned with the outstanding debt (the company has $201 million in outstanding 2024 convertible notes with a conversion price of $26.78 and $40 million it has drawn in the third quarter) as Flexion has enough time to grow Zilretta sales and to either have the stock trading above the conversion price or to refinance the debt in a few years, though I would be disappointed if the stock is not above the conversion price by 2024.

Going back to the cash burn itself, if Zilretta grows in line with expectations, I would expect Flexion’s cash burn to drop to $80-90 million in 2020 and to reach cash flow breakeven by the end of 2021. As mentioned earlier, I am not sure the existing cash balance will be enough to get there and think the company may do a small/medium-sized equity offering in 2020.

Flexion is in a better position after Zilretta’s uptake has accelerated in the second quarter of 2019. Quarterly sales and the FDA decision to remove the limitation of use in October are the main near-term catalysts, and longer term, expansion beyond the knee for Zilretta and, eventually, FX201 and FX301, could strengthen the company’s position and expand the addressable market. The main risk in the near-term is Zilretta’s uptake and the associated cash burn – if sales underperform expectations, the company’s cash position will drop faster and be depleted sooner, which would put Flexion in a dire financial position considering the total gross debt of $241 million.

I publish my best ideas and top coverage on the Growth Stock Forum. If you're interested in finding great growth stocks, with a focus on biotech, consider signing up. We focus on attractive risk/reward situations and track each of our portfolio and watchlist stocks closely. To receive e-mail notifications for my public articles and blogs, please click the follow button. And to go deeper, sign up for a free trial to Growth Stock Forum.