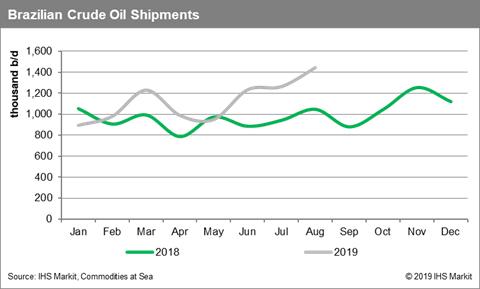 Brazilian oil production increased last month and is now estimated to be approaching 2.8 million b/d. Growth has reached 8% year-on-year. The Lula field, in the pre-salt Santos Basin, has been the largest producer. More than 95% of the country's total oil production now comes from offshore fields, with Petrobras (PBR) operating more than 92.5% of the overall output. 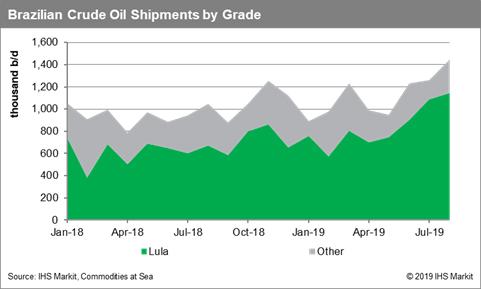 In terms of Brazilian crude oil importers, China has been dominating the market, after absorbing 56% of barrels shipped in 2019, its market share has increased significantly since last year, when it stood close to 48%. China's appetite for Brazilian grades is expected to last, which increases the interest for foreign majors to invest in the country's new projects. Petrobras has also been investing in storage facilities in South East Asia, to secure more stable services to China. 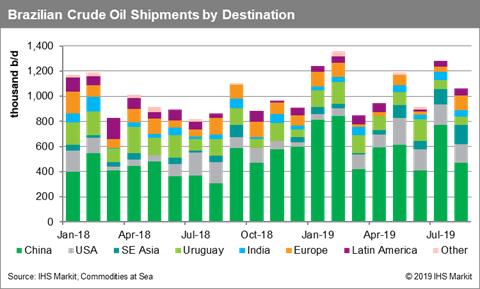 The country's crude oil production faced pressure earlier this year, which was primarily driven by maintenance of the FPSO Cidade de Mangaratiba platform, operating in the Campo de Lula. However, exports of crude oil have been quite strong this year, having expanded by around 15% year-on-year between January and August 2019, as data by IHS Markit Commodities at Sea suggests.

There is still optimism, with the National Petroleum Agency (NPA) expecting oil production volume from Brazil to "reach one of the highest in the world" during the next couple of years. Two more auctions will be held this year, scheduled for October and November which will include pre-salt areas. Revenues could reach BRL 11 billion (USD 2.9 bn).

The collapse of Venezuelan crude oil production and exports created opportunities for Brazil, with demand for the Latin American country's heavy grades rising fast. Higher interest for its Lula/Buzios grades allowed exports to China to boom since the second quarter of the year. The second half of 2019 looks very promising for the country, as new offshore production comes onstream.

It's also very interesting to note that the US has been relying more on Brazil for its crude imports. Volumes shipped to the US from Brazil have increased rapidly since 2018, with year-on-year growth standing close to 19% for the period between January and August. This still represented only 5% of US imports between May and August 2019, but with impressive growth to report from 2.2% in 2018. Especially as this happened while US imports have been quickly declining from 4.5 million b/d in 2018 to levels marginally above 3.5 million b/d in 2019 so far. With Saudi Arabia and other OPEC members having extended production cuts, the US will heavily rely on exporters across the Americas, to replace volumes previously imported from Venezuela. The future looks very promising for Brazil.

The region has become much more important for the shipping industry as well, with more VLCC owners targeting the market by repositioning ballasters to Brazil, as interest in Asian crude importers in Latin American grades, such as Brazil's Buzios and Lula remains high. This will last as long as flows from Iran remain close to zero.

Markit
2.37K Followers
IHS Markit (Nasdaq: INFO) is a world leader in critical information, analytics and solutions for the major industries and markets that drive economies worldwide. The company delivers next-generation information, analytics and solutions to customers in business, finance and government, improving their operational efficiency and providing deep insights that lead to well-informed, confident decisions. IHS Markit has more than 50,000 key business and government customers, including 80 percent of the Fortune Global 500 and the world’s leading financial institutions. Headquartered in London, IHS Markit is committed to sustainable, profitable growth.
Follow
1 Comment