Hurricane Dorian, which devastated Bahamas one week ago, affected the East Coast of the U.S. generating tremendous amounts of rainfall and causing damages in Florida, the Carolinas and Georgia. 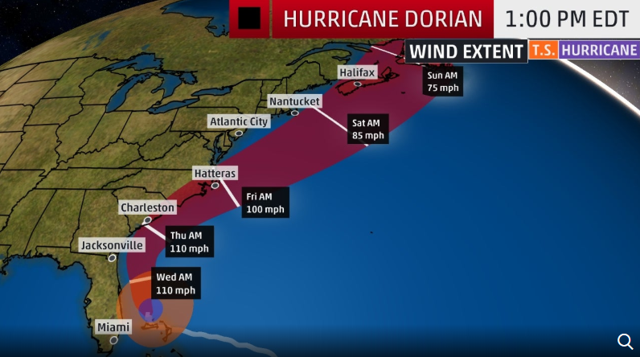 According to analysts at UBS, Hurricane Dorian could cause insurance industry losses in the range of $5 billion to $40 billion with a base-case at $25 billion. Although Florida-exposed insurers and reinsurers might be adversely affected, this event which could change the lives of thousands of people, may also create some opportunities in the investment field. Historically, one of the best times to invest in insurance can be following a major event provided that event causes rates to rise significantly. One of these opportunities might be Blue Capital Reinsurance Holdings (NYSE:BCRH), a Bermuda-based reinsurance company.

Blue Capital Reinsurance Holding is a reinsurer which was exposed to the Florida insurance market over the last years. The company suffered significantly from the adverse impacts of hurricanes Maria and Irma. Their book value shrank, their dividend was cut, and the stock price plunged accordingly.

However, earlier in 2019, after several years of losses, Blue Capital decided to cease active operations, pursue an orderly run-off of its liabilities and portfolio, and redistribute the excess capital to its shareholders over the next three years.

Unfortunately, Hurricane Dorian summoned up old fears related to the reserve deficiency. Indeed, there is a risk that Blue Capital might be affected by Dorian. In fact, all reinsurers exposed to the Florida market might be adversely impacted.

However, in Blue Capital’s case, the situation is slightly different from its competitors. Before deciding to cease operations, Blue Capital decided to lower its exposure to the riskiest markets. One of them was Florida, where the Atlantic hurricane season might be very costly for property and casualty insurers and reinsurers.

For the first six months of 2019, the premiums written by Blue Capital for the Florida market amounted to $0.1 million or a 98% drop compared to last year in the same period. 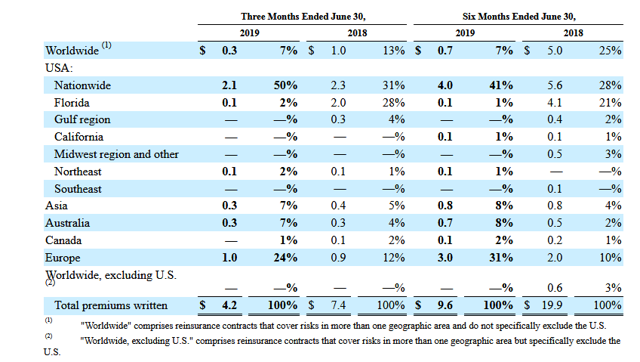 Essentially, Blue Capital decided to exit the Florida reinsurance market as much as possible.

In the latest 10-Q, Blue Capital estimated that a 1 in 100-year event as a Florida hurricane should cost $13 million net of reinsurance, or an adverse impact on shareholders’ equity of 14%.

Under the worst-case scenario, hurricane Dorian might cost around $13 million to Blue Capital, impacting the book value per share adversely by around $1.48, a 14% drop. Excess capital available would decline to $8.88 per share or a deteriorated return of 10% at the current price in a worst reasonable case scenario.

But let's try another method to extrapolate the more likely cost of hurricane Dorian.

In other words, the losses represented around 900% of the gross premiums written for the Florida exclusive market. In that case, we might be able to reproduce the same exercise based on the 2019 figures.

The problem is some people say that it might be the worst hurricane they have ever seen, even though the current outlook is more optimistic than it was one week ago. In that case, Dorian might be more expensive than Harvey, Irma, and Maria together. Let’s assume Dorian might cost five times what the Unholy Trinity's (Harvey, Irma, and Maria) cost.

In this case, Dorian will impact the book value of the company adversely by $5 million in total which is only 60¢ per share. In this case, the potential upside is “only” $1.70 per share or 21% after Hurricane Dorian struck Florida.

Last week, BCRH's stock price oscillated near to $8.07. Based on that stock price, BCRH had 10%-27% potential upside. 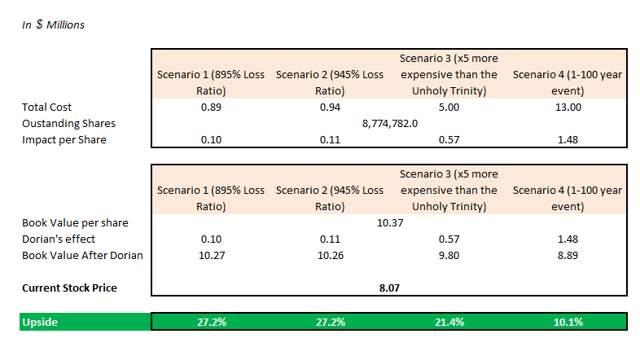 As the hurricane weakened over the last days, the stock price increased and the potential upside dropped accordingly. Nevertheless, a safety margin is still there.

At the current price ($8.78) as of this writing, the potential upside is 1.3% to 17% after the adverse impact of Hurricane Dorian on the book value. In addition, Blue Capital's shareholders might enjoy excess capital distribution, as the reinsurer declared recently a $1.51/share special dividend. Although I'm not willing to increase my position in Blue Capital, I remain long on the stock and might add more shares, following Hurricane Dorian's incurred loss estimation provided by Blue Capital. 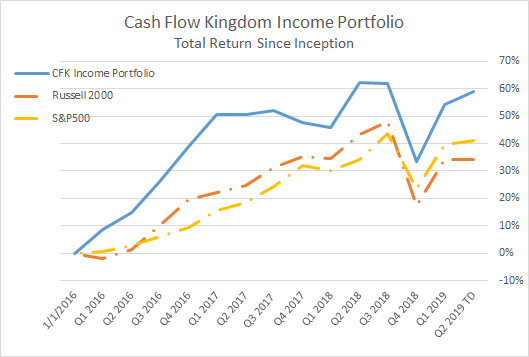 We accomplished while also producing a very attractive portfolio dividend stream in the 7-9% range. A focus on strong and growing company cash flows, as well as management alignment and capital allocation skills, is at the core of what we do. Please join us at Cash Flow Kingdom, "the place where cash flow is king," to see if we can help you achieve your financial goals.

The CrickAnt
831 Followers
Author of Cash Flow Club
The Investment Community where "Cash Flow is King"
Considering myself as Finance enthusiast, I'm investing on stocks since more than 3 years by using a value approach and by following famous Warren Buffett's piece of advice: "It's far better to buy a wonderful company at a fair price than a fair company at a wonderful price."

I am currently contributing articles to Darren McCammon's service Cash Flow Kingdom, "The place where Cash Flow is King".

Disclosure: I am/we are long BCRH. I wrote this article myself, and it expresses my own opinions. I am not receiving compensation for it (other than from Seeking Alpha). I have no business relationship with any company whose stock is mentioned in this article.