This is the latest one in a series of (big) acquisitions.

Management revels in operational excellence, which it combines with value creation through external growth, a rare combination.

Priced at a lofty valuation of 32 times earnings, although massive earnings growth is on its way.

This week, Kinepolis reported its biggest takeover ever, acquiring BJR, a cinema chain in Michigan, the USA. This also marks the start of Kinepolis' expansion into the USA.

In my opinion, this is a great deal and I stand completely behind the management. Clearly, I am not alone, as the stock price had increased by more than 10% following the news, before coming back down by a few percentage points.

Despite having a market cap of more than 1.56 billion euros, there is no U.S. ticker for Kinepolis at this point. The stock trades on the Belgian stock exchange and is more than sufficiently liquid for foreign investors (spread of 10 cents, or 0.2%). However, foreign investors should note that the Belgian withholding tax stands at 30%. "Luckily", Kinepolis yields just above 1%.

Kinepolis' strategy is clear and straightforward. Expand the portfolio of movie theatres, increase the profitability of the acquired assets, pay out 50% of profits and retain the other half to repeat the process.

Next, another large part of profit comes from the so-called In-Theatre Sales (ITS). The importance of this business division has increased over the years, as Kinepolis is continuously innovating in this area. For example, today, all Kinepolis theatres feature a self-service shop. This technology is perfectly scalable and thus has increasing margins. Furthermore, there are 'coffee corners', 'Leonidas chocolate stores' and more.

Business-to-Business: events, avant-premières, conferences... they all are organized and held in theatres of Kinepolis. Furthermore, Kinepolis rakes in ad revenue. Even more so in Belgium, as it has taken over Brightfish in 2011, a marketing creator, which obviously has a lot of synergies with Kinepolis itself.

Two smaller divisions are Kinepolis Film Distribution, which distributes movies in Belgium and Luxemburg and Digital Cinema Services. This division acts as an intern consulting firm but shares its expertise with third parties as well.

Last, as Kinepolis has built and bought several movie theatres over the last years, it now manages that Real Estate Portfolio closely as well. Kinepolis rents out more than 90,000 square meters to third parties (cafés, shops, restaurants...), providing extra income and realizing synergies with the movie theatres itself.

From Belgium to Europe...

Ever since Kinepolis had trouble expanding in Belgium (the regulator fears market concentration), it has been going on a takeover spree in Europe. Today, it has next to its 11 movie theatres in Belgium, plus an additional 42 movie theatres in Europe, which makes for a total of 53 movie theatres in the region. Belgium remains the most important market, however, for Kinepolis. Although the relative share of Belgium has dropped to less than 25%

Kinepolis still has a lot of upside potential in Europe, a very fragmented market in terms of movie theatres. 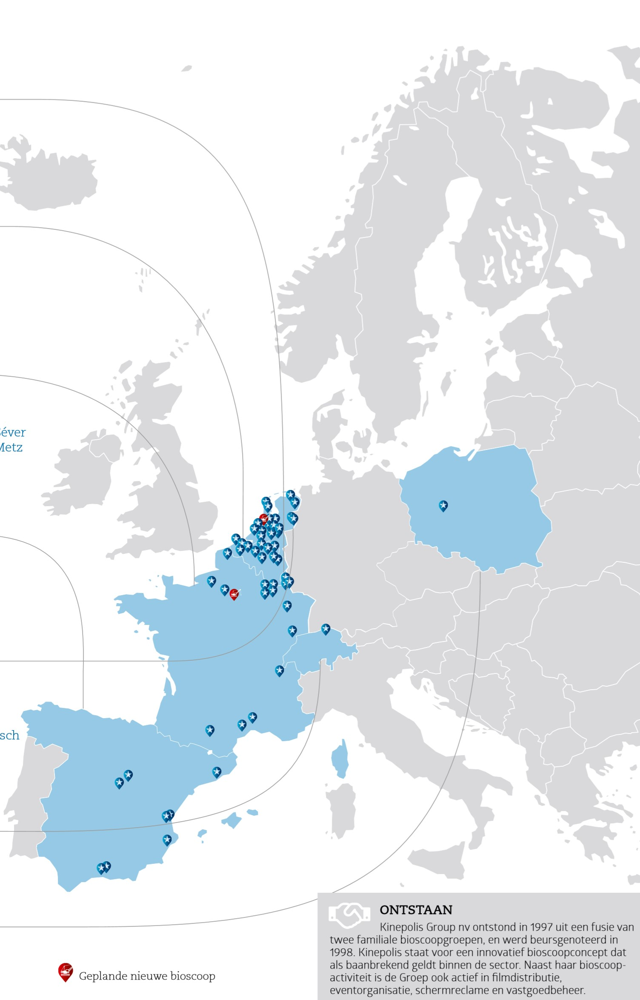 At the end of 2017, Kinepolis expanded into Canada. It took over Landmark, which has a market share of around 10%, being number two in Canada. Kinepolis now operates in 45 additional movie theatres, owning around a quarter of them, renting the other buildings. However, 96% of Kinepolis' visitors go to a rented movie theatre.

At the end of 2018, Canada was responsible for 11.6 million of Kinepolis' 35.6 million visitors, or around a third. Management expects profitability in Canada to double, underlying Kinepolis' operational excellence. For now, EBITDA per customer is lower in Canada, as Kinepolis does not own the movie theatres. 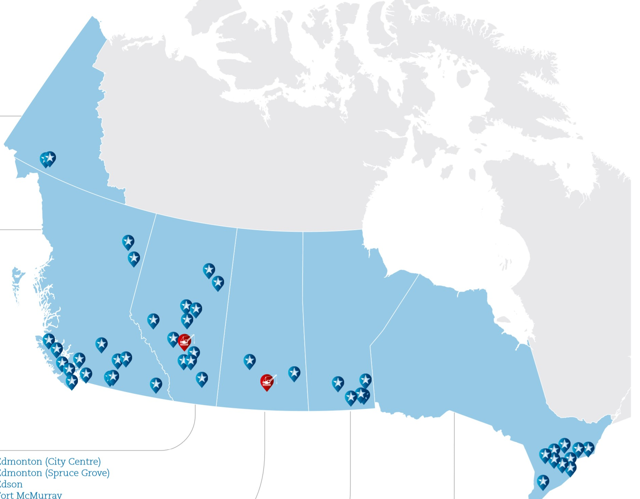 On the 2nd of September, Kinepolis reported having acquired MJR Digital Cinemas (MJR) in Michigan. 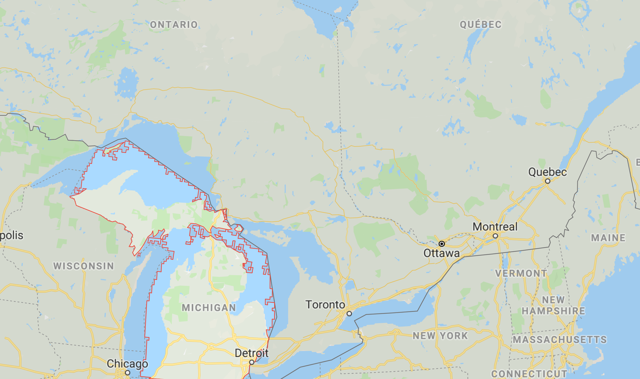 Kinepolis paid €137.2 million euros for full ownership. Revenue stands at 81.2 million dollars and the annualized EBITDA of the group stands at 18 million dollars. Kinepolis thus only paid around 8.4 times the EBITDA, which is way less than the valuation of Kinepolis itself, which will be discussed down below.

The many acquisitions are the reason behind the decline in EBITDA/customer. I do believe that Kinepolis should be able to reach a ratio of more than 4€ per customer (+20%). However, this number is dependent on further acquisitions and whether Kinepolis will own the property or rent it out.

In fact, the EBITDA per customer on a like-per-like basis goes up. It is by doing takeovers, of companies with a lower EBITDA/customer, that the ratio takes a hit each time. Management applies its scalable products (Real Estate portfolio management, Self-Service in-theater sales, cutting costs...) and strategy on the taken-over movie theatre, and finally profits and EBIDTA/customer increase.

On a per-share basis, earnings have grown by 5.6% per year, on average, while revenue has increased 12% per year.

Even though earnings have increased nicely, net debt has been increasing immensely as well, by more than 18% per year!

This is driven by the take-over spree and will increase even more this year given the acquisition of MJR. Net debt will increase to around 410 million euros or more than 3.2x expected EBITDA.

The reason that Net Debt/Equity is lower than you would expect given that Equity/total assets stand at 26%, is because Kinepolis borrowed money last year, and stored is as cash on the balance sheet.

In the first half of 2019, Kinepolis has seen a y/y EBITDA growth of 10.6%. This is so high since last year's numbers were lower given the World Cup Football.

The number of visitors is up 3.7%, but net profit just 0.9% as Kinepolis is building several new complexes. Furthermore, it is noteworthy that revenue of Brightfish almost doubled over the last half-year.

Over the coming years, both revenue and profits of Kinepolis should jump up, as they improve the operations of movie theatres in Canada, and MJR in the U.S. will contribute to earnings as well. One can attribute the expected increase in profitability to the operational excellence of Kinepolis.

On the other hand, management might slow down its takeovers, as debt is growing fast and the net debt/EBITDA is now larger than 3.

At a current price of 55.8, Kinepolis is trading at a trailing P/E of 32.3 and a trailing EV/EBITDA of no less than 15. Double the rate of the recently acquired MJR.

However, Kinepolis has had a lofty valuation now for a long time:

Debt level and valuation. They go hand-in-hand. EBITDA could suffer for a multiple of reasons: Unpopular movies, an outburst of success of streaming services, very good weather in Summer. And if EBITDA drops, this would drive up the net debt/EBITDA ratio, which is already above 3.2x.

On the other hand, 600 million euros of debt are 'long-term', of which €225M has just been funded on a 7-year basis. €206M is short-term debt, while the company only has around €80M cash and receivables. As EBITDA is expected to be more than €130M, the company would be able to pay off all of its short-term debt. But again, if EBITDA decreases because of the aforementioned reasons, management will have to roll-over debt or get even more long-term financing.

EV/EBITDA currently stands at 15. If debt would increase and EBITDA would come down, this ratio could go up rather quickly, which would then have to be compensated by a lower share price.

While trading at a hefty valuation, I believe Kinepolis is a must-have stock. Management has proven its ability to both excel in operational activities and internal growth and to be able to create value through external growth. This is a very rare combination.

This year, the stock price is up less than 10%, while Kinepolis has reported excellent numbers: EBITDA is up more than 10%, visitors up almost 4%. All, while management has struck a good deal in the US, which will boost profit for many years to come, as the EBITDA/customer is 40% lower than the average of Kinepolis.

On the other hand, with a calculated, not yet reported, net debt/EBITDA of more than 3.2, management could (should?) be reluctant to further acquisitions the coming few years. This could slow down revenue growth in the short term.

In the long run, I believe Kinepolis will be a winner. Operating now in just 6 countries in the EU, and only tipped its toe in the US, there remain to be a lot of opportunities for external growth in both continents. With such strong management, it is just a matter of time before Kinepolis will expand further and grow even bigger. 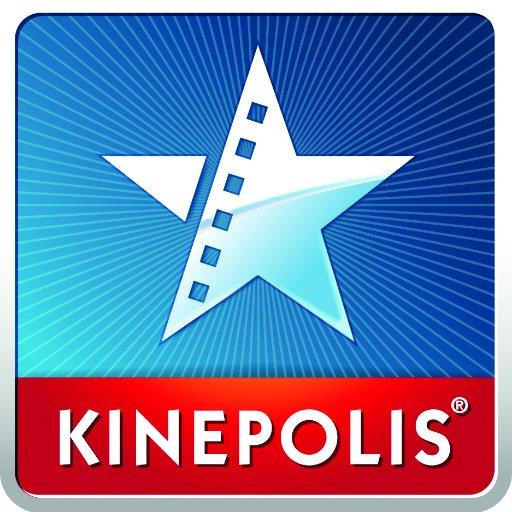 Disclosure: I am/we are long KINEPOLIS. I wrote this article myself, and it expresses my own opinions. I am not receiving compensation for it (other than from Seeking Alpha). I have no business relationship with any company whose stock is mentioned in this article.

Follow Tristan De Blick and get email alerts
+
Add a comment
Disagree with this article? Submit your own.
To report a factual error in this article, click here.
Your feedback matters to us!