The recent decline in the enterprise value of Telenav (NASDAQ:TNAV) is not justified. The company may report less revenue with General Motors installing Google (GOOG) apps in its vehicles. The market pushed the company's EV/sales ratio down to illogical levels. It's trading below 1x sales with an enterprise value of $170-$180 million. Bear in mind that in fiscal year 2019, revenue was equal to $220 million, and General Motors was only responsible for 18% of the company's revenue.

Founded in 1999, Telenav offers wireless location-based services for vehicles. The company provides its connected car platform and sells its services to automobile manufacturers and suppliers.

The lines below offer information on the map-related functions provided by Telenav's software. Besides, note that the company provides a mobile app and different APIs, which extends beyond the vehicle.

In our view, Telenav reports high customer concentration, which, in our opinion, is the company's most significant risk. As shown in the image below, the company works for several car manufacturers, but two companies (Ford (NYSE:F) and General Motors) are a source of a large amount of revenue.

We provide our connected car products and services directly to automobile manufacturers such as Ford Motor Company and affiliated entities, General Motors Holdings and its affiliates, or GM, Toyota Motor (TM), or Toyota. We also provide our products and services indirectly through tier ones such as Xevo, Inc., or Xevo, for certain Toyota solutions; LG Electronics, Inc., or LG, for certain Opel solutions; and Panasonic Automotive Systems Company of America, or Panasonic, for certain Fiat Chrysler Automobiles, or FCA, solutions. Source: 10-k

With this information in mind, the biggest fear of shareholders will most likely be that Telenav may lose its relationship with Ford or General Motors. As a result, the valuation of the company could decline a bit.

The Relationship With General Motors

General Motors announced that it would install Google apps directly into its cars' touchscreen displays. As a result, in September 2019, Telenav lost more than 40% of its market capitalization. Check the image below for more on the massive value destruction:

As shown in the lines below, Telenav accepted that the decision made by GM would damage its revenue line. Sales are not expected to be affected until 2022. However, the market usually reacts to dovish information as it is known. Most analysts will accept that the share price declined. With that, we wondered whether valuation lost is excessive. 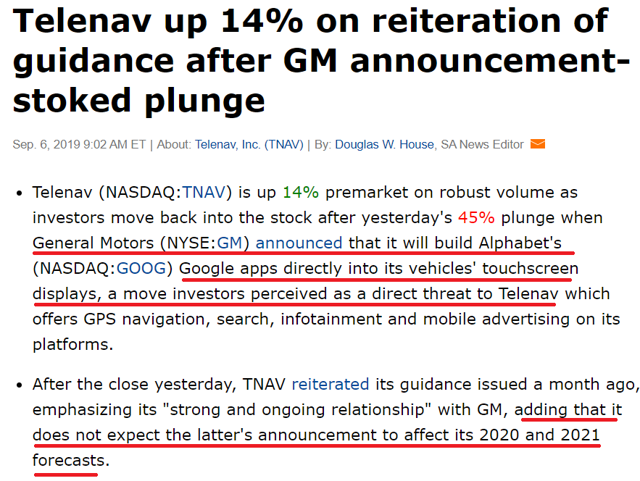 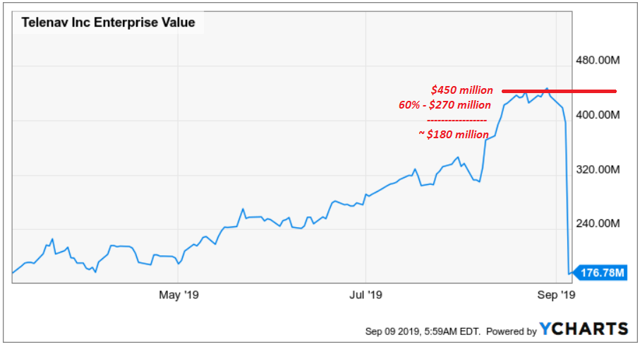 That's not all. In the last annual report, the company noted that both Ford and General Motors included Apple's CarPlay and Google's Android Auto on some of their vehicles. With this in mind, the reaction of the market is even more surprising. Market analysts were most likely expecting that General Motors will use products from Google. Read the lines below for more information on the matter:

As shown in the table below, Telenav makes most of its revenue, 76% in 2019, from the sale of revenue. The rest of the revenue is generated through the sale of the company's services. The table below offers further information on the matter:

Shareholders should understand well that the company's EBITDA was negative in the last three years. As a result, the market is most likely pushing Telenav's valuation down. The net income losses and the EBITDA figures are shown in the image below:

Value investors and private equity analysts will most likely appreciate that in 2019, for the first time in the last three years, the FCF was positive. Both the CFO and FCF increased to $7.514 million and $6.11 million, respectively. Notice that the company does not report restructuring expenses. See more details in the lines and the table below: 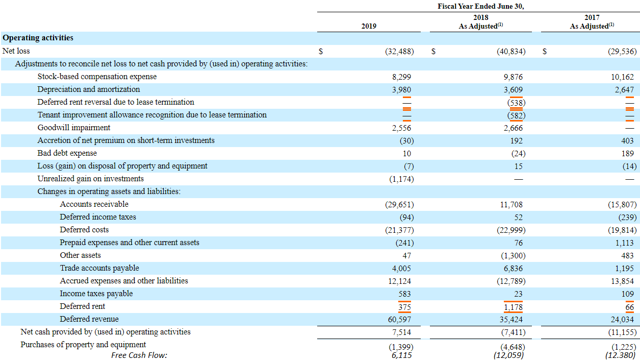 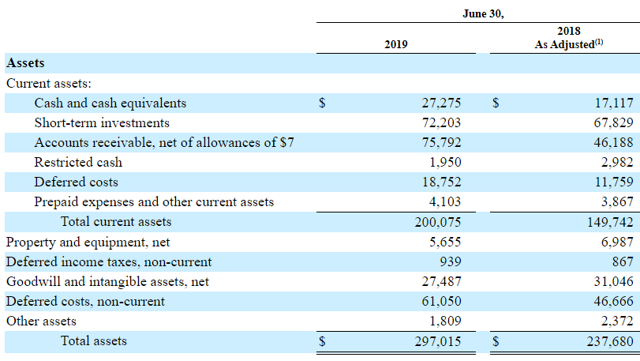 What investors will appreciate on the liability side is that Telenav does not report any debt. The most significant liabilities are accrued expenses and deferred revenue, $135 million. Investors should not worry about the company's amount of deferred revenue. In our opinion, it's very favorable. It means that Telenav receives payments for services that it had still not provided. A list of liabilities is shown in the image below:

Investors will not worry about the table of contractual obligations. The company reports only operating lease obligations worth $13.7 million and purchase obligations of $10.6 million. The image below offers further information on the matter:

The following companies are competitors of Telenav: 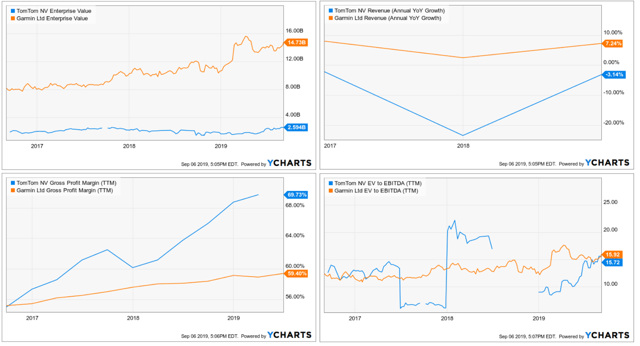 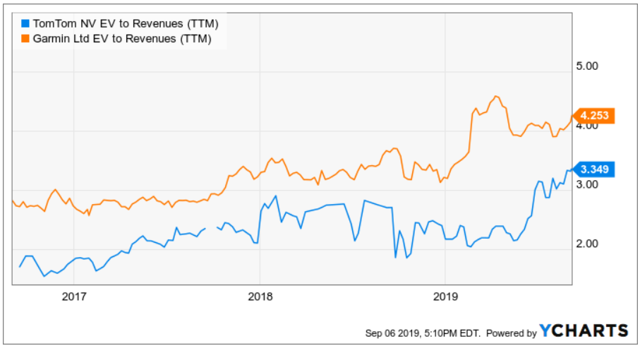 On April 17, 2019, Lear acquired Xevo Inc. for $320.9 million. In the last quarterly report for Lear, the company noted that in 2018, Xevo reported sales of $75 million. It means that Xevo was acquired for 4.2x, which is approximately the ratio of Garmin. Note that the ratio registered in the transaction includes the control premium. It's usually a bit higher than the trading ratio. The image below offers further details on the transition:

In 2019, the company reported revenue of $220 million, which means that the market is expecting a sale decline of more than 68%. In our opinion, the market pushed the share price too much down.

In fiscal year 2019, General Motors was not even the source of 20% of Telenav's revenue. Let's assume that the company will lose 18% of its revenue. Thus, forward revenue of $180 million is reasonable. At 2x sales, Telenav will have an enterprise value of $360 million, which makes more sense than the current valuation of $170-$180 million.

Given the relationship with GM and the total amount of revenue, Telenav's enterprise value declined too much. In our view, the total valuation will most likely be close to $360 million or more. Market analysts need to review Telenav again. Currently, it appears quite undervalued.

Sale of new vehicles is subject to delay due to general economic conditions. If vehicle manufacturers plan to sell fewer cars or consumer demand declines, Telenav will most likely suffer a decline in revenue. As a result, the valuation of the company may decline. Market participants need to understand this risk well.