The Consumer Price Index for All Urban Consumers (CPI-U) increased 0.1% in August on a seasonally adjusted basis, the U.S. Bureau of Labor Statistics reported today. Over the last 12 months, "headline inflation" increased 1.7%.

Core inflation of 2.4% is clearly "moderate" inflation, which has continued at or above 2.0% for more than a year. But today's report seems to be having little effect on equity markets, with stocks up slightly this morning at the opening.

What this means: Social Security COLA

The Social Security Administration will set next year's cost-of-living adjustment based on the average inflation index for July, August, and September, using a different index: the Consumer Price Index for Urban Wage Earners and Clerical Workers (CPI-W).

For August, the BLS set the CPI-W index at 250.112, down very slightly from July's 250.236, and marking an increase of 1.5% over the last 12 months. But this is only the second of three months of data that will set the Social Security COLA for 2020. Because the SSA uses an average of three months, at this point the COLA would be 1.6%, with one month remaining.

The flat CPI-W reading for August broke the track I predicted would lead to an 1.8% increase in the 2020 COLA. At this point, however, it still looks like the increase will be in the 1.6% to 1.8% range. But anything can happen with inflation; it's very difficult to predict. Here are the numbers: 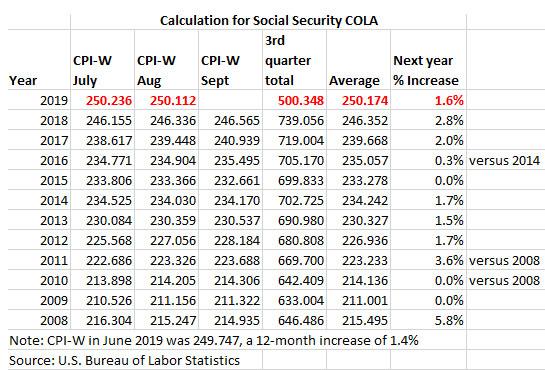 At this point, it's interesting to note that CPI-W is running 20 basis points lower than overall inflation (set by CPI-U) year-over-year. I have noted before that the SSA's complex formula and oddball index often result in the Social Security COLA lagging behind overall U.S. inflation. But the numbers could still balance out next month.

What this means: TIPS and I Bonds

Investors in Treasury Inflation-Protected Securities and U.S. Series I Savings Bonds are also interested in non-seasonally adjusted inflation, which is used to adjust the principal balances on TIPS and set future interest rates for I Bonds. For August, the BLS set the inflation index at 256.558, a decrease of 0.01% from the July number. Essentially, non-seasonally adjusted inflation was flat in August.

For TIPS. The August inflation number means that the principal balances of all TIPS will decrease -0.01% in October, following a 0.17% increase in September. Here are the new October inflation indexes for all TIPS.

For I Bonds. The August inflation number is the fifth in a series of six inflation reports -- from March to September 2019 -- that the Treasury will use on November 1 to reset the I Bond's inflation-adjusted variable rate. At this point, with one month remaining, inflation has increased 0.93% during this period, which translates into a variable rate of 1.86%, up from the current 1.40%.

But even if the inflation-adjusted rate looks to be higher in November, any potential investors in I Bonds should buy their 2019 allocation -- up to $10,000 a year, per person -- before October 31. Buying in September or October will capture the current fixed rate of 0.50%, which is the I Bond's "real return," meaning the return above inflation.

That real return of 0.50% is higher than any TIPS investment out to 23 years, and includes the I Bond's advantages of tax-deferred growth, better deflation protection and flexible maturity. The danger in waiting until November is that the Treasury is highly likely to lower the fixed rate on November 1. (I will be writing more about that in October.)

Here are the numbers so far, with one month remaining:

The September inflation report will be issued at 8:30 am EDT on October 10, and that will set the I Bond's variable rate, which eventually goes into effect for all I Bonds for six months.

Increases in the costs of shelter and medical care were the major factors in the 0.1% increase in headline inflation, the BLS reported, outweighing a decline in the energy index.

Falling energy prices continue to be a strong moderating force for overall inflation, hiding fairly strong inflation throughout the rest of the U.S. economy. Core inflation has remained at levels of 2.0% or higher over the last 12 months, which is a solid measure of "moderate inflation," despite global fears of deflation. This chart clearly shows core inflation trending higher, even as overall inflation is dampened by low energy costs: 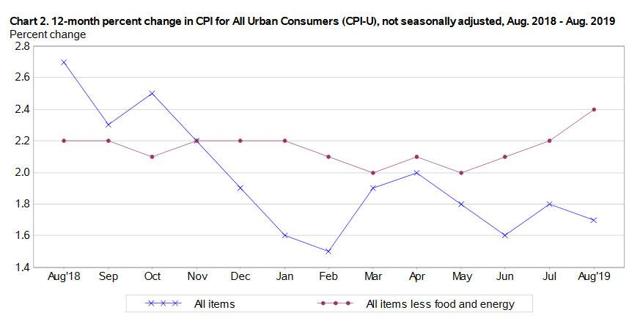 What this means: Future interest rates

This report, which indicates continuing moderate inflation in the U.S. economy, shouldn't have much of an effect on stock markets or the Federal Reserve's plans to gradually lower short-term interest rates.

The Wall Street Journal this morning noted that "a separate report showed real average hourly earnings, a measure of inflation-adjusted earnings, increased 0.4% in August from a month earlier." That is a fairly strong number, and may be hinting at future higher inflation, as long as the U.S. economy stays strong.

I'd say, however, that core inflation at 2.4% (even though the Fed favors a different inflation indicator) would argue against the 50-basis-point cut this month being pushed by many in Washington and on Wall Street. The president tweeted yesterday "No Inflation!" but clearly, U.S. inflation is rising moderately.

A 25-basis-point cut is a lot more likely, and anything higher would set off alarm bells.