The great financial crisis really hit the REIT market with a perfect storm. The housing market crashed, banks stopped working, and suddenly refinancing debt became much more difficult or even impossible in many cases. REITs were forced to cut dividends not necessary because of operational issues, but because they needed liquidity to deal with maturating debt and other uncertainty.

Dividend cuts, combined with a housing crash and troubled banks, led to massive volatility across the REIT sector and it continues to negatively affect the sentiment of REITs to this day.

With recession fears starting to spike again, we have heard a few market pundits recommend staying out of REITs altogether.

We believe that this is very short-sighted. These investors still see nightmares of 2008-2009 which led to the sharpest real estate crash of mankind. In reality, this was a rather exceptional event that is unlikely to repeat itself in the future. Each recession is different, and REITs have fared way better than regular stocks during most recessions. Researchers from Cohen & Steers (CNS) note that:

"REITs have outperformed the S&P 500 by more than 7% annually in late-cycle periods since 1991 and have offered meaningful downside protection in recessions, underscoring the potential value of defensive, lease-based revenues and high dividend yields in an environment of heightened uncertainty." 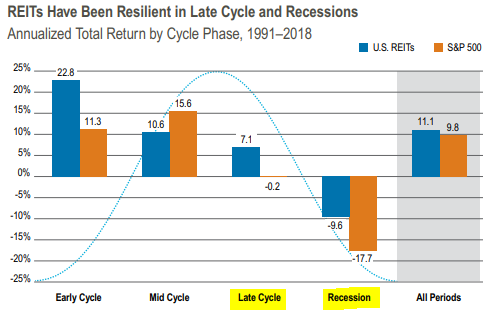 In other words, REITs perform exceptionally well in a late cycle as economic growth slows down and interest rates start decreasing. This makes perfect sense since REITs are income-driven investments with only moderate growth.

Secondly, REITs have less downside in a recession because cuts in interest rates push yield-starved investors towards REITs - which continue to generate high income from long-term leases. Again, this makes perfect sense.

Put simply, REITs are exactly where you want to be in a late cycle economy according to this study. They won't save you from a bear market, but they can add resilience, income and diversity to your portfolio.

This is especially true today because:

REITs have steadily fortified their balance sheets since the great financial crisis, leaving the industry in a financial position it has ever seen before. The leverage levels are conservative today with the average debt-to-assets at just ~35%, which compares very favorably to most private equity real estate investors who often use up to 70% debt to finance deals. 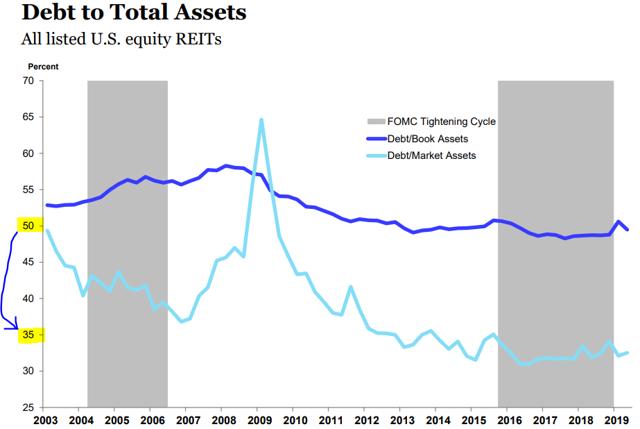 Moreover, most of this debt is fixed rate and has long maturities. The average debt maturity for REITs is at nearly 80 months today, which is over six years. Maturities are well-staggered and refinancing risk is much lower today. Interest coverage ratios are also at all-time highs: 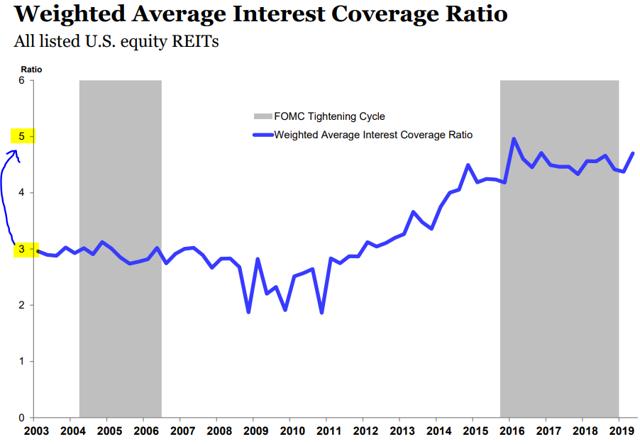 These are very significant improvements that will make REITs even more resilient to recessions in the future. So far, REITs outperformed during recessions… and this could make the outperformance even greater in the future.

While balance sheets are stronger than ever before, NAREIT notes that REITs are achieving fast growth today with increasing rents and occupancies.

"Current operating performance for the REIT industry is right in its 'sweet spot': over the last four quarters, same-property NOI growth averaged 3.2 percent, consistent with the industry's long-term norm. Same property NOI growth greater than about 4 percent can be "too much of a good thing," stimulating so much new construction that it results in oversupply that reduces occupancy rates and rents, eventually suppressing same-property NOI growth to its "soft" range of 2.5 percent or less." 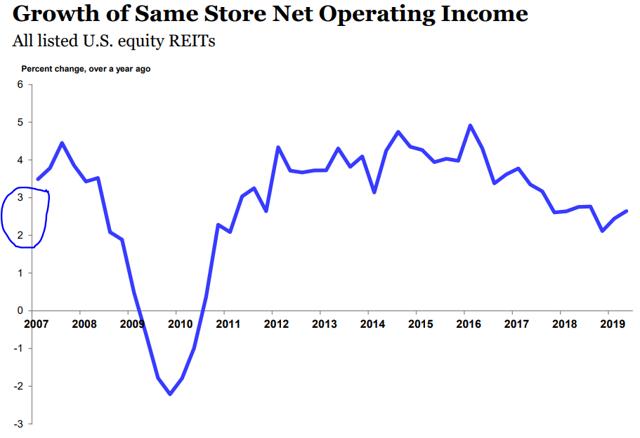 NOI growth is right around 2-3% for most property sector - a very healthy level. Occupancy rates are also today at historically high levels: 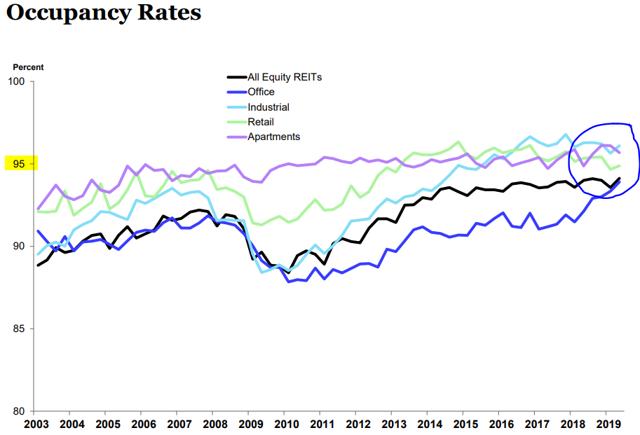 This tells you two things. First off, markets are in balance and there is no oversupply. This favors the landlord as leasing space is relatively easy and tenants have little other options. Secondly, because of all that, properties that are in high demand can increase their rents. When occupancy rates are nearing 100%, rents get hiked. Therefore, we expect NOI growth to remain healthy going forward.

Finally, REITs benefit today from good access to capital at historically cheap cost and have low payout ratios of around 70% on average (based on cash flow). Therefore, they are able to expand portfolios with new acquisitions.

When you combine 2-3% NOI growth with some leverage and external growth, REITs can realistically reach >5% annual FFO growth.

Today's market environment can be summarized with three bullet points:

REITs are favored by all three favors in comparison to the broader stock market.

With growth slowing down and declining interest rates, investors are becoming increasingly interested in more defensive stocks with consistent income. As a result of these themes, REITs went from:

"Avoid at all cost due to rising interest rates." 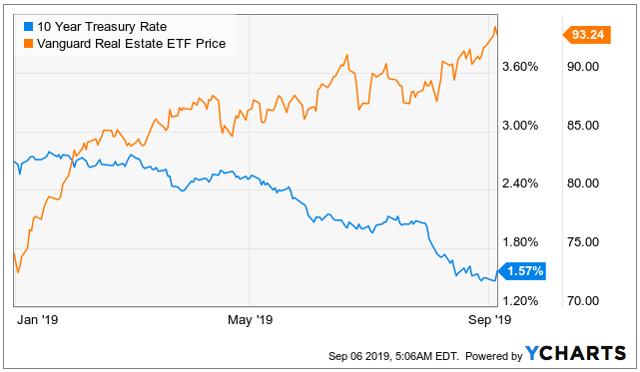 Moreover, the trade war is adding fuel to the fire with increased risk. Volatility is likely to remain sky-high and investors could be in for a poor surprise as tariffs start to show their impact on the economy.

A much more favorable market segment to protect yourself from the trade war is REITs. They are natural hedges against the trade war because real estate is a Local Man's Game. Unlike large US companies which generate today close to half of their revenue from outside the United States, real estate investments are very local with no "direct" exposure to trade wars. A US REIT renting space to a tenant within the US is paid in US dollar and is not directly affected by trade disputes. It is protected by long-term leases.

In a world where bonds pay close to nothing and stocks trade at historically expensive multiples - REITs continue to offer much better margin of safety.

Unlike stocks which saw their P/E ratio expand drastically during the past bull market, REITs have seen their P/FFO ratio stagnate at right around 17x FFO: 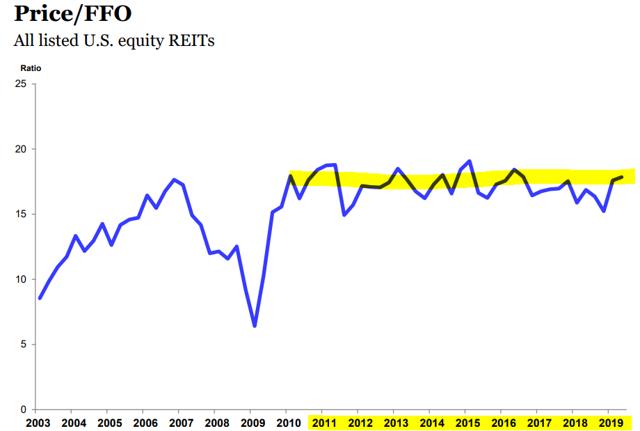 Paying 17x FFO for more resilient earnings is a better proposal than paying 22x earnings in the case of the S&P 500 (SPY) if you ask me.

Moreover, the current yield spread of REITs relative to the 10-year Treasury is historically high, suggesting that REIT valuations remain on the low side relative to interest rates: 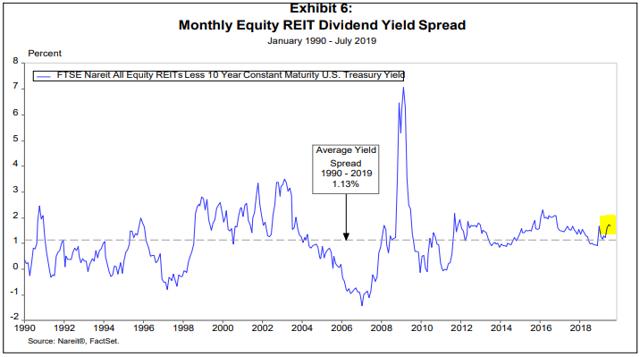 Many market pundits look at popular market-favorite large-cap REITs such as Realty Income (O), Prologis (PLD) and quickly conclude that REITs are overpriced. The reality is very different when you look into smaller and lesser-known REITs.

The difference in small-cap vs. large-cap REIT valuations has rarely been as large as today.

This is where we invest today for resilient income in this late cycle economy.

Our Core Portfolio has a dividend yield of 7.75% with a 69% payout ratio despite a yield that's almost double the REIT indexes. Beyond the dividends, the core holdings are trading substantially below intrinsic value at just 9.5x FFO, providing both margin of safety and capital appreciation potential:

Do we know whether REITs will be higher six months from now? No. But we do believe that a portfolio of undervalued REITs is very attractive in a late cycle economy.

Today, REITs enjoy their strongest balance sheets ever in their history, healthy fundamentals, and trade at earnings multiple discounts to broader stocks. Therefore, we would expect REITs to outperform stocks in today's late cycle economy, and even more so as the cycle finally turns.

Thank you for reading! If you liked this article, please scroll up and click "Follow" next to my name to receive future updates.

We started our Biggest Sale of the Year on Friday- offering 50 spots at a $300 discount. In just a few days, all the spots were SOLD OUT!

If you missed the sale... Today is your lucky day! Due to popular demand, we are extending the Sale until we break the 1000-member mark. Only 4 spots left!

Start your 2-week free trial TODAY and lock-in this $300 discount!