Editor's note: Seeking Alpha is proud to welcome Joaquin Grech as a new contributor. It's easy to become a Seeking Alpha contributor and earn money for your best investment ideas. Active contributors also get free access to SA Essential. Click here to find out more »

After falling more than 57% since its peak of 2018, YY Inc. (NASDAQ:YY) is considerably undervalued. The acquisition of BIGO has created a temporary distortion on earnings that is provoking the market to heavily discount YY’s potential. The company is growing its monthly active users and revenues at double-digit rates and I expect earnings to be back on track by 2020.

YY Inc. is the leading live streaming social network in China. Its mission is to connect people and enrich their lives through video. Co-founded in 2005 by David Li and Lei Jun, it has grown into an international powerhouse with over 1 billion registered users. YY offers multiple apps for live streaming, gaming, eSports, dating, education, and short video content sharing. Since 2018, YY has focused on an international expansion that has had a negative effect on its share price. I believe that the negative impact has merit but it is highly overdone.

Why is YY on a downtrend?

If you look back at February 2018, you would think that YY Inc. could do no wrong. Its share price was hovering over $130, revenues were growing at an impressive 48% and earnings per share were at a record high at over $6.2.

Fast forward to 2019 and EPS is expected to be half at $3. The share price has been decimated briefly hitting $51 in August before bouncing back to $57. There are two main reasons:

YY gave away HUYA right before its IPO

At the beginning of 2018, YY decided to sell a 34.6% stake of HUYA (HUYA) to Tencent (OTCPK:TCEHY) for $462 million. Two months later, HUYA went public and that 34.6% stake was worth over $1.5 billion. To make matters worse, Tencent has the right to acquire up to 50.1% of the voting rights between the second and third anniversary of the first purchase. Considering that HUYA has grown revenues by an incredible 94% YoY and that it’s expected to keep growing at 30% to 35% annually, it’s hard to argue that Tencent didn’t get an excellent deal (to the detriment of YY).

In March 2019, YY completed the acquisition of BIGO. The second quarter was the first time we had a view of the consolidated financial statements and things did not look pretty. The $1.5 billion purchase was paid in cash and stock, increasing the share count from 65 to 81 million. The issuing of convertible bonds for over $1 billion did not bode well for shareholders either. If share dilution was not problematic enough, the financial statements revealed operating margins went downhill from 23% in 2017 to about 1.1% in the second quarter of 2019. The added cost of BIGO's operation and integration had a huge negative impact on earnings with most analysts now projecting $3.00-$3.50 EPS for 2019. Unsurprisingly, the share price adjusted accordingly.

Where do we go from here?

Now that we understand why the share price has collapsed, we need to figure out whether this is a falling knife or an opportunity. So let’s begin. BIGO's purchase and HUYA's sale are one-time items. A car manufacturer would have a big expense recorded for a new factory, but we wouldn’t know whether it was a good investment until the factory is operational and sales are coming in. Similarly, BIGO was a big expense recorded due to YY’s international ambitions, and we shall find out shortly whether it was worth it.

Why is BIGO so important to the future of YY? Until recently, YY was dominant in China and only in China. It had practically no international presence. David Li envisioned that to continue YY’s growth, it had to expand internationally. That’s how BIGO's purchase came to be. YY group has over 433 million MAU (Monthly Active Users). 94.8 million are based in China and 338.7 million are overseas. That’s 22% and 78% respectively. This diversification came single-handled with the purchase of BIGO. 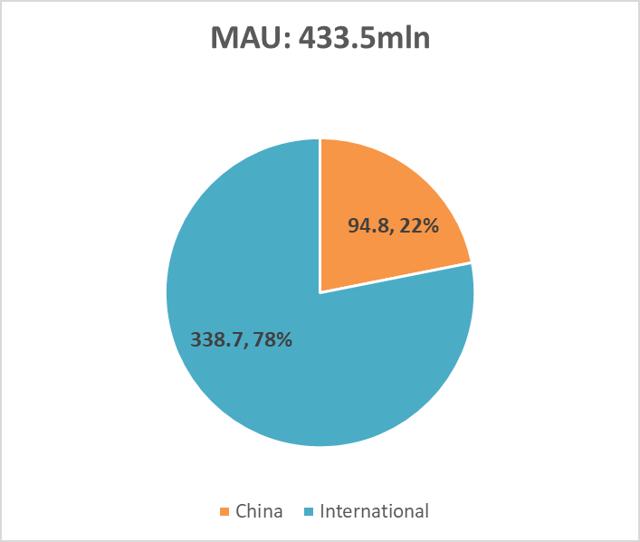 Source: Created by the author using data from YY Inc. 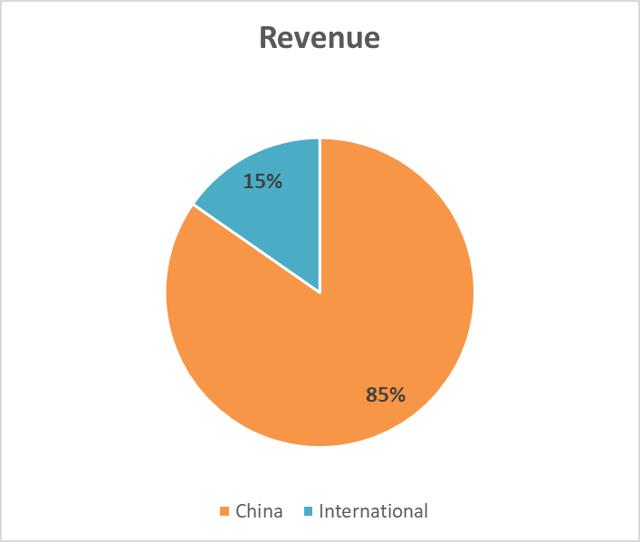 Source: Created by the author using data from YY Inc.

Perhaps, most shockingly is that more than 80% of the revenues are coming from China while less than 20% is contributed from overseas. Think about this: Less than one-fourth of the monthly active users contribute over 80% of the total revenues. Although BIGO has multiplied the MAU by four, it still remains a largely untapped (demonetized) user base. It is as if we’ve just built the new car factory and now it’s time to turn it on and see the results.

What do we know so far?

David Li talked extensively about BIGO and especially about one of its apps: IMO. IMO is a video conference app that allows you to video/voice/text chat not only with your contacts but with random strangers. YY has begun merging different video services into IMO. The results are compelling: IMO has over 500 million downloads and 200 million monthly active users. Growing at double digits and with no signs of slowing down. David Li also announced that YY aims to grow revenues by 11% to 14% for Q3 2019. Since HUYA is publicly listed, we know that it also announced an 11%-14% growth expectation. Per my calculations, for YY as a group to grow 11% in three months, it would require for BIGO to grow revenues by 28% in only three months. Therefore, if we thought HUYA’s revenue was growing fast, BIGO’s expected grow is at more than double that rate.

My calculations reveal that Q3 2019 should generate 6570 million RMB, or $957 million. International revenue share would move upward from the current 15% to over 22% of the total YY’s revenues. If history is any help and if we project the same growth rates for Q4 2019, it would mean that YY will see over 60% revenue growth in 2019. That’s a staggering $3.7 billion. Most of this growth would come from its international expansion (read: its BIGO acquisition). David Li also announced his intention to return to 20%-24% operating margins and a $300 million share repurchase program for the next 12 months. After modifying my calculations with this information, I proceeded to modify the growth estimates for 2020-2023 based on the expectations for video streaming growth rate worldwide.

What about the risks?

Obviously, things are never that easy. We can’t just sit and relax waiting for our current $57 share price to skyrocket to over $200 in a few years. The first thing we need to monitor quarter to quarter is whether YY is, in fact, able to keep growing revenues and earnings at the expected rate. For revenues that’s over 60% for 2019 and nearly 15% annually until 2023. In addition, a few risks that would derail my investment thesis:

I expect YY to continue growing its monthly active users and international revenues at a double-digit rate for the foreseeable future. Based on the company’s public information and my own projections, I believe YY could be valued at $200-$250 per share by the end of 2023. Nevertheless, once a local company takes the jump internationally, the complexities and risks grow accordingly. You should monitor your investment thesis monthly to see that it matches expectations and YY doesn’t deviate from its goals.

Joaquin Grech
126 Followers
Value Investor. I believe there is no distinction between Value and Growth.Investing since 1998, I've lived through three major market crashes. Studied at Columbia and NYU and currently living in Panamá.

Disclosure: I am/we are long YY. I wrote this article myself, and it expresses my own opinions. I am not receiving compensation for it (other than from Seeking Alpha). I have no business relationship with any company whose stock is mentioned in this article.