Beyond Meat’s IPO on May 2 was one of the most anticipated IPOs so far this year. Since going public, Beyond Meat shares (NASDAQ:BYND) have gained a staggering 137%. This performance can be directly attributed to the attractive prospects of the clean meat industry. There are a few tailwinds behind the clean meat industry in the U.S., and other major regions including Australia are picking up the trend. One such tailwind is the exponential growth of the global population. The World Bank expects the global population to reach 11.2 billion in 2100, growing at a steady rate from the current population of 7.4 billion people. It is questionable how the demand for meat can be met for such a large addition of population globally. The growing environmental, health and ethical concerns are also proving to be a tailwind for plant-based meat manufacturers including Beyond Meat.

Despite the attractive prospects of the clean meat industry and the plant-based meat industry, Beyond Meat is still trying to break through to profitability and the current valuation does not reflect the true and fair state of the company. What is more noticeable is the volatility of BYND shares. I believe the time is not right to invest in BYND shares, but an earnings beat in the next quarter could momentarily pop the share price up as well, the same way it did when the company reported Q2 earnings. The significant volatility of BYND shares creates opportunities for options traders.

Beyond Meat develops a portfolio of plant-based meat items. At present, the company has successfully developed 3 core plant-based meat production platforms including beef, pork, and poultry. The flagship product of the company is the Beyond Burger, which gained widespread media attention leading up to its IPO. This burger is designed and developed to look, taste, and feel like a traditional burger. Other products of the company include Beyond Sausage and Beyond Chicken.

The core business strategy of the company is to use its proprietary technology and processes to replicate meat products, using plant-based components.

The growth story of Beyond Meat is reliant on the favorable macro-economic developments. In 2017, the global meat processing market was estimated to be worth $714 billion and was expected to grow at a CAGR of 14% through 2022. However, the plant-based meat industry is still in its infant stage. In 2019, the plat-based meat industry was valued at $12.1 billion and is projected to grow at a CAGR of 15% through 2025. As one of the first entrants to this industry, Beyond Meat is in a strong position to leverage its market-leading position and popularity to capture a significant chunk of this growth opportunity. However, as the industry prospects brighten, large-scale meat processors might eye the plant-based meat manufacturing subsector to drive their earnings growth. This will heat the competition in the industry and Beyond Meat needs to continue innovating its product line up to stay relevant.

As the production costs decline, alternative meat products will have a strong platform to become mainstream products. This is a growth opportunity that Beyond Meat is trying to tap and the future success of the firm will depend on its ability to lower its production costs to improve margins.

The increase in revenues came on the back of new partnerships which helped the company penetrate new markets. Even though there are ample growth opportunities available in the U.S., it’s important to establish the company’s presence outside the U.S. as well, especially considering the increased competition expected in the future. 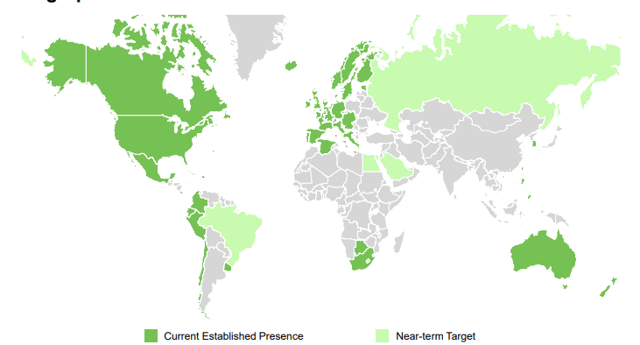 As illustrated above, Beyond Meat has already penetrated important regions including Australia, Europe, and some parts of South America. Also, the company targets to expand into Central and South Asia regions as the population in these regions is expected to grow rapidly and the rise of a middle-income society in these regions provides a robust growth opportunity for the firm.

As investing is not only about identifying good companies but about investing in such companies at a fair price at best, Beyond Meat is not an attractive investment at present. Shares of Beyond Meat are trading at price-to-sales of 56 and price-to-forward earnings of 1,000. Both these ratios indicate that the shares of Beyond Beat have already incorporated years of future growth.

Even though the company has a promising future, Beyond Meat shares are not an attractive investment. To justify the current valuation multiples, Beyond Meat should grow at double- or triple-digit growth rates for decades. There are instances when good companies do not translate into good investments. Beyond Meat, shares fall into this category. Shares are significantly overvalued.

The scope of this article is not to exploit prevailing options strategies, but to discuss the investment case for Beyond Meat. However, it’s evident that the significant volatility in Beyond Meat shares is something that options traders can use to their advantage.

The below table by Sleek Options reveals several instances in the recent past where the options prices have displayed drastic volatility.

Options traders might want to consider using a long straddle to benefit from the expected volatility of Beyond Meat shares when its Q3 earnings are released, on November 4.

The macro-economic outlook for Beyond Meat is favorable. The projected growth of the plant-based meat industry will provide ample growth opportunities for Beyond Meat. However, the competition in the industry will increase in the future as renowned names in the food processing industry notice the growth opportunities available in the plant-based meat space. Even though Beyond Meat operates in a growing industry, shares are significantly overvalued. It’s difficult to justify Beyond Meat shares trading at these multiples, even if earnings were to grow at double-digit rates for a long time. Options traders can exploit a few trading opportunities with the high volatility of Beyond Meat shares.

I am an investment analyst with 7 years of experience in financial markets. I specialize in U.S. equities and incorporate a top-down approach to identify developing macro-level trends and the companies that would benefit from such trends. I am a strong believer that the best investment opportunities could be found in under-covered equities. Please click the "Follow" button to get timely updates on new articles.

I am the founder of Leads From Gurus, a Marketplace service on Seeking Alpha that focuses on uncovering alpha-generating opportunities.

I'm a CFA level 3 candidate, an Associate Member of the Chartered Institute for Securities and Investment (CISI, UK), and a candidate in the Chartered Wealth Manager program.

During my free time, I enjoy reading.