It was just last week when I had an article published previewing a potential upcoming dividend raise for technology giant Microsoft (NASDAQ:MSFT). Since the company had a history of boosting its quarterly payout in September, I figured it was just a matter of time before we got some news. On Wednesday afternoon, the company's board delivered in a big way, announcing two items that shareholders will definitely appreciate.

First detailed in this press release was the news regarding the dividend, which was increased by 5 cents per share a quarter. The new payout will be $0.51 a year, or $2.04 per year and is payable Dec. 12, 2019, to shareholders of record on Nov. 21, 2019. The ex-dividend date will be Nov. 20, 2019. In the chart below, you can see the company's recent dividend history with the "2019" value being represented by the new payout amount. 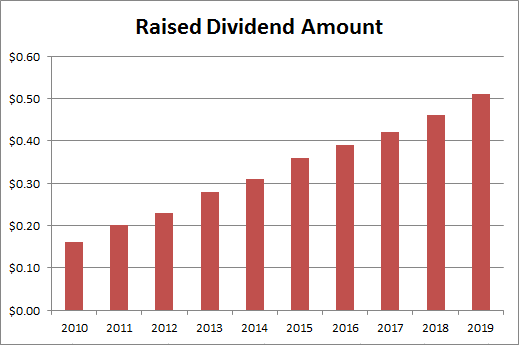 It turns out that the new payout is exactly the middle of the range of what I predicted and represents an increase of just under 10.9% from the previous amount. This was the largest raise in terms of both cents and well as percentage in the past four years. Since 2010, the dividend has more than tripled from its $0.16 value, meaning, over that span, investors have seen compounded growth of roughly 13.75% a year.

The second part of Wednesday's press release was that the board announced a new share repurchase plan of up to $40 billion. Like previous plans, there is no expiration date on this buyback, so it could happen over a couple years or many, depending on market factors. As of the end of the June quarter, there was still $11.4 billion left on the previous plan, so I guess we'll have to wait for the next 10-Q filing or further clarification to see if this is new buyback authorization replaces the old one or is additional to it. As a point of reference, the company has spent roughly $42 billion on share repurchases during the past three fiscal years.

As I mentioned in my previous article, this strong capital return plan is being fueled by double-digit revenue and earnings growth, expected to continue for a couple of years. In the twelve-month period ending this June, free cash flow was more than $38 billion, up about $6 billion over the prior-year period. The company has a very strong balance sheet and larger profits moving forward should help cash flows even more.

It certainly will be interesting to see how quickly management decides to spend that newfound repurchase authorization. While the average analyst target is still another 10% above current levels, the stock has been one of the best in the market in recent years as seen below. Shares in Wednesday's after-hours session topped $140, putting them just a dollar or so from an all-time high. This stock hasn't had many major pullbacks lately, but will management try to wait for one before really stepping in?

In the end, investors in Microsoft should be more than pleased with the news out on Wednesday afternoon. The company boosted its quarterly dividend by 5 cents as I figured it would, giving it a new yield of about 1.45% in after-hours trading. That might not seem like much, but in this low rate environment, when combined with a solid buyback, it provides a nice capital return plan. With the company already growing revenues and earnings nicely, this news might send shares to a new all-time high.

Bill Maurer
32.72K Followers
I am a market enthusiast and part-time trader. I started writing for Seeking Alpha in 2011, and it has been a tremendous opportunity and learning experience. I have been interested in the markets since elementary school, and hope to pursue a career in the investment management industry. I have been active in the markets for several years, and am primarily focused on long/short equities. I hold a Bachelor of Science Degree from Lehigh University, where I double majored in Finance and Accounting, with a minor in History. My major track focused on Investments and Financial Analysis. While at Lehigh, I was the Head Portfolio Manager of the Investment Management Group, a student group that manages three portfolios, one long/short and two long only. I have had two internships, one a summer internship at a large bank, and another helping to manage the Lehigh University Endowment for nearly a year. Disclaimer: Bill reminds investors to always do their own due diligence on any investment, and to consult their own financial adviser or representative when necessary. Any material provided is intended as general information only, and should not be considered or relied upon as a formal investment recommendation.
Follow