This article was selected to be shared with PRO+ Income subscribers - find out more here.

Aroundtown (OTCPK:AANNF) has been neglected on Seeking Alpha, but it is a very interesting company within the European real estate sector. Its valuation seems to be undemanding considering Aroundtown's sound fundamentals and the potential merger with its competitor TLG may be a catalyst to unlock value in the coming months.

Aroundtown is a German real estate company established in 2004, focused on the office market. The company invests primarily in income generating properties, on central locations in top tier European cities. Geographically, it invests mainly in its home market and the Netherlands.

It has a market capitalization of about $9.4 billion, being a mid-size company within the European real estate market. Aroundtown trades in the U.S. on the over-the-counter market, but investors should note that Aroundtown's shares have much more liquidity in its main listing in Frankfurt and this is the best venue to buy shares of this company.

Aroundtown invests directly in commercial real estate, which represents the vast majority of its investment portfolio, and indirectly in the German residential market through its equity stake of 39% in Grand City Properties (OTCPK:GRDDY). Within commercial assets, office is the largest asset type representing 56% of the total value, while hotels account for about 28%.

The company's business model is to buy and manage a portfolio of cash generating properties, with upside potential in rents or occupancy increase which should drive to higher property values in the medium-term.

Its current portfolio is well diversified across Germany, with the largest location (Berlin) having a weight of 20% in the portfolio, followed by Munich (13%) and Frankfurt (11%). In international markets, the company has some assets in the Netherlands and in London, but the combined weight in the portfolio is only about 12% of its total assets.

Its property portfolio has a defensive profile given that it has a large tenant base, with the top 10 tenants representing less than 20% of the company's total rent. This means that the company is not too much exposed to a few number of clients and the long-term nature of lease terms also make its revenues and cash flows quite stable over the economic cycle. At the end of June, Aroundtown's weighted-average lease term was around 8 years, which gives significant visibility over the company's business prospects in the medium-term.

Aroundtown has a very good growth history in recent years, driven by its strategy of pursuing accretive acquisitions and organic value creation. Its investment property portfolio was valued at about €14.8 billion at the end of March 2019, compared to some €5 billion ($5.5 billion) in 2016. This represents an impressive annual growth rate of 62%, which was possible through acquisitions, amounting to more than €8 billion ($8.8 billion) during this period. 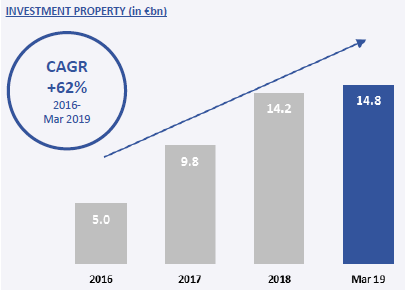 Reflecting its growing asset base, Aroundtown's earnings and cash flows also increased rapidly over the past few years, with its free funds from operation (FFO) more than doubling from 2016 to 2018, growing at about 53% annually during this period. 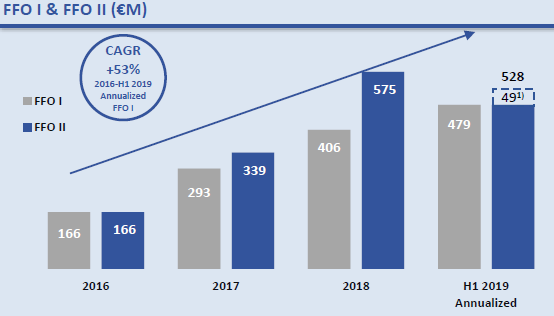 Going forward, Aroundtown should continue to grow its business supported by a strong economic backdrop in Germany and the company's strategy of pursuing accretive acquisitions. As the commercial real estate market is highly fragmented, there should be several growth opportunities in the long-term for large players like Aroundtown.

Additionally, its stake in Grand City Properties also enables it to benefit from the tight situation in the residential market, being another growth source for the company that should not be neglected in the coming years.

Regarding its financial performance, Aroundtown has a very impressive track record due to its acquisition strategy that has led to very strong revenue, earnings and cash flow growth over the past few years.

In 2018, Aroundtown maintained a very positive trend, with very strong growth figures compared to the previous year. Indeed, net rental income was up by 48% year-on-year (yoy) to €614 million ($675 million), adjusted EBITDA increased by 41% yoy and FFO was up by 38% yoy. This is explained by the company's acquisitions during the year, thus it is also important to look at like-for-like growth, which was also strong with a rental income increase of 4.8% yoy.

Aroundtown's bottom-line increased by 19% yoy, a smaller growth rate than EBITDA due to higher interest expenses and taxes, while earnings per share was up by 10% because the company performed a capital increase during the year which led to a higher number of shares outstanding. Its net asset value (NAV) increased to more than €10 billion ($11 billion), maintaining the strong growth trajectory of previous years. 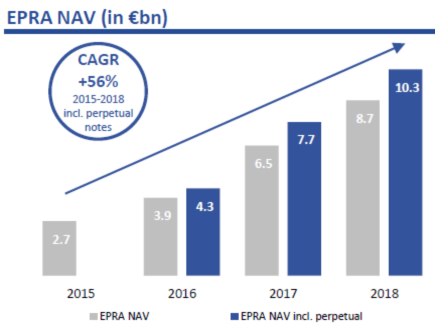 During the first six months of 2019, Aroundtown reported double-digit growth rates for most of its key performance indicators with net rental income up 23% yoy, adjusted EBITDA +30% yoy and FFO 26% higher than in the same period of 2018. NAV was higher by 21% to €12.5 billion ($13.8 billion), showing that Aroundtown's growth strategy doesn't show any signs of slowdown.

Regarding its balance sheet, the company has a conservative financial profile measured by the loan-to-value (LTV) ratio, a key leverage indicator in the real estate industry. At the end of June, Aroundtown's LTV ratio was 36%, which is a relatively low level compared to other European real estate companies.

This strong financial position and the company's good cash flow generation are two important factors for a sustainable dividend distribution over the long-term, making Aroundtown an interesting income play within the European real estate sector.

Its dividend policy is to distribute some 65% of FFO to shareholders, being therefore its distributions linked to cash generation rather than accounting profits. This should lead to a sustainable and safe dividend over the long haul, given that accounting earnings can be volatile due to capital gains and property revaluations and therefore FFO is a better metric to evaluate the company's distribution capacity. 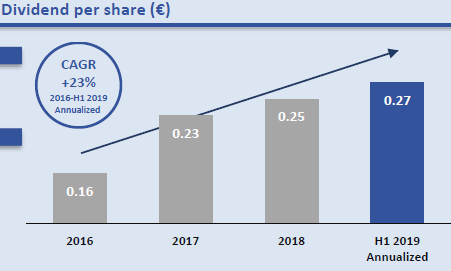 At its current share price, Aroundtown offers a dividend yield of about 3.70%, which is attractive within the European real estate sector. However, investors should be aware that the company only makes one dividend payment per year (usually in June), reducing a little bit its income appeal.

Going forward, Aroundtown's dividend should continue to grow in-line with FFO growth, as the dividend policy is not expected to change in the near-term. Based on the company's guidance for 2019, FFO is expected to be about €0.41 ($0.45) per share, thus its dividend should increase to around €0.27 ($0.30) per share representing an increase of 7% compared to the last dividend paid.

TLG is a German real estate company also focused on the office market and the acquisition of this stake plus options to further increase it, led to friendly talks of a potential merger between the two companies.

This potential merger would create the largest European office and hotel real estate company with combined assets of about €25 billion ($27.5 billion). The two companies have a similar business model and portfolio strategy, thus significant synergies can be achieved both in terms of revenues and costs, such as administrative and operational efficiencies and financing savings, making this merger potentially beneficial for shareholders of both companies.

Therefore, a merger between Aroundtown and TLG seems to be very likely in the next few months, given that TLG is now seeking representation in Aroundtown's board of directors and the exercise of its call option is expected until the end of February, 2020. The merger terms are expected to be announced thereafter and the merger may be completed by mid-2020 if approved by shareholders of both companies.

Taking into account that a potential merger is friendly, a share swap deal is more likely than a cash offer, and most likely at a value closer to the company's reported NAV. Given that both companies are trading at a significant discount to NAV, this potential merger can be made at a premium to current share prices of Aroundtown and TLG.

Aroundtown is the leading listed commercial real estate company in Germany, has a good growth history and its business prospects remain quite attractive due to a supportive economic backdrop in Germany and its acquisition strategy.

However, despite these strong fundamentals, Aroundtown is trading quite cheap considering that it is trading at only 0.76x NAV, compared to about 0.85x NAV for its European commercial real estate peers.

It also offers a growing dividend and an attractive yield, making it a good play both from an income and value perspective. Moreover, the potential merger with its competitor TLG may be a catalyst to unlock value, if done at a premium compared to its current share price.

Labutes IR
2.06K Followers
Labutes IR is an Fund Manager specialized in the financial sector, with more than 15 years' of experience in the financial markets. Under my coverage is mainly the Financial sector, including Banks, Insurance, Real Estate and FinTechs both in the European and U.S. markets. For my personal investments I also invest in 'Income' stocks, as I'm building a portfolio for retirement, with the goal of being able to retire in 20 years.