Quotient Limited (NASDAQ:QTNT) is an established, commercial-stage transfusion diagnostics company with operations based in Switzerland, Scotland, and Pennsylvania. As of 2018, the company had 72 CE marked and 63 FDA licensed reagents, which generate a steady revenue stream for QTNT. However, its biggest potential lies in developing a unified platform called the MosaiQ, which combines 3 types of diagnostics - currently offered individually by competing companies - into one platform. This platform is in development in various stages, but once it is ready, it may have a disruptive effect on the transfusion diagnostics market.

Armed with over 30 years of research experience from the manufacture and commercialization of conventional reagents, Quotient developed innovative tests for Immunohematology (IH) (or blood grouping) and serological disease screening (SDS) on a patented, proprietary, diagnostics platform named MosaiQ. In addition to IH and SDS, MosaiQ is being developed further for molecular disease screening (MDS), including nucleic acid testing (NAT) (DNA and RNA). This comprehensive platform has the potential to significantly reduce costs in the donor and patient IH, SDS, and MDS (collectively termed blood transfusion diagnostics) environments. 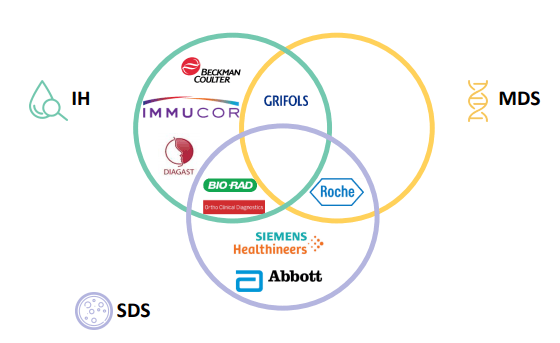 The market is highly fragmented and no player covers all three segments - IH, SDS, and MDS. According to Quotient, MosaiQ is a next-generation platform "designed to deliver fast, comprehensive antigen typing, antibody detection, and disease screening results, using a single low volume sample in a high throughput automated format." MosaiQ is geared to drastically reduce labor costs and complexity in existing diagnostics practices.

Quotient's MosaiQ initial IH microarray received European regulatory approval on April 30, 2019, about seven months after filing in late September 2018. Following the CE mark, the company launched the first "hypercare" European commercialization campaign with a group of nine selected customers in July 2019. Field trials of the expanded IH microarray will be initiated in Europe and the U.S. in 2H-2019. Filing for both European and U.S. regulatory approval of expanded IH microarray is expected in 1Q-2020.

Filing for European regulatory approval of the initial SDS microarray was submitted in June 2019. Field trials for the same in the U.S. are ongoing and filing submission to the FDA is expected in November 2019. Quotient expects to commence field trials for the expanded SDS microarray in both Europe and the U.S. in 1Q-2020, and file for both CE marking and FDA approval in late 2Q-2020.

Feasibility studies for the MDS microarray are ongoing, and field trials are expected to commence in early 2021.

Field trials of the MosaiQ initial SDS microarray for the detection of CMV and Syphilis achieved the required clinical performance. The data were obtained from donor centers' testing laboratories "using microarrays manufactured in Quotient's ISO audited manufacturing facility and run on the CE marked MosaiQ instrument." The field trial tested over 4,600 samples for CMV and for Syphilis.

In the field trials of the expanded IH microarray, concordance data were achieved in sample sizes of between 120 to 280.

Quotient also compared MosaiQ with other diagnostic systems with throughput and footprint based on publicly available data and targeted MosaiQ performance.

MosaiQ shows highest throughput and productivity per m² with the two diagnostics (IH + SDS) combined too against the best of the other systems combined.

(Source for all tables in the above trial data section except where stated: company presentation of March 2019 linked under pipeline).

What we see from the vast amount of data presented above is that MosaiQ performs exceedingly well compared to competitors in terms of throughput and productivity. What remains to be seen is if this small company can capture the market from its bigger competitors.

Quotient's fiscal year ends March 31. At the end of fiscal 2019, the company had $94.8 million in cash and other short-term investments, $121.9 million of long-term debt, and $7.5 million in a restricted cash reserve account. In May 2019, the company sold an additional $25 million of its 12% senior secured notes due 2024, yielding net proceeds of $22.6 million, a portion of which was used to increase the restricted cash reserve account. Quotient foresees capital expenditure between $5 million and $10 million and going forward, estimated cash burn is between $15 million and $18 million per quarter. The company expects total product sales of between $30 million and $31 million and an additional $1 million in milestone contingent payments in fiscal year ending March 2020. Further increase in revenue may be possible only by the end of next fiscal year ending March 2021 when the initial IH and SDS microarrays should start contributing revenue. If everything goes as planned and expected, the cash, reserves, and expected revenue should carry the company through at least seven quarters.

Quotient plans to equip blood donor testing laboratories with a single, comprehensive instrument platform that can be utilized for blood grouping (IH) as well as both SDS and MDS for the donated red blood cells and plasma. From an analysis of historical annual blood donations collected by the company's key target customers, the potential market for MosaiQ microarrays after regulatory clearances and approvals (for IH, SDS, and MDS) should exceed 100 million microarrays per annum, at an estimated revenue of not less than $8 per microarray.

As of March 31, 2019, Quotient had an accumulated deficit of $381.0 million. The company foresees operating losses at least until next fiscal i.e., March 2021. Quotient might have to raise additional funds, though not necessarily by diluting the stock, towards the end of fiscal 2021.

The present management team is composed of professionals who worked in top positions in the diagnostics divisions or subsidiaries of major companies like Siemens, Roche, J&J, Bayer, Intel, Ingersoll Rand, etc. before joining Quotient. The company's development activities gained momentum after Franz Walt joined in February 2018, subsequently becoming CEO in May 2018. The company is poised to capture the transfusion diagnostics market with its unique and comprehensive platform. We see an upside to the stock even from the present level of near 52 weeks high.

That means that when the catalyst comes that will make or break a stock, we've positioned ourselves for success. And we share that positioning and all the analysis behind it with our members.