MannKind (NASDAQ:MNKD) investors are in a period of time that is quite interesting and is new territory. The recapitalization is no longer fresh news, and the company has now drifted into a period where the equity seems to seek a direction without much to base the moves on. MannKind stock is not treading water per se, but will bounce around a bit depending on the news flow. Currently, we have flatter-than-desired Afrezza sales combined with a couple of anticipated events which are positive.

Afrezza scripts for the week ending September 17th were 703. The retail sales tally was $1.09 million, with an estimated net revenue of $499,000. Scripts were lower than my projection, as well as lower than the implied guidance tied to the covenants on the MidCap deal. 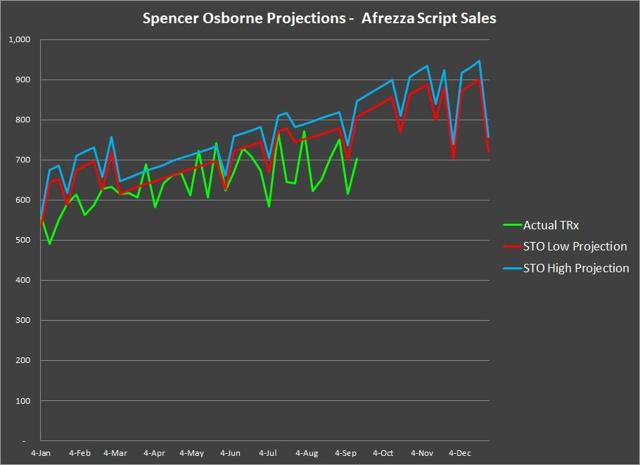 The good news is that the company has established a bit of a cushion related to the MidCap deal. The bad news is that the cushion will begin to evaporate quickly beginning in October. In my opinion, U.S. sales alone will not meet the covenants. This makes the pending launch in Brazil very important.

At stake for missing any covenant is the following:

In my opinion, a default by MannKind on the covenants would not see MidCap call the loan, nor would they take away the next tranche, which is valued at $10 million. I see MidCap as only increasing the loan rate, and perhaps establishing new covenants that attach another rate increase if missed. You can see why the pending launch in Brazil is very critical.

At this stage, I have MannKind ahead of the covenant by over $1 million, but the covenant requirements get steeper in October, November, and December. 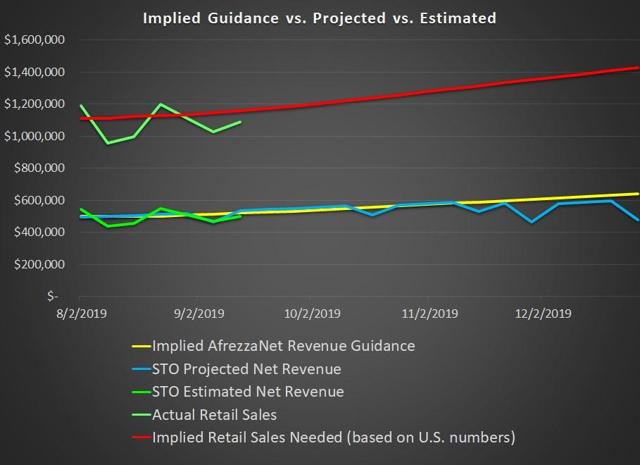 There is an irony with MannKind which cannot be ignored. Scripts carried a deep importance for active traders because it was the measure by which the equity moved. The irony is this: When MannKind finally put together enough cash to establish a runway and gather breathing room, the scripts should have taken on a lesser importance, but actually have not. The covenants ensure that for the next few months scripts remain front and center.

With regard to Afrezza scripts, there is a wild card in play - that wild card is the pending Brazil launch. What investors need to understand is that no matter what, there will be initial excitement attached to the launch there. We will see tweets, Instagram posts, Facebook posts, and every manner of people attaching a level of success to the launch. Savvy investors will pause while others go crazy. The first thing to grasp is that it will take a bit of time to determine whether the Brazil launch will follow a similar path to the U.S. or have a better trajectory. The second thing investors need to grasp is that what is really important at this juncture is whether or not the orders in Brazil are enough to generate the level of net revenue needed to take the MidCap covenants off of center stage.

I anticipate the launch to be in early October. It will be a binary event that will be positive for the stock price for a spell. Absent other news, the stock will settle into a range. But there is other news pending - a milestone payment from United Therapeutics (UTHR) relating to TreT.

From discussion with CEO Mike Castagna, obtaining the milestones related to TreT is in MannKind's control. MannKind had indicated in the past that it anticipated receipt of $25 million in milestones this year. The company has received the first $12.5 million payment, and a second was slated for the second half of the year.

Some investors may want MannKind to announce the milestone at a point of time which is right around the Brazil launch. That thought process may be short-sighted if you are a longer-term player in the equity. Here is why. The December $1.60 warrants are still 3 months from expiration. If the stock were to take a run above $1.60 this early, the natural play would be for the holder to short the stock with full knowledge that he can cover at $1.60. With this strategy, the warrant holder does not need to use his own money to realize a nice profit. The issue at hand is whether MannKind investors want to see the warrants exercised. On one hand, they would bring in $37 million in cash. On the other, they bring 11% dilution at a less-than-desirable share price. It may actually be best to stagger the news and tread water until warrant expiration. That would mean that 23.3 million shares come back into the fold, where the company can utilize them at higher prices just a few months from now.

So, here is where things sit. We know that a Brazil launch could happen any time in the next few weeks. In essence, that event is something MannKind cannot control. We know that MannKind should be close to receiving a $12.5 million milestone. This event is something which the company can control. The milestone issue is more complex. Traders want to see it announced ASAP, while longer-term thinkers may want to see the news downplayed in favor of getting much more money for those shares later on. After all, there is no immediate cash crunch. Lastly, we are likely 7 weeks or so away from knowing how much net revenue the Brazil shipment brought. If it not quite enough to remove the worry on the covenants, then it may be wise to save the milestone receipt to offset the news that the interest will rise by 2 points.

I know, I know... I likely just frustrated the heck out of many people. Savvy and active traders get upset because I display the playbook, and passionate longs get upset because I point out that things are not always simple and happy. Meanwhile, both sides of this equation now know the dynamics management must contemplate over the next several weeks. These concepts go deeper, but that discussion is for another time.

The bottom line is this: MannKind's cash situation is much improved from previous quarters. There is no cash crunch. Afrezza sales are still struggling, and will likely finish the year with U.S. net revenue at about $25 million. An early projection for 2020 shows continued slow growth and about $35 million in net revenue for U.S. sales. The MannKind story needs a new chapter. TreT is the beginning of a new chapter, but is at least 15 months away from bringing in sales royalties. I believe MannKind needs to put at least 2 molecules into Phase 1 clinical trials to maximize institutional investment opportunity.

This stock remains speculative. I was very bullish when this stock was down at a buck, and shifted to neutral in the $1.40s. I will tag this article as bullish on the binary event of the Brazil launch, which I see as an event that will cause the stock to make a run. Bear in mind that this stock could dip to $1.20 prior to that launch news. I will shift to neutral at any price above $1.45 because of the $1.60 warrants. Should the stock pass $1.60, I would be bullish up to $1.80 or so (or when volume dries up), because it would allow the short play typical of warrant holders to happen. Then, it's a ride back down until we see whether the warrants get exercised or the holders cover on the open market. True longer-term sentiment is being reserved for after the warrant issues are played out. There is a trade here if you are savvy. Stay tuned!

Spencer Osborne
4.13K Followers
Spencer Osborne assesses equities in a data supported realistic manner that is often missing in analysis that the average retail investor receives. His analysis is what investors NEED to hear rather than what they WANT to hear. He believes that the foundation of an equity price is based on what is probable rather than what is possible, and the trade focuses on possible near term catalysts and news. Smart investing is understanding how the market works and how that market mentality impacts a given equity. Spencer believes that investors should model their expectations and maintain a critical eye on whether those expectations are being met. If an invesor finds herself making excuses for missing the mark, then they are losing objectivity.
Follow