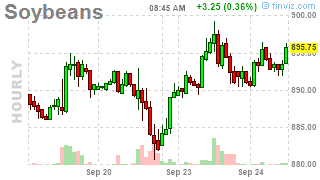 That's right, now Donald Trump claims he was "surprised" when Treasury Secretary Steve Mnuchin asked China's trade delegation to cancel a scheduled US Farm Tour. That was the cause of Friday's sell-off as the Chinese delegation packed up their toys and went home early and was taken as a sign that negotiations had broken down but now the Administration says that's not the case and that the Chinese were rushed home so they could buy our agricultural products rather than visiting the farms first.

For the Futures Impaired, we also had the following trade idea on the Soybean ETF (NYSEARCA:SOYB) that runs into November:

As to SOYB, it hasn't been this low since, well, ever - as the contract began in 2012 at $25 and never really went below $17.50 until the trade war began so $14.50 is quite a bargain and, as much as I hate to bet on Trump doing anything right, it's POSSIBLE we get a trade deal and that will hurt our hedges in the Short-Term Portfolio so, in order to hedge the hedges, a bullish bet on SOYB makes sense. For the STP, we can:

All this exciting bean trade has gotten the S&P all excited again and we're back over 3,000 - again - and we'll see if it sticks - again - but so far - it hasn't, though there is apparently no limit to how many times we can boost the S&P by saying the China deal is back on: 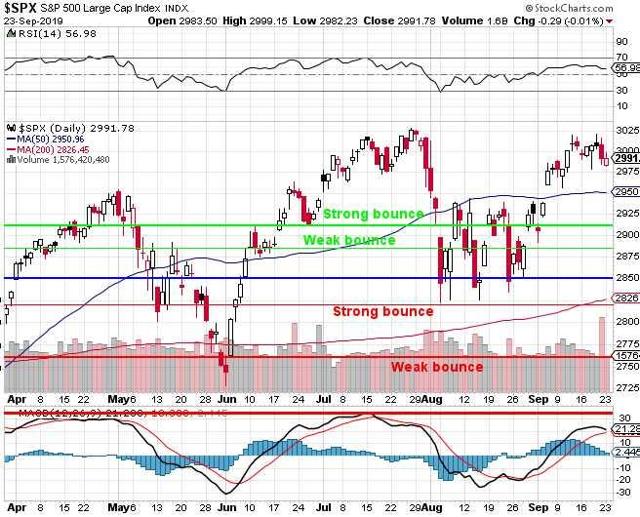 Coffee does have an ETF (JO) and, like SOYB above, we can pick up a spread that can give us a nice return. We think $100 (though it can dip below) is a good floor for Coffee as it's a point below which the farmers simply can't make money selling it. For the ETF, which is at $32.50, we can do the following spread:

There's always something fun to trade in the markets - even when you are on the sidelines!

Philip Davis
66.56K Followers
Philstockworld.com is the fastest growing stock and option newsletter on the Web. "High Finance for Real People - Fun and Profits" is our motto and our Basic and Premium Chat Sessions offer readers a chance to speak to Phil live during the trading day as well as authors like Optrader, Sabrient, Income Trader and Trend Trader - who send out Alerts during the market sessions and discuss trade ideas live with Members. We even have a new low-cost "Trend Watcher" Membership that lets readers view our chat sessions without directly participating a great solution for people who want to test-drive the site and profit from our experience! Trend Watchers get to view all of our Chat Archives, weekly Webinars - as well as the amazing PSW Wiki, which gives you Phil's recent opinions and trade ideas as well as technical and fundamental analysis of hundreds of stocks that we follow. Philip R. Davis is a founder of Phil's Stock World (www.philstockworld.com), a stock and options trading site that teaches the art of options trading to newcomers and devises advanced strategies for expert traders. Mr. Davis is a serial entrepreneur, having founded software company Accu-Title, a real estate title insurance software solution, and is also the President of the Delphi Consulting Corp., an M&A consulting firm that helps large and small companies obtain funding and close deals. He was also the founder of Accu-Search, a property data corporation that was sold to DataTrace in 2004 and Personality Plus, a precursor to eHarmony.com. Phil was a former editor of a UMass/Amherst humor magazine and it shows in his writing -- which is filled with colorful commentary along with very specific ideas on stock option purchases (Phil rarely holds actual stocks). Visit: Phil's Stock World (www.philstockworld.com)

Disclosure: I am/we are long SOYB, JO. I wrote this article myself, and it expresses my own opinions. I am not receiving compensation for it (other than from Seeking Alpha). I have no business relationship with any company whose stock is mentioned in this article.