In August, I argued that Dorman Products (NASDAQ:DORM) was just as much a buy at $70 as I believed it was at $80. I had initiated a position at $80 before the Q2-19 earnings report, but the company took a short-term hit on earnings due to higher-than-expected facility transition costs.

The facility costs are temporary. But the thesis for Dorman for the foreseeable future remains strong. In the last month, automotive aftermarket stocks in general have seen a strong surge, and Dorman has benefited. The stock dipped back below $70 after my August article came out, before shooting past $80 again this month.

I still believe Dorman is a buy at $80+ and would not be surprised to see the share price eclipse $100 within the next 12 months.

Guidance For The Second Half Of 2019

Dorman Products is a leading supplier of replacement parts and fasteners for passenger cars, light trucks, and heavy-duty trucks in the automotive aftermarket.

Like Q1, Dorman grew revenue by 7% in Q2. But Dorman revised full-year revenue guidance downward and believes it is on pace to grow revenue 7-9% for the year, compared to the 6-10% full-year revenue growth estimate the company had provided last quarter.

The biggest downward guidance revision, however, came on the earnings front. The earnings per share came in dramatically below expectations, and the company revised full-year EPS guidance down to $3.06-3.30, which is 25% below full-year expectations provided by the company at the beginning of the year. 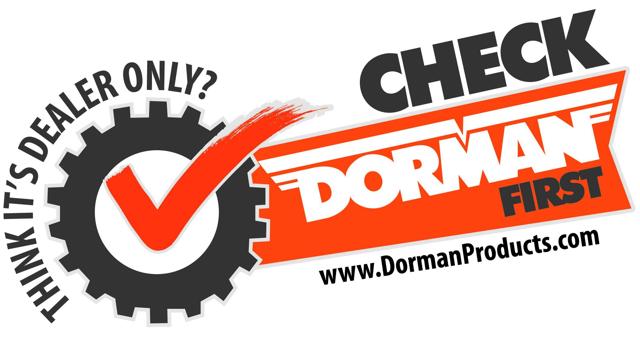 In 2017, the company also assumed operations of a distribution facility in Montreal as part of its acquisition of MAS Automotive Distribution. The Montreal operation is being folded into the new Tennessee facility.

The consolidations were supposed to be completed halfway through the year, but Dorman is delaying completion until the end of the year in an attempt to minimize disruption to clients. Costs of this transition have been higher than expected, but the company expects operations to resume as normal beginning in 2020.

It has also been impacted by tariffs in the ongoing trade war with China, but those increased costs have been passed on to the consumer, and tariffs have not impacted EPS.

Market dynamics look good for Dorman. There are a couple of factors favoring the company. Though fears have subsided in recent months, an economic slowdown would likely benefit Dorman. Additionally, the average age of cars on the road continues to climb. 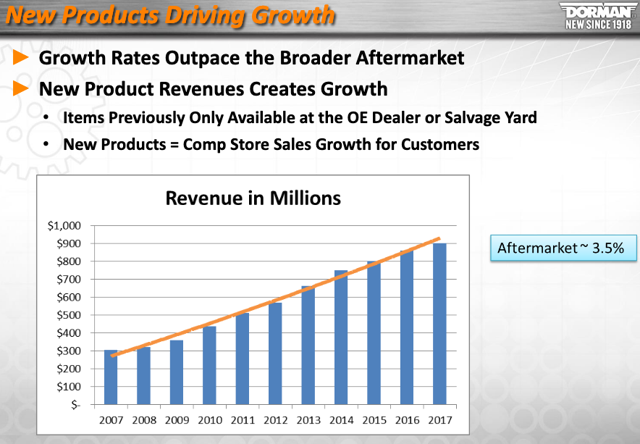 Though Dorman had strong Q1 and Q2 revenue growth of 7%, its strongest performance in the last decade came when the country struggled to recover from the financial crisis. Growth peaked in 2013 with nearly a 17% revenue growth rate. As the company's revenue growth has slowed in the years since, car sales have continued to tick upward and have leveled off in the 17 million per year range.

Source: YCharts, which aggregates sales data from the federal government

Dorman believes it is in a position to exceed the growth of the general automotive aftermarket (3.5%) in the years ahead. Any recession aside, the company expects growth to result from the aging of cars on the road. The average age of vehicles is increasing.

In addition to the above graphic, a 2016 article by Automotive News cited research that showed the fastest-growing age group of vehicles on the road through 2021 were those 16 years or older. The number of old cars on the road was expected to increase from 62 million in 2016 to 81 million in 2021, an increase of 31%. The high quality of vehicles is a reason cited for the improving lifespan of cars.

It could be argued Dorman is fairly valued at ~$80. The company looks like less of a value from an EPS standpoint than it did prior to Q2 after the earnings hit the company expects this year.

But the EPS problems are temporary, and we are likely to see a resumption of strong EPS growth beginning in 2020 once facilities have been consolidated and operations continue as normal. The company has also been a consistently strong double-digit generator of free cash flow over the last decade.

Prior to the cost hiccups in Q1 and Q2, the stock had approached $100 in anticipation of continued strong EPS growth. Once the facility cost issues are ironed out, I expect the stock to approach $100 again on EPS growth strength and wouldn't be surprised to see this occur within the next 12 months.

Even after the recent price surge to ~$80, shares are still reasonably priced for a company that expects continued strong revenue growth in 2019 and improved operational efficiency beginning in 2020.

Disclosure: I am/we are long DORM. I wrote this article myself, and it expresses my own opinions. I am not receiving compensation for it (other than from Seeking Alpha). I have no business relationship with any company whose stock is mentioned in this article.