We believe, based on demographic trends, that Grubhub (GRUB) and Uber (UBER) are good, long-term buys here. Based on a number of trends we will evidence in the article, we believe GRUB and UBER will benefit most from them, and traditional restaurants such as McDonald's (MCD), which aren't part of the delivery model, will suffer.

Food delivery is an interesting concept. It has been around for a long time, but outside of special gourmet markets, traditionally, the choices for delivery have been slim; Chinese, pizza, or a local place. Companies like Grubhub and Blue Apron (APRN) are changing that in big ways. Uber Eats has entered the market, as well as companies like Home Chef, now owned by supermarket chain Kroger (KR).

According to Crunchbase data, there has been more than $28 billion USD in funding in the top 1,000 names listed under the category "Food Delivery:"

Of course, Amazon (AMZN), the company that practically invented the concept of mass delivery, also has a product "Amazon Fresh" that has had mixed results across the country. But each of these services differs in their offering. Amazon Fresh brings groceries to home, but you must choose from the Amazon Fresh catalog. Grubhub, on the other hand, allows any vendor to sign up, so you can order food from anyone on the network. Local places or chains, any store can sign up. Grubhub takes a percentage from all orders.

It's a tough choice for restaurants because they operate on thin profit margins. Do you really want to give away a double-digit chunk of your margins to a delivery service? Of course, part of the costs restaurants have is the overhead of the location (rent, utilities, staff), all of which could be eliminated with a delivery-only service. That's one part of this trend that's going to disrupt the traditional ways we eat, according to Forbes author Douglas Bell:

Alarm bells should be ringing for casual dining restaurants, large and small, because an unstoppable wave of disruption is coming. They will soon find themselves in a price war with U.K. tech startup Deliveroo, Uber Eats, and (separately) Uber Founder Travis Kalanick, competing for market share against thousands of new "virtual restaurants" (aka "dark kitchens" or "cloud kitchens" or "ghost kitchens"), that can be set up and serving customers in almost any location-for a fraction of the normal cost.

You might wonder why publicly-traded companies like Grubhub have underperformed if this sector is so explosive? Maybe it's just a question of time.

Overall Trends in the Restaurant Industry

What are some of the demographic trends in the restaurant business, and more importantly, how much of that is shifting to online ordering and food delivery? Also, how much of the traditional market is open to shifting to a delivery model? According to Statistia.com:

What's interesting about that $30 billion USD figure is that's just about what VCs have invested in the industry in the past 3 years. What this doesn't tell us are the profit margins, which are razor thin. One model that is encouraging for the success of the food delivery business is Amazon. Before Amazon became a behemoth, many believed that selling books and toilet paper online was not a profitable business because the margins were thin, and there was too much competition. However, Amazon proved that there was a business model there, and it was possible to make a market out of it.

Of course, as noted in many analyst reports about Uber Eats, the growth of the food delivery business is also good for companies like McDonald's which have seen their sales soar. See this stock chart:

Bottom line, restaurants like MCD are going to benefit from this trend, while traditional dine-in restaurants that choose to not participate in this growing economy will fail. Certainly, there are some exceptions to this, such as luxury 5-star steakhouses and Michelin restaurants that service one price, 8 course meals. You can't deliver that at an economically feasible price. But the high-end of the market is a very small fraction in terms of numbers and in dollars as well.

The Industry by the Numbers

They say that the food delivery business will soon be worth $200 B. But the whole restaurant industry is worth $863 billion. We're not speculating that restaurants are going out of business anytime soon. However, it's a big market, and things are changing across all verticals. And these are some amazing statistics about the restaurant industry from restaurant.org:

Could Grubhub be on the verge of a huge breakout (in a business sense, not a trading indicator sense).

Globally, there are companies like Gojek and others that, while aren't exactly food delivery, might be competitors. This is the issue with disruptive companies - they create new markets, making it difficult to decipher which sector they are truly in.

We believe Grubhub to be a good play here, as we have seen Kroger buy out Home Chef. There is strength in numbers, and in an industry that's nearly $1 trillion (the restaurant industry), it's going to be good to have big bedfellows who can protect you from what lurks deep in the shadows of Michelin.

We believe this, even considering what Chanos has to say about the thin margins on CNBC:

Investor Jim Chanos is betting against Grubhub, and said the food delivery company makes almost nothing per order. Chanos, a famous short seller and founder of Kynikos Associates, made the comments on CNBC's "Halftime Report" Thursday from the Delivering Alpha conference, presented by CNBC and Institutional Investor. He predicted fees will come down, while employee costs will rise. "Right now, GrubHub is making almost no money per order - it's something like 15 cents," Chanos said. "There's just no margin in this business."

You might ask why we would include a bearish argument in a bullish article. The reason is because it's the perfect opportunity to refute it. On the surface, he's correct. Margins are thin. But it's the market share they are after. Look what happened to Facebook (FB). For years, they were losing money, building a user base. Then, they became popular with advertisers, and their net income exploded. Those kinds of metrics are hard to price. So, we agree with Chanos and in the short term, this stock may have downward pressure. But when you are investing in fundamentals, not day trading, you have to take the daily hits and hold on to your long-term guns.

For our security specific analysis, we've picked GRUB, UBER, and APRN. You're probably wondering why, considering they aren't great performers. The answer is that they are all innovators. GRUB practically invented online delivery. UBER is not specifically in the food business, and that's why we like UBER. APRN is now suffering from lots of competition, but they were a first big mover in the space.

As with any restaurant trend, the trends spread and dominate, starting with Orange County, CA and filtering their way up the coast, before they go to Chicago, New York, Florida, and other places.

GRUB has been trading since April 2014 and has been as high as $146 and currently trading around the $64 level, which is a market cap of about $5.86 billion. You can see the run up and down in this chart:

Based on this, we believe GRUB is a buy. I know what you're thinking, another overvalued P/E ratio, here we go again. But the fact is that we've been bearish on Facebook for years, and a high P/E ratio isn't necessarily the sign of a top. It's not an RSI indicator. The P/E ratio is 234, which is high. However, this is not a value play. This is a play in a demographic shift in the food industry. We're not rocket scientists here. $28 billion has been invested in the Food Delivery industry (and that's just in the top 1,000 companies), and US market leader GRUB is worth about $3 billion.

Here is another food delivery company that has been hammered, although the model is a bit different here. With Blue Apron, they deliver to your home meals which are easy to prepare and cook, with ingredients and instructions. Supermarkets like Publix (OTC:PUSH) and Kroger have started selling their own 'Apron' kits that you can purchase in their store.

Look at their dwindling stock price:

It reminds us of a company we recently covered that was thrown under the bus by their underwriters, ZK International (ZKIN). It's almost like a logarithm chart, going to zero. It seems to have leveled out around this area. A bet on APRN would be bottom-fishing in this sector. There is a lot of negative press about APRN, and that's why the stock is down. It would take a major demographic shift in order to make this stock pop. A buy here would be a buy into the sector. There is competition now such as Freshly, but as APRN was a first mover in the sector, they have an advantage. We like GRUB better, but this is important to include in any Food Delivery portfolio. Right now, the market cap is only $122 million.

Uber is actually the largest food delivery service with their Uber Eats service. Of course, being primarily a ride-sharing company, an investment in UBER is also an investment in ride sharing. So, this would be the second choice after GRUB to get into the trend of Food Delivery. However, investors should be warned about UBER they will not likely turn cash flow positive for some time. They claim that 'scale' is what's going to make them successful, and to their point, they are scaling massively. They have a 13x increase in bookings in a 3-year period. Their total rides per day is growing astronomically, see this chart: 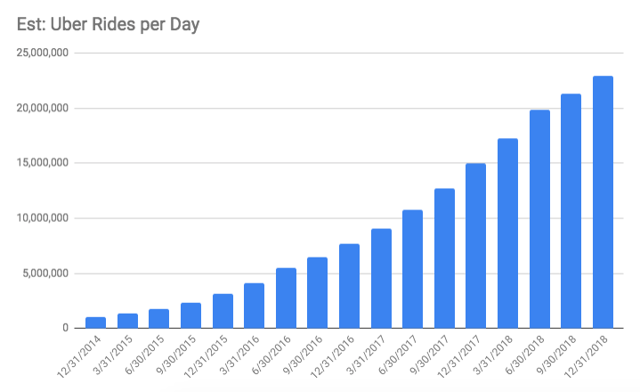 It seems like UBER is unstoppable. Considering the multi-sector exposure UBER offers, we would suggest investors who want more than just a Food Delivery company to go with UBER.

Now that we've looked at a few examples, what are the comparative trends in the restaurant industry as a whole?

Trends such as work from home, telecommuting, cloud life vs. bricks & mortar - are changing the way people do business. Food is a staple that people need, and is a safe bet. Food delivery isn't just about 'delivery', it's the spearhead of innovation in the disruption that's happening across the board. To buy in to the food delivery paradigm shift for the long term, the best bets are GRUB, UBER, and APRN. But investors should be prepared to ride out the downturns, so perhaps investing a portion of what you intend to invest is wise (legging in). It took companies like Microsoft (MSFT) and Apple (AAPL) 10+ years to see the fruits of the demographic shift, so if you do choose to use this strategy, be sure to have plenty of patience.

Disclosure: I am/we are long GRUB. I wrote this article myself, and it expresses my own opinions. I am not receiving compensation for it (other than from Seeking Alpha). I have no business relationship with any company whose stock is mentioned in this article.