In my last article on Johnson Outdoors (NASDAQ:JOUT), I went over the company and the brands they own, as well as a brief multiples comparison. I suggest checking that article out here before continuing with this one, although it's not necessary. In this article, I go over my DCF analysis and come up with a fair value per share of Johnson Outdoors.

While past performance does not translate directly to future performance, I believe it can provide a solid starting point for a forward-looking analysis. Analyzing how well a management team has allocated capital and generated returns in the past can provide clues about a company's future.

Below I show two graphs (numbers in thousands of USD). The first shows revenue by year, while the second shows operating profit and net income by year. Johnson Outdoors occasionally has periods of little to no growth in revenue, and even slight declines in net income, but the numbers average out to solid growth. 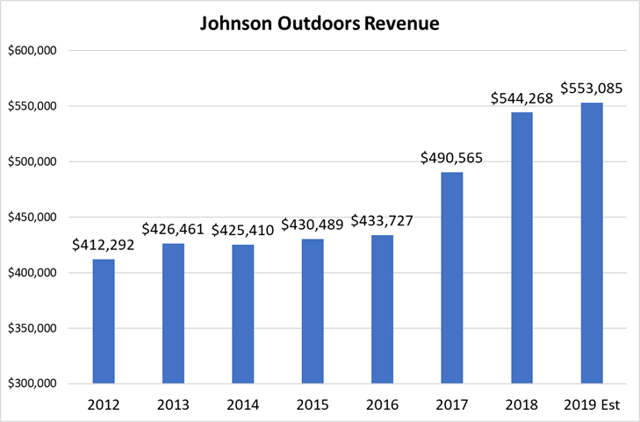 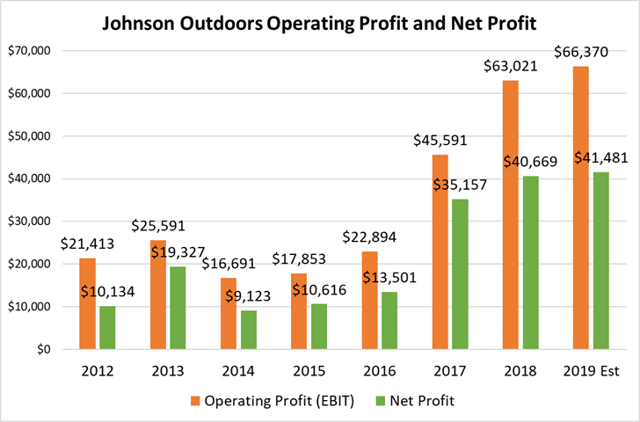 I am estimating a slight increase in fiscal 2019 from fiscal 2018 based on the first 9 months of fiscal 2019. Going forward, I believe it is reasonable, and even conservative, to expect a 1% CAGR in revenue on average over any given time period. In my last article, it was pointed out in the comments that Garmin, one of Johnson Outdoors main competitors, won best in show at the International Convention of Allied Sportfishing Trades for their new trolling motor. Johnson Outdoors could face revenue and margin pressure as the competition ramps up over the next year or so. However, I still think a 1% CAGR in revenue over a longer time frame is reasonable.

I often build a discounted cash flow model to value businesses, especially straight forward ones like Johnson Outdoors. Initially, with this company, I created a model with more aggressive numbers. Once I saw the fair value per share, however, I decided to tone it down for this article. For this analysis, I went with what I consider conservative numbers that I believe are still reasonable. The final number came out to a fair value per share of $93.78. This represents almost 70% upside to a conservative fair value. The assumptions in my model are as follows:

3) Revenue growth of 1% per year and in perpetuity.

4) Operating margin held steady at 12% every year and into perpetuity.

6) Depreciation and amortization of 2.5% of revenue. This is fairly consistent with previous years.

9) To calculate free cash flow I kept it simply and just subtracted CAPEX from NOPAT (or EBIT(1-T)) and added estimated non-cash expenses. 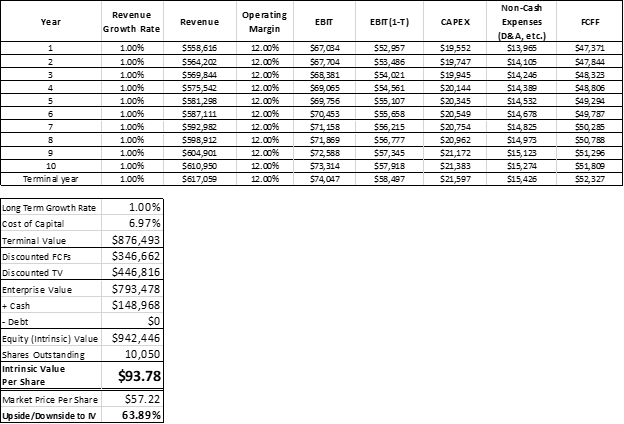 My model gave me a fair value of $93.78 per share. Compared to the stock, which closed on Monday, September 23 at $57.22, this model illustrates more than 60% upside to fair value.

I am confident in this model as this is not a growth company whose future characteristics are unpredictable. This is an excellent, steady company with management that has a strong track record of generating substantial returns. There is 60% upside for this stock if the company can grow revenue and earnings in the future at just 1%. My initial model, which used 2% growth and slight increases in operating margin priced shares at around $115.

Ultimately, this tells me that the market is pricing JOUT for significant revenue and earnings declines. That is the only way I see mid $50s per share as justifiable. The market may be right short term, as Garmin and other competitors bring strong showings, but I do not believe this will be the case over the next 10 years. This company is an attractive longer-term buy and hold.

This is a business with a strong track record of buying great companies and earning high returns. The company remains highly profitable today. With no debt and around $150 million in cash on the balance sheet (around 26% of the current market cap) Johnson Outdoors can withstand significant headwinds. The company just needs to keep executing by bringing competitive products to market and shareholders should do well in this stock over time.

Lukas Wolgram
4.12K Followers
Check out my FREE and PAID substack newsletter Uncommon Profits here: https://lukewolgram.substack.com .      I discuss 1-2 well-researched investment ideas every month as well as updates on my core holdings for subscribers. Ranked #1 on Tip Ranks top 25 financial bloggers for accuracy as of January 1, 2021. Currently ranked #20 overall financial blogger as of June 1, 2021. I focus mostly on small and microcaps, as well as tech stocks and a few other great businesses.

Disclosure: I am/we are long JOUT. I wrote this article myself, and it expresses my own opinions. I am not receiving compensation for it (other than from Seeking Alpha). I have no business relationship with any company whose stock is mentioned in this article.