Jose Arias is a fictional character from the thriller novel, "The Synod". Yet, he makes some very relevant comments when a friend asks him to help find information needed to defeat the plots of a group of murderous gold manipulators:

"...Try the week of March 18th, 2009. It was just before the Fed first announced its multi-trillion dollar “QE” money printing program. That morning, they mercilessly attacked the price of gold..."

Fast forward to 2019. The ECB's announced, on September 12, 2019, a new program of QE. On September 4, 2019, a little over a week before the announcement, the spot price of gold reached a high of $1,546 per ounce at the London close, after rising for several months. Suddenly, and for no apparent reason, on September 5, 2019, gold prices began to plummet. This culminated with a low on September 11, 2019 of around $1,490 when the ECB made its announcement. No news supported the price decline, but "technical analysts" claimed that it happened because the metal was "overbought." 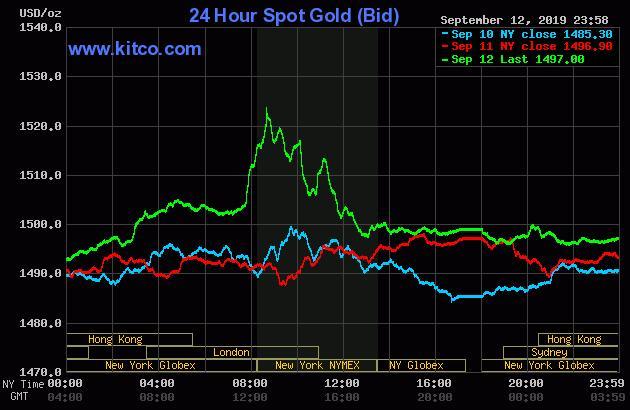 Is it all a coincidence? On the very day gold reached its lowest low, the ECB announced that it would be revving up its printing presses. That should have driven gold much higher. In fact, that's exactly what happened for a very short time. Gold prices rose by some $20. Then, they were hammered down by midday. Market pundits claimed that investors had decided the ECB's promise, to print $22 billion euros every month for a year, was insignificant. Is that true? I guess we'll never know for sure. But, one thing is certainly true. No central bank can suppress the price of anything forever.

There's more here than meets the eye. The ECB announcement was open and obvious. Central banks usually try to avoid being obvious. They only act in obvious ways when they want to send out a message. In the case of open and obvious money printing, generally speaking, they only admit to it when the banks they serve are close to insolvency. At such times, as was the case in 2009, when the Federal Reserve began QE1, the benefit that an overt promise to print new money provides, in terms of reassuring bank executives, exceeds the cost of being accused of being a "counterfeiter" of money. An overt QE announcement, like the one just made by the ECB, is a solemn promise that the insolvent banks won't be forced to turn to the free market for funds.

The Federal Reserve hasn't been open and obvious about returning to printing money. However, about a week later the ECB announcement, it covertly announced the resumption of money printing. Modern central banks print money via "open market operations". "An open market money printing operation (OMO) occurs when a central bank gives money to a commercial bank or group of banks." The money is newly created by the central bank for the purpose of bank assets that might, otherwise, be hard to sell.

It seems obvious that the ECB made its open announcement that it would reopen the printing presses with the aim of reassuring one or more insolvent European banks. Some speculate that the actions of the ECB and, now, those of the Federal Reserve, as we are about to discuss, are all about the alleged insolvency of Deutsche Bank. This is not the first time that the Fed printed money via TOMOs.

From 2001 to 2009, the Fed refrained from permanent open market operations (POMOs). As a result, no one accused it of "printing money." The operations were, supposedly, "loans" with an obligatory "next day", "next week" or "in a few weeks" repayment date. In practice, the running total of overnight, week long, and multi-week supposed "loans", was never repaid until QE began in March 2009. But, the amount rose from a few billion in 2001 to hundreds of billions of dollars by the time they were finally repaid.

The Fed Has Already Resumed 'QE' But Calls It Another Name

On September 17, 2019, the New York Federal Reserve announced that it would issue "overnight" TOMOs in the amount of $53.15 billion dollars. The next day, September 18, 2019, when those alleged "loans" (a/k/a gifts) were due to be repaid, instead of demanding the money back, the Fed reissued the $53.15 billion and added billions more, bringing the total loan to $75 billion. The next day, September 19, 2019, instead of getting its money back, the Fed renewed all $75 billion again. Then, on September 20, 2019, it did the same thing.

The weekend came and went, and Monday, September 23, 2019 arrived. The Fed reissued only $65 billion worth of new money that day. We can only assume that the borrower(s) managed to repay $10 billion for the first time, although it is possible that the numbers were massaged by sleight of hand accounting. But, regardless, by the very next day, Tuesday, September 24, 2019, the Fed had not only reissued the original $75 billion worth of "overnight" loans, but added $30 billion in two week "loans", for a grand total of $105 billion. It announced it will issue two more $30 billion dollar TOMOs before the end of the week.

It appears from the counterparty list that 2 banks received the TOMO "loans". We have no idea how the TOMOs were distributed. One bank could have taken $1 and the other could have taken billions. Will the bank(s) be able to pay it back in a timely manner? They never have in the past, so it's not likely now. You can be sure that when the bank(s) can't come up with the money as payment time arrives, unlike the treatment you or I would get from our creditors, the Fed will renew and expand the loans without limit.

The Fed is refusing to call the TOMOs "QE" and continues to insist that the endlessly renewable "overnight" and "week long" loans are merely "temporary" measures. This isn't the first time for that. These TOMOs will be as endlessly renewable as the ones from 2001 to 2009. All the while, you can be sure that the Fed will claim they are addressing nothing more than "temporary" issues in the money market. The borrowing bank(s) will be called upon to repay only when the Fed decides that the coast is clear. Then, the "loans" will be converted into POMOs (a/k/a "QE"), as in 2009, and the banks will "repay" the funny money with permanent money given to them by the central bank.

The difference between now and then is solely in the sheer enormity of the transactions. The opening salvo is ten to fifteen times higher than it was back in the early part of the 21st century. If history is any judge, both the frequency by which this new money is released, and the total amount of it, will slowly and steadily build up over time. It will happen month after month and year after year. It seems likely that this second round of TOMOs will add up to trillions before it is finished. It has already mounted to $165 billion and we are just a few days into the process! This compares to a couple hundreds billion near the end in 2009

The question is why a bank or group of banks is so desperate for money? Whoever it is can't get anyone to lend to them in the free market in spite of the fact that big American primary dealer banks are sitting on trillions of dollars in reserve deposits, created during ten years of QE. Instead, the big banks are allowing the NY Federal Reserve branch (which they closely control) to do the "lending". The banks in question are not in the charity business. Therefore, the most likely reason is that failure of an insolvent bank(s) would cause their intricate web of hundreds of trillions worth of cross guaranteed derivatives to fail. The end result would put JP Morgan Chase, Goldman Sachs, Morgan Stanley, and Citibank into bankruptcy too. An insolvency of Deutsche Bank would fit the bill.

In any event, the Federal Reserve's debasement of the US dollar, regardless of the name they give to the vehicle that causes it, will cause precious metals prices to react very similarly to the way they reacted when the dollar was being debased in the early part of this century. Precious metals prices are going to rise as they did then. But, the rise will be more dramatic this time because we're now dealing with a lot of central banks printing money at the same time.

During the early years of the 21st century, as you may recall, the ECB was a mere babe, steeped in the innocence of her birth. Now, it is heavily printing. The Bank of England, the Japanese Central Bank, the Chinese Central Bank and many other central banks will all follow and contribute to the tidal wave of new funny-money. I expect the printing extravaganza to take precious metals and mining share prices on a fantastic ride upward. The bottom line is that the money supply is, once again, increasing at a fantastic rate. The value of the existing stock of currency is just as effectively being diminished as it would be if you called the operations POMOs (a/k/a "QE").

What About American Stock Prices In General?

Obviously, the general stock market is also juiced by any form of money printing. But, as opposed to precious metals stocks, which are still depressed well below their 2011 highs, the prices for equities in general are historically high. The overall stock market, as indicated by the S&P 500 index, is now selling for about four times its low in 2009. And, if we glance back at the period 2001 to 2009, it is plainly obvious that, in the midst of the heavy money printing via TOMOs, there were still a significant recession and heavy stock price pullback because stocks became overvalued from the post dot.com TOMO-based money printing.

Because stock prices climbed so high as a result of QE already, I don't see much upside in the average stocks, at this point in time. That said, it really depends on how much of a flood of funny money the Fed is willing to create. It can float all boats if it is big enough, but might also trigger heavy stagflation or hyperinflation at the same time. Precious metals mining stocks seem to be a very good bet at this point in time, especially those that are still depressed.

All of that having been said, this is not a get-rich-quick scheme. Remember that whenever there is a sharp increase in prices, as over the last few months, the market for physical metal, which is always price sensitive, will inevitably slow dramatically. The average emerging market buyer must get used to the newly higher prices and must stop worrying about a return to lower prices before gold and other precious metals can move significantly higher.

Avery Goodman
2.09K Followers
Avery B. Goodman is a licensed attorney and the author of the action-packed Wall Street thriller "The Synod". He holds a B.A. from Emory University, where he concentrated on history and economics. He also holds a Juris Doctorate degree from the University of California at Los Angeles Law School and is a member of the Bar, licensed to practice law in several jurisdictions. His career has consisted not only of prosecuting cases on behalf of clients, but in judging the claims of others. He serves he roster of neutral arbitrators of the National Futures Association (NFA) and the Financial Industry Regulatory Authority (FINRA).
Follow