The daily trading ranges in the silver market have increased dramatically in September. Before mid-July, silver remained below its high for 2019 at $16.20 per ounce even though gold broke out to the upside in June. The yellow metal rose above its July 2016 high and level of critical technical resistance at $1377.50 in June. However, silver has yet to reach its July 2016 peak, which stands at $21.095.

Silver got up to a high at $19.75 on the December futures contract and $19.54 on the continuous contract on September 4. During September, daily historical silver volatility moved significantly higher. Meanwhile, the silver futures market moved above its 2018 and 2017 highs in August and September, but the 2016 peak remains elusive.

Bull markets rarely move in a straight line. Corrective periods and price consolidation often help digest gains and build strength for further moves on the upside. The current price volatility in the silver market provides increased opportunities for intraday traders. The Velocity Shares 3X Long Silver ETN product (USLV) and its bearish counterpart (DSLV) are excellent short-term tools for those who do not venture into the silver futures arena.

A clarification on the manipulation issue

Last week, I published an article on Seeking Alpha that some readers interpreted as an apology for the traders and bank accused in the recent spoofing indictments. I want to state unequivocally that those who break the law and do the crime deserve the time and penalties if found guilty.

I acknowledge that the actions to manipulate prices on a short-term basis undoubtedly caused losses for some market participants. However, I do not believe they had the long-term impact to push the price of the metal lower. Moreover, spoofing is a lot more widespread than most market participants think. My mother used to ask, "If everyone is jumping off the Brooklyn Bridge, does that mean you have to do the same thing?" The bottom line is that spoofing is illegal, and I was not making any apology for the behavior.

When it comes to JPMorgan, there are a host of former traders and managers at the firm who could find themselves in lots of trouble over the coming weeks and months. Some allege that the illegal activity was imported from Bear Stearns after the 2008 financial crisis and the merger of the two institutions. Dodd-Frank caused financial institutions to hire an army of compliance staff. Where were they at JPMorgan? Layers of senior managers oversee the precious metals business at the bank. Management's job is to monitor the activities of their staff. Ignorance of repeated offenses is no defense; it is a sign of either incompetence or participation. The RICO charge could suggest that further criminal charges are on the horizon. If not, the DOJ jeopardized their case by overreaching with the charges.

Meanwhile, I certainly apologize to anyone I offended with either last week's piece or the comments. Silver has a long history as a metal that provokes a wide variety of passionate opinions. I believe it is important to raise questions on both sides of the silver argument. My concern is that the latest charges will serve to feed those who mislead with wild theories that a cabal controls the price of silver and purposely depresses the price of the metal.

Few markets evoke the emotional response as precious metals. Gold and silver are hybrid assets. While both have applications as commodities, they both have long histories as a means of exchange or currencies. Gold has been analogous to banknotes while silver the change or coinage in our pockets or change purses.

The global nature of gold and silver make them unique assets. Therefore, it is no surprise that that emotions can run high at times in the metals. As silver is the more volatile market, the emotions have always run high. One of the issues in the 1898 Presidential election was a debate over which metal should back the US dollar. William McKinley, the victor, favored gold, by William Jennings Bryan advocated for a silver standard.

A significant statement on Sept. 23

Gold took off on the upside in June as it climbed above its technical resistance level. The trade war and falling interest rates lit a bullish fuse under the price of the yellow metal. 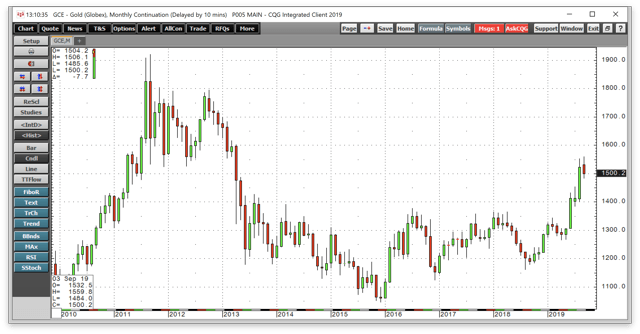 The monthly chart of COMEX gold futures shows that move that pushed the price of gold to its highest price since 2013. 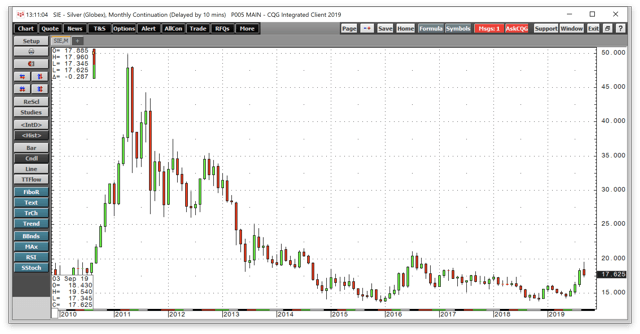 Meanwhile, on September 23, silver attempted to recover from its recent price correction. 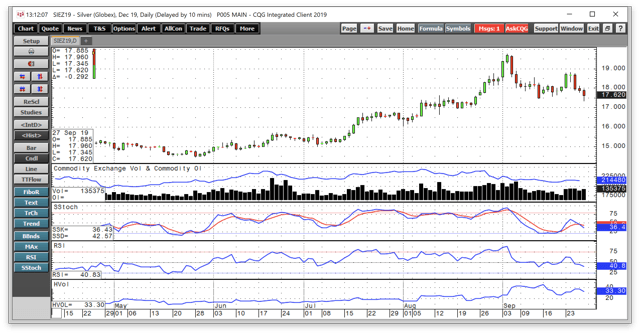 The daily chart of December COMEX futures highlights that silver lurched to the upside on Monday, September 23 rising from a close on September 20 at $18.055 to a high at $18.78 on the following trading session. After moving three cents higher on September 24, the price fell back below the $18 level by late last week.

Open interest, the total number of open long and short positions in the COMEX silver futures market, has been flatlining between the 210,000 and 220,000 contract level. Price momentum and relative strength indicators were below neutral territory at the end of last week. However, daily historical volatility has moved from around 26% at the end of August to a high at 45.53% and was at 33.27% on September 27. The rise in the measure of price variance reflects the wider daily trading ranges in the silver futures market.

I expect a challenge of the July 2016 high

The ongoing trade war between the US and China, the situation facing the Middle East, Brexit, the impeachment inquiry and upcoming Presidential election in the US together present a compelling case for rising uncertainties in the global political and economic landscapes. Silver and gold prices tend to rise during periods of uncertainty because of their long histories as safe-havens or assets that are stores of value.

The many issues together present a compelling case for a continuation of bullish price action in the two precious metals markets. Price volatility often rises during bull markets as periods of sharp corrections and spikes to the upside become the norm rather than the exception.

I believe that silver is heading for an eventual challenge of the July 2016 high at $21.095 per ounce. Above that price, all bets could be off for the metal as a technical breakout on the upside would likely become a self-fulfilling prophecy as herds of buyers could flock to the market pushing the price of silver higher. After rising above the highs of the past three years over the summer, silver seems to be building cause of a test of its level of critical technical resistance.

If silver is off to the races, USLV will be explosive

I expect that the silver market will be high volatility over the coming months. We should continue to see lots of two-way price action and a continuation of wide daily trading ranges. Volatility creates a paradise of profitable opportunities for nimble traders with their fingers on the pulse of a market.

The most direct route for a risk position on the long or short side of the silver market is via the futures and futures options that trade on the COMEX division of the Chicago Mercantile Exchange. For those who do not venture into the futures arena, the Velocity Shares 3X Long Silver ETN product and its bearish counterpart DSLV magnify the price action in the silver market on a percentage basis. The fund summary for USLV states:

The investment seeks to replicate, net of expenses, three times the S&P GSCI Silver index ER. The index comprises futures contracts on a single commodity. The fluctuations in the values of it are intended generally to correlate with changes in the price of silver in global markets.

The USLV product magnifies the price action on the upside while the DSLV has inverse exposure on the downside of the silver market. Both products are only appropriate for short-term risk positions, as the leverage causes significant time decay. If silver does not move in the higher in the case of USLV or lower when it comes to DSLV, the value of the products tend to evaporate rapidly. Moreover, when silver volatility declines, and the price does not move much, both products lose value. 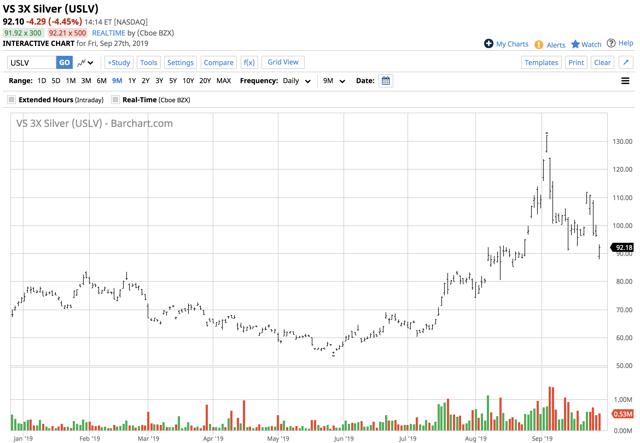 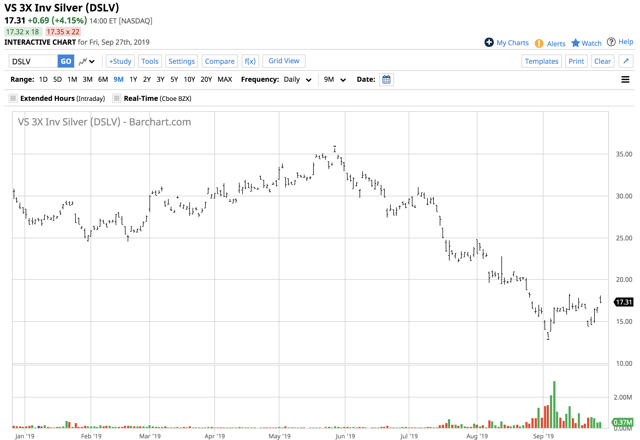 With volatility rising in the silver market, USLV and DSLV are products that can magnify the price action for market participants looking for trading opportunities that do not wish to enter the futures market.