As I continue to explore beaten-down cyclical companies, Methanex (NASDAQ:MEOH) has caught my eye as a great company trading near 52-week lows. Methanex has seen its share price beaten up along with the broader industrial sector and it is looking like a great long-term investment valued only at a 7.7x TTM P/E and 3.6x Price to Cash Flow. As this article will explore, even though the company has cyclical swings, they have achieved impressive average ROE and ROIC of 14.7% and 9.3%, respectively, over the past decade. Methanex's 4.1% dividend should provide long-term investors some comfort as they wait for the market conditions to approve.

An Introduction To The Business

Trading on both the U.S (MEOH) and Canadian exchanges (MX.to), Methanex has a market cap of $2.7B. Methanex is the world's largest producer and supplier of methanol to major international markets in North America, Asia Pacific, Europe and South America. To meet the needs of customers on a global scale, the company has production sites in Canada, Chile, Egypt, New Zealand, Trinidad, and the United States with a team of approximately 1,300 employees. Methanex's revenues are segmented globally as follows: 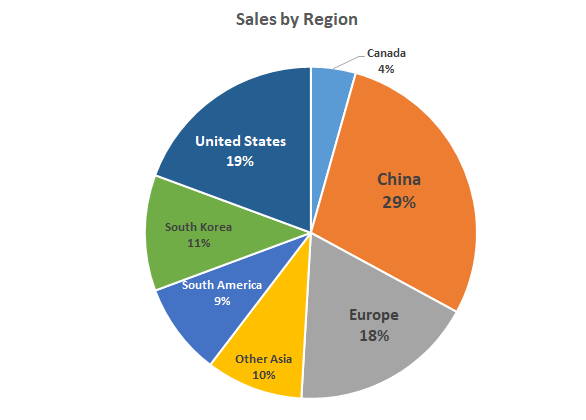 For those like myself who do not know their uses of methane off the back of their hand, I had to do some research into the topic to get more comfortable with the business. The uses of methanol range from being used as an input in chemical production for end products such as adhesives, foams, plywood subfloors, solvents and windshield washer fluid; to methanol's use as an energy source which accounts for approximately 45% of the world's methanol use. Methanol can be used on its own as a vehicle fuel or blended into gasoline to produce a high-octane, efficient fuel with lower emissions than conventional gasoline. It is emerging as a clean-burning marine fuel that can cost effectively meet the International Maritime Organization’s increasingly stringent emissions regulations.

Also of note, is the growing use of methanol in China's gasoline market. Similar to how ethanol is currently blended into motor gasoline in the United States, methanol is blended into gasoline in China. According to the U.S. Energy Information Administration, China has seen the use of methane as a fuel source rise over 150% since the approximate 200 thousand barrels a day in 2009 to over 500 thousand barrels a day in 2016. While much of China's methane needs are supplied domestically through the production from coal, smaller amounts are imported from across the globe and that is where Methanex would find its share of the Chinese market. 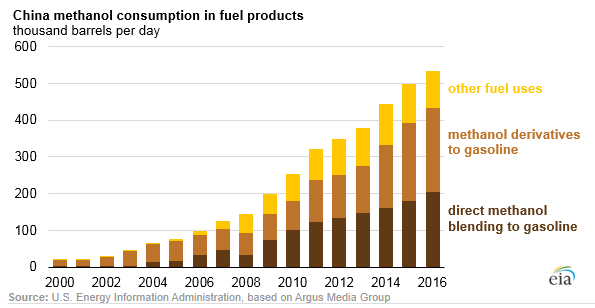 A Profitable And Growing Business

Methanex's strong operations have allowed the company to achieve average return on equity [ROE] and return on invested capital [ROIC] of 14.7% and 9.3%, respectively, over the past decade. While the company is cyclical along with the industry, this average level of profitability is right around my rule of thumb of 15% ROE and 9% ROIC, allowing me to be confident that, in my opinion, the company is able to maintain and continue to increase its intrinsic value over a business cycle. That being said, Methanex is a cyclical company that has had two earnings deficits in the past decade in 2012 and 2016. 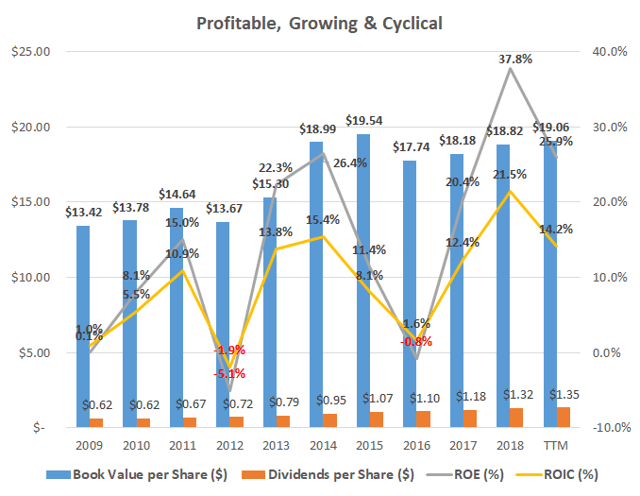 On the growth side, book value per share has grown from $13.42 in 2009 to $19.06 in the past quarter, which, when combined with the dividends paid out from equity, has an average growth of 9.8% annually which further supports the ROE and ROIC averages. Revenue and EPS growth have been solid over the past decade with annual averages of 5.4% and 14.3% respectively.

Methanex has noticeably increased financial leverage over the past decade. With financial leverage currently at 3.38x and the company's interest coverage ratio at a much lower 5.90x in the trailing twelve-month period, the company is more financially leveraged and might have to face larger earnings deficits come the next cyclical downturn. 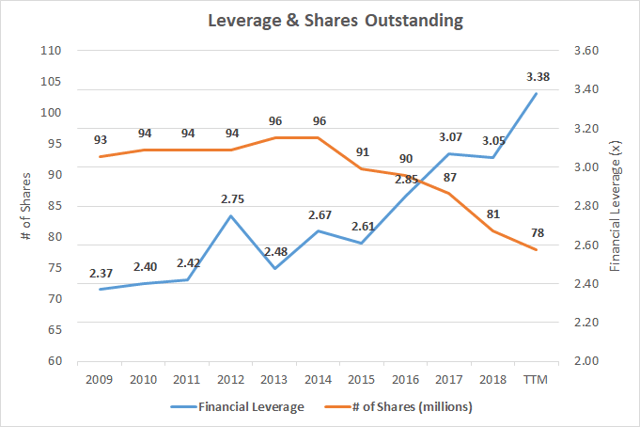 Notable from the above graph is also the massive share repurchases that have taken place at the company since 2014. Since this period, Methanex has lowered its outstanding shares by approximately 19% from 96 million in 2014 to 78 million today. I always like to see buybacks from a company as it shows good capital discipline and management's long-term faith in its own business. However, with these repurchases taking place alongside rising financial leverage in the capital structure, they do not necessarily look sustainable for long-term investors in addition to the current 4.1% dividend.

I always like to examine the relationship of average ROE and price to book value in what I call the Investors' Adjusted ROE. This relationship is especially important for cyclical companies and something I consider similar to Shiller's CAPE ratio but a little simpler to calculate in my opinion. It examines the average ROE over a business cycle and adjusts that ROE for the price investors are currently paying for the company's book value or equity per share.

With Methanex earning an average ROE of 14.7% over the past decade and the shares currently trading at a price to book value of 1.86x when the price of its shares is $35.51, this would yield an adjusted ROE of 7.9% for an investor's equity at that $35.51 purchase price, if history repeats itself. While this is slightly below the 9% that I like to see and adding a 3% growth rate to represent the company growing alongside GDP could increase this potential total return up to 10.9%. 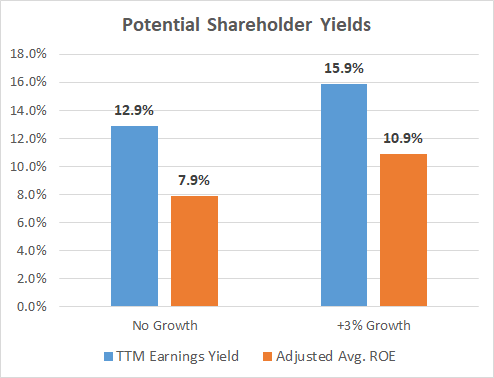 Methanex is a good business with strong operations and a great track record of returning profits to shareholders. While cyclical in nature, the company is nicely profitable over a business cycle with average ROE and ROIC of 14.7% and 9.3%, respectively. Financial leverage while not alarming, would be my biggest concern as it sits at a decade high of 3.38x today and the company's interest coverage ratio is a modest 5.9x in the TTM period. For long-term investors who do not mind the cyclical swings this looks like a good business to invest in near 52-week lows.

Cameron Smith
2.63K Followers
Through always enjoying the concepts of value creation and business management it has allowed me to explore potential investments at an academic and strategic level. My investment ideas are presented through two sides; with the most important being financial performance and the second most important being valuation. In my opinion, if a company does not meet certain financial criteria, a valuation of that company can only mean something if you are investing in the senior debt at best or if you are purely speculating at worst. Focusing on return on invested capital (ROIC), I classify potential investments as either long-term/indefinite investments, medium-term investments, or value traps. 1) Long-term/Indefinite: ROIC of greater than 9% and able to grow intrinsic value 2) Medium-term: ROIC of 6 – 9% and able to maintain intrinsic value. 3) Value Traps: ROIC of less than 6% and not able to meet their cost of capital My investing philosophy stems from Warren Buffett’s focus on long-term moats and value creation while expanding to include potential growth opportunities from the approach of Peter Lynch. At heart, I am a long-term investor that looks to buy value opportunities at a 30 per cent discount to intrinsic value with the potential to earn over 9 per cent return on equity (ROE) adjusted for the equity value per share that is paid at purchase. I believe growth is always a subjective variable but can be estimated through a product of retained earnings and the companies return on equity given the variability of both in the past decade.Disclaimer: While the information and data presented in my articles are obtained from company documents and/or sources believed to be reliable, they have not been independently verified. The material is intended only as general information for your convenience, and should not in any way be construed as investment advice. I advise readers to conduct their own independent research to build their own independent opinions and/or consult a qualified investment advisor before making any investment decisions. I explicitly disclaim any liability that may arise from investment decisions you make based on my articles.
Follow

Disclosure: I am/we are long MEOH. I wrote this article myself, and it expresses my own opinions. I am not receiving compensation for it (other than from Seeking Alpha). I have no business relationship with any company whose stock is mentioned in this article.

Additional disclosure: I am long MEOH at an average cost base of $37.42.

While the information and data presented in my articles are obtained from company documents and/or sources believed to be reliable, they have not been independently verified. The material is intended only as general information for your convenience and should not in any way be construed as investment advice. I advise readers to conduct their own independent research to build their own independent opinions and/or consult a qualified investment advisor before making any investment decisions. I explicitly disclaim any liability that may arise from investment decisions you make based on my articles.