Over the past year, the shares of Kirby Corp. (NYSE:KEX) have dropped ~8.25% and that has put the company on my radar. In my view, this company proves that just because something has come down in price recently, does not make it a good investment. I think investors would be wise to avoid the shares at these levels. I'll go through my reasoning below by looking at the financial history here and by looking at the stock itself as a thing distinct from the business.

Kirby is the largest domestic tank barge operator in the United States. The company operates a fleet of 1,066 inland barges with a capacity of 23.633 million barrels of capacity and a fleet of 278 inland towboats. These operate throughout the Mississippi River system, as well as the Gulf Coast, Alaska, and Hawaii. The coastal fleet consists of 53 tank barges with 5.1 million barrels of capacity and 50 coastal tugboats.

The company's revenue is divided roughly evenly between Marine Transportation and Distribution and Services. Marine Transportation services' revenue is largely driven by the major petrochemical and refining companies that operate in the United States. The acquisitions of Higman Inland Tank Barges (Feb 2018) and Targa Pressure Barges (May 2018) drove revenue for this group higher in 2018, in spite of poor weather. In March of this year, the company acquired Cenac Marine Services, which consists of 63 inland barges with approximately 1.833 million barrels of capacity.

The Distribution & Services Group revenue is a combination of service and parts (~70% of group revenue) and manufacturing (30%). Revenue for this group in 2018 increased ~67%, and this increase is primarily attributable to the S&S acquisition that was completed in September of 2017.

Demand for tank barge transportation services is driven by the production volumes of the bulk liquid commodities transported by barge. The four commodities typically transported by barge (petrochemicals, black oil, refined petroleum, and agricultural chemicals) each have their own demand drivers, and the company has the flexibility to move from one to another relatively seamlessly.

A quick review of the financial history here suggests to me that there's a tenuous relationship between revenue and net income at Kirby. In fact, I ran a correlation on revenue, and net income is weakly negatively correlated (r=-.24). This prompts the question if growing revenue doesn't lead to growing profits, what will it take? In addition, Kirby has diluted shareholders over the past several years, with share count growing at a CAGR of ~1% since 2014. This negative relationship between revenue and net income on the one hand and dilution on the other has resulted in EPS growth of negative ~30% over the past five years.

The curious disconnect between revenue and net income persists when we zoom in on the first six months of 2019 relative to the same period a year ago. Revenue was down 1.8% from the prior period, but net income rose 50%. This result was achieved in large measure because of a reduction in cost of sales (down ~$40 million) and SG&A (down $27.4 million). In my view, it's fair to suggest that these recent drops on operating cost may be non-recurring, especially in light of CEO David Grzebinski's comments on the most recent quarterly call about the cost of business going up:

I would say this, you say peak pricing, but the cost of doing business has gone up and it continues to rise. You know this, Michael, the cost of new barges is up. Part of that's the steel price. We're seeing labor pressure as is most of the United States, right? We're pretty much in full employment. We're having to give some pretty healthy wage increases. And then there's the cost of compliance, as you are aware, there's Subchapter M with suspected towboats and that adds a whole another layer of cost to the industry.

Turning to the capital structure, there are a few areas of concern for me. First, the acquisitions of the past few years have driven goodwill and intangible assets to ~18% of the capital structure. In my view, this sets up the possibility of a goodwill write-down in future. This is the principal risk of acquisitions in my view. Additionally, long-term debt is up about 42% because of the S&S acquisition, Higman, and Harga acquisitions. This has caused interest expenses to jump ~118% over the past year. On the bright side, most of the debt (54%) is due between 4 and 5 years, suggesting that there's no immediate threat of a solvency crisis, though it is obvious that interest expenses will corrode earnings for the foreseeable future. 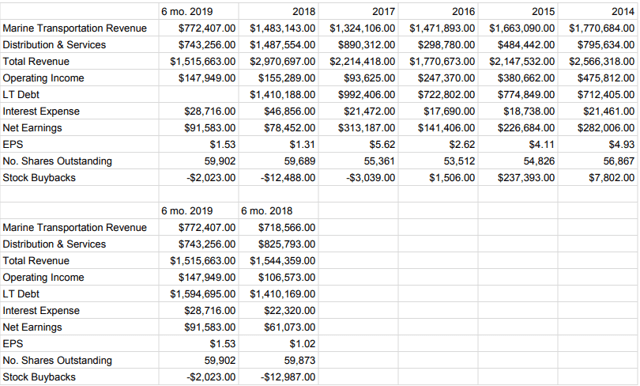 As regular readers are no doubt tiring reading (sorry about that), a great company can be a terrible investment if the investor pays too high a price for future cash flows. For that reason, I must spend some time on the stock itself as a thing distinct from the business. In particular, I want to answer the question "how optimistic is the market about a given company's future prospects?" Put differently, "how much are investors willing to pay for $1 of future earnings?" The more optimistic, the more dangerous the investment. The reason for this is that when investors bid up shares and assume things will go perfectly for the company, anything less than perfect execution in future will cause shares to falter. Thus, I'd rather buy a company that the overall market isn't too excited about. I judge the level of optimism in share price in a few ways. First, and most simply, I compare the PE multiple to the company's own recent past and to the overall market. The following chart shows Kirby's share price and PE plotted together. The shares are trading at a relative premium to their own history and to the overall market. This is troublesome for investors in my view.

Another way I judge the optimism embedded in shares is to use the methodology outlined by Professor Stephen Penman in his excellent book "Accounting for Value." In this book, Penman walks investors through how they can use price itself as a source of information. The method involves using a simple finance formula (and the power of grade 9 algebra) to isolate the "g" (growth) variable. In doing so, the investor uncovers, ceteris paribus, what the market must be thinking about future growth. Applying this methodology to Kirby at the moment suggests that the market is quite optimistic. The long-term growth forecast is somewhere between 15% and 17% which is ludicrously high in my view.

Investors do best when they can find a diamond in the rough that the market hasn't spotted yet. We're constantly on the lookout for companies that have a history of growing cash flows. We're looking for companies where management treats shareholders well. At least, as importantly, we're looking for companies that trade at a discount relative to their cash flow generating capacity. In my opinion, Kirby Corporation checks none of these boxes. There seems to exist a tenuous connection between revenue and net income, and interest expense is on the rise. Additionally, a significant portion of the capital structure is goodwill and intangible assets. Most troubling of all in my estimation is the fact that the market seems to be bidding up shares to near all-time highs on a price to earnings basis. I think price and value can remain unmoored for some time, but sooner or later they'll meet. I think investors would be wise to sell now before price drops to match value here.

Patrick Doyle
5.65K Followers
I'm a quant investment newsletter writer who marries fundamental analysis with the latest research in momentum. Over the past few years, I’ve developed a piece of software that helps me track the level of optimism and pessimism embedded in stock price. I seek to challenge the assumptions embedded in price by profitably exploiting the disconnect between what the market thinks and what is a likely outcome. I invest in those companies that have a greater than average chance of giving us all a surprise in the next few months.
Follow