The purpose of this article is to help investors who want to participate in the international bond space to weigh the relative benefits of using the Vanguard Total International Bond ETF (NASDAQ:BNDX).

The fund hedges currency exposure, though the bonds issued are themselves not dollar denominated. One might question why bother if the holdings are denominated in other currencies, while the fund hedges? The answer is two fold:

The goal of the fund is to passively manage to the Bloomberg Barclays Global Aggregate Ex-US Float-Adjusted RIC Capped Index (USD Hedged). What a mouthful!

The fund will only invest in non-dollar denominated, investment grade securities with a maturity of greater than one year out. The index is weighted by the amount of debt that floats freely on the open market. The index strips out the effect of price impact due to a fluctuating US dollar.

Fees are low as the goal is simply to manage to the index. 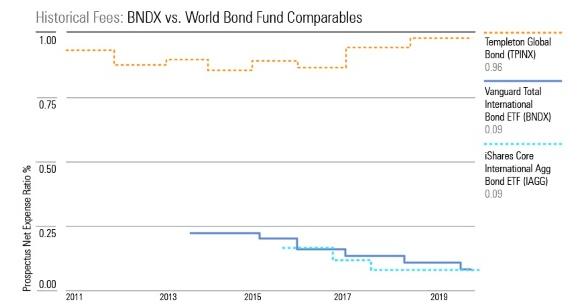 Fees on the BNDX are low, and have been trending lower since the fund's inception in May 2013. It's a good thing, too, as the yields on the underlying fixed income instruments have also fallen over that time span.

While the fee profile is quite impressive relative to actively managed funds (for example, Templeton Global Bond Fund (TPINX)), the BNDX has competition in the form of other passive funds, with the iShares Core International Aggregate Bond ETF (IAGG) coming chiefly to mind. IAGG also dollar hedges.

BNDX reported last portfolio turnover of 22%. The assets themselves are for the most part quite liquid, but turnover can churn up trading costs via bid-ask spreads. The fund's collective $137B in AUM (BNDX comprises of about $20B of the larger Vanguard allocation to the strategy) requires high liquidity to track and strategically alter its holdings.

BNDX is highly diversified in terms of the specific bond issues that it owns (almost 6,000 credits reside within the fund wrapper), but let's take a closer look.

BNDX has a 4.3% allocation to EM nations (China, Mexico and Indonesia are three of the larger holdings in this category).

Most of the fund's North American allocation is in Canada - 6.1%. Supranational institutions make up 2.5% of its assets. 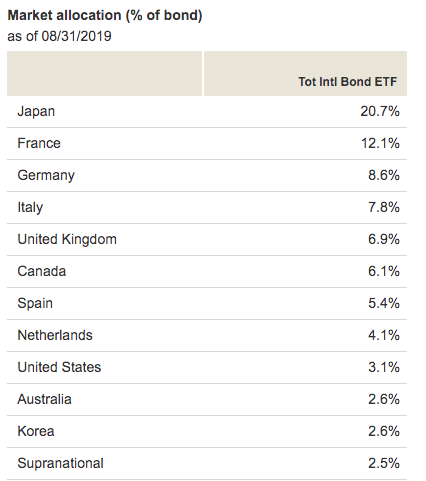 To my mind, the more worrisome aspect of the fund is that almost 21% is invested in Japan, where public debt levels relative to GDP are alarmingly high:

Add in Italian debt comprising 7% of the fund, and one might at least scratch his or her head in considering the wisdom of such an allocation.

The current yield to maturity on the assets, as reported by Vanguard, is now a measly .4% per annum. In a world of $16T in negative-yielding fixed income instruments, perhaps .4% qualifies as positively juicy.

The Vanguard Total International Bond ETF is a low-cost, dollar-hedged way for investors to access the investment-grade international debt markets.

One may for any number of reasons wish to have a stake in this space, and BNDX should be on the radar for ways to take part. Still, I'd give some careful thought to a construction that allows for a nearly 30% allocation to two countries (Japan and Italy) that one might argue are not fiscally sound... all for a .4% YTM.

I see this as more of a momentum play. If you believe that bond yields are going to just keep falling and falling, then this could be a (fairly) well diversified approach to that thesis.