It's a rather contentious idea because it seems obvious enough, yet many economists reject it as a useful management tool. The idea - the Phillips Curve - is that there's a tradeoff between unemployment and inflation. The lower we want inflation to be, the more unemployment we're going to have to put up with. Or, running the other way, if we're at full employment, then we're going to see inflation rising. At which point, the Federal Reserve raises interest rates to kill the inflation, thus raising the unemployment rate.

My own view is that the connection is indirect - that it's not full employment per se which causes the inflation, rather that this is simply a symptom of a general tightness in productive capacity. Which means, employment is sometimes truly the bottleneck in the economy; at other times, not. Thus, the variable predictive power of the curve. I should perhaps note that this is a distinctly heterodox economic view.

Still, in more orthodox terms, this is how the markets do view the economy. As and when we get to full employment, then inflation will arise. Thus, at full employment, the Fed will raise interest rates. The issue then becomes, well, what is full employment? Obviously, it's lower unemployment than we thought it was as we've been, for some years now, at what the US would consider full employment. And yet, we've not got much inflation.

Thus, the Fed rises don't seem to be happening. The question of when they will being what level of unemployment is actually going to cause inflation?

Thus, our fascination with intimations of coming inflation.

The best bet at the moment is to be looking for a further cut in interest rates from the Federal Reserve. Another 0.25% in October. For the inflation doesn't seem to be there. Thus, there's that room for such a cut.

Not yet it appears

There are several different ways of measuring inflation. The actual Fed target is core (i.e., without energy and food) personal consumption expenditures. We can also measure CPI and so on. The one we've got today is the producer price index. There's no direct connection here to the PCE target, the relationship is known to be variable. And yet, well, here, we have a measure of inflation that is falling - what's the Fed going to do?

The PPI report is from the Bureau of Labor Statistics:

Don't forget this doesn't translate directly over to the target PCE measure, but it is still an indication. 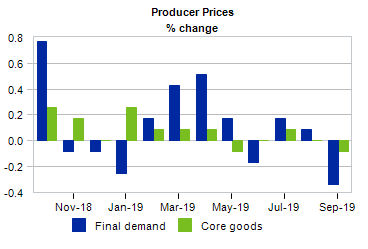 What does this actually mean?

We've the standard economics here. The Fed should raise interest rates either if there is inflation or if it's coming. No sign of that yet, despite our being at what we would think from experience is full employment.

However, we also know that the Fed wants to raise rates in order to have room for monetary policy in the next downturn. That's a medium-term goal, though.

One more thing, we don't actually know what "full employment" means. Back in the 1960s, we thought 2% unemployment was that. In the 1990s, we thought 4% was. In Germany, today, we think 5% is, in France 8% or so. Our problem is that the underlying structure of the labour markets changes that definition. The only way we really know is what is the rate of unemployment at which inflation arises? Which isn't very useful when we're trying to work out what rate of unemployment at which inflation *might* arrive.

There is thus a definite intellectual push (P. Krugman certainly used to advocate this) to let it all run and see just how low unemployment does go before the inflation arrives. I tend to that view too.

But, as we can see, there are several things being juggled over interest rate calls. Along with the short-term vagaries of growth, there are those desired moves upwards over future policy room, then also lower to answer that what the heck is full employment question? Desiring, for different reasons, the same rate to both go up and down at the same time does leave us with a logical problem.

I'd like to see this expansion left to run, to see whether the changes to the labour market have substantially lowered the full employment rate. But that's more political than about investment.

In this short term, that the inflation just isn't arriving, even as the unemployment rate hits 3.5%, means the Fed has more policy room on the downside. They can cut rates if they wish to deal with any transient slowing of the economy.

The thing we're all waiting for here is whether the Fed is going to cut rates by another 0.25% this month. Previously, Moody's Analytics, for example, was offering 60% odds of it happening before the cycle turned, thus a return to rising rates. This low PPI leads them to think that odds have risen:

Producer prices for final demand fell in September, leaving us a bit more comfortable with our forecast that the Fed will cut interest rates by 25 basis points later this month, bringing the cumulative mid-cycle adjustment to 75 basis points. An additional rate cut may seem odd given the unemployment rate is at 3.5%, the lowest since the 1960s. However, low unemployment hasn't generated as much inflationary pressures as in the past; the Phillips curve is flat as a pancake. Given the downside risks to the outlook for growth from the trade tensions and slowing global economy, the Fed will cut interest rates as a prudent risk management approach.

I think that's likely. We're now much closer to certainty that the Fed will lower rates again this month. So, plan on this coming rate cut.

Tim Worstall
4.26K Followers
Author of Bears and Resources
A place to find gems and meet new friends
Tim Worstall is a wholesaler of rare earth metals and one of the global experts in the metal scandium. He is also a Fellow at the Adam Smith Inst in London and an writer for a number of media outlets, including The Times (London), Telegraph, The Register and even, very occasionally indeed, for the WSJ. This account is linked with that of Mohamad Machine-Chian: https://seekingalpha.com/user/52914142/comments
Follow