Uranium is currently trading below its cost of production.

Fission Uranium Chairman and CEO Dev Randhawa states that “we need 195 million pounds, but we produce 130 to 140 million pounds”.

Fortunately Louis James of Independent Speculator was kind enough to join me on the show and dig into these topics further.

I’m guessing you’d be hard-pressed to find many folks on Wall Street who know that uranium is currently trading below its cost of production.

So while the market has been sitting below the cost of production for some time now, and it’s unclear exactly when these dynamics will change, for long-term investors it’s one of the best risk-reward profiles currently available. Because unless we stop using electricity as a civilization, prices are simply going to have to rise at some point.

In fact, the dynamics are actually similar to what preceded the spike to a price of $140 per pound back in 2007. And the longer the imbalance goes unresolved, the more likely the correction is going to be of a sharp nature. 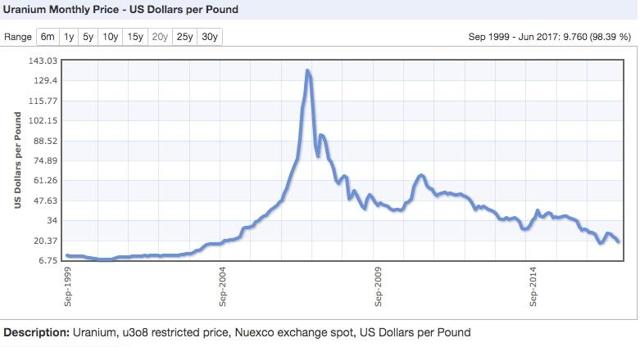 Fission Uranium Chairman and CEO Dev Randhawa states that “we need 195 million pounds, but we produce 130 to 140 million pounds.” So in addition to the price trading below the cost of production, and even further below the price that would incentivize new projects to go online, you also have a deficit in the market. So you can imagine where this is headed.

Fortunately Louis was kind enough to join me on the show and dig into these topics further. As the more I’ve learned about the uranium market the more I’ve wanted to explore.

So if buying assets below the cost of production in a market that’s already in a deficit is the kind of investment you like, click to watch the interview and discover what’s been going on!

Disclosure: I am/we are long SILVER AND SILVER EQUITIES. I wrote this article myself, and it expresses my own opinions. I am not receiving compensation for it. I have no business relationship with any company whose stock is mentioned in this article.

Follow ArcadiaEconomics and get email alerts
+
Add a comment
Disagree with this article? Submit your own.
To report a factual error in this article, click here.
Your feedback matters to us!