The reason I talk to myself is because I’m the only one whose answers I accept.”

The trading week ended on an up note Friday, with all the major indices posting gains well north of one percent on the day. What appears to be significant progress between the U.S. and China around trade was the main trigger for the rally. Increasing hopes that a Brexit deal might be worked out was another positive for investors.

While further details of a larger trade agreement between the largest two economies need to be worked out, along with an effective enforcement mechanism, the news help buoyed equities late this week.

Until the past few days, it had been another rocky start to stocks to begin the fourth quarter. So, what have insiders been buying in this uncertain market environment? Here are three names that caught our eye.

Let's start with a stock from one of the most beaten-down sector of the market so far in 2019. That is RV concern Camping World Holdings (CWH). Insiders certainly have not given up on this name. A beneficial owner added just over $5 million to his holdings from October 8th through October 10th. In July and August, he had increase his stake by just over $2.5 million, so he is upping his game evidently. In addition, the CFO bought nearly $300,000 of stock in mid-August. In the same week, a director also added $180,000 to his shares in the company. 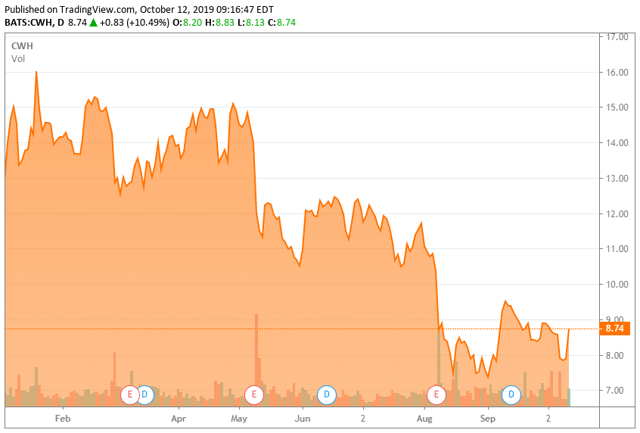 RV names really got a boost from the lowering of trade tensions on Friday. Thor Industries (THO) rose nearly five percent on the day, while Camping World Holdings was up more than 10% on the day. Despite the nice rise on Friday, the stock is approximately 40% lower than where it began the year. The company remains profitable and is very cheap on a price-to-sales basis. CWH is currently valued at approximately 15% of annual revenues. Based on recent purchases, insiders believe that is too cheap on a long-term basis.

Also popping up on the radar is Cardlytics (CDLX). This Atlanta-based firm provides proprietary native bank advertising channel that enables marketers to reach consumers through their trusted and frequently visited online and mobile banking channels. A beneficial owner added just over $4 million to his holdings in four transactions from October 7th through October 10th. The CFO opened October by purchasing $70,000 worth of shares on the second. 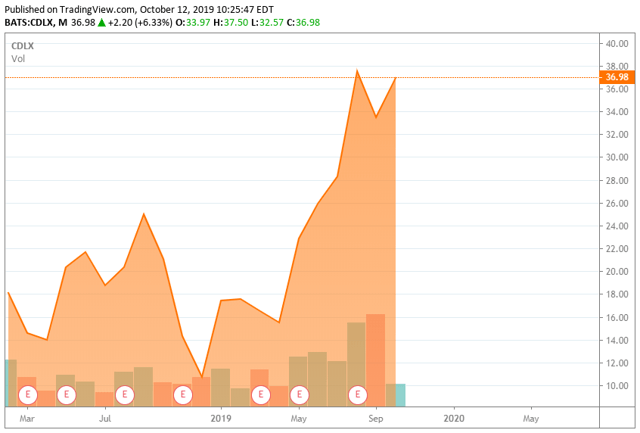 These are the first insider purchases in the firm since the company came public in February 2018. There have been scores of insider sales over that time frame. Cardlytics has been one of the better-performing IPOs over the past two years. The company recently completed a secondary offering of 1.5 million shares in early September, and about 80% of those shares came from existing shareholders.

Early in August, the company posted Q2 results that beat both top and bottom line expectations. Revenue came in at just under $49 million, which was up 37% from the same period a year ago. The firm currently has an approximate market cap of $850 million, valuing it at a tad more than four times its current revenue run rate.

Since the start of the third quarter, four analyst firms, including William Blair and J.P. Morgan, have reiterated or initiated Buy ratings on CDLX. Price targets proffered have ranged from $32 to $43 a share. KeyBanc seems the lone pessimist on the shares, as it downgraded the shares to a Hold on August 9th.

Finally, we have Five Prime Therapeutics (FPRX). A beneficial owner bought just over $2.2 million in new shares over nearly a dozen transactions from October 4th through the 8th. One has to go back to April 2016 to find any insider buying, and that was done when the shares were trading in the high $40s. 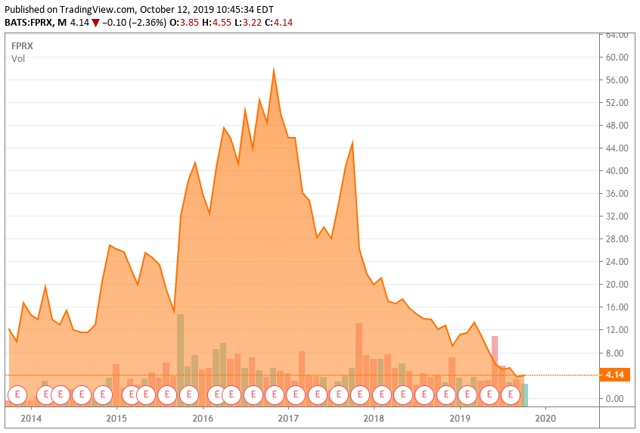 As can be seen from the chart above, Five Prime has seen a tremendous decline in the stock since it peaked late in 2016 (about six months after the last insider purchases within the stock). Not surprisingly, the company's CEO was replaced a few weeks ago. Five Prime also just announced a new round of layoffs.

Five Prime Therapeutics is a South San Francisco-based, clinical-stage biopharmaceutical concern focused on the development of protein therapeutics to fight a wide spectrum of cancers. The company has five clinical assets, of which two are out-licensed to Bristol-Myers Squibb (BMY). The shares trade at a discount to the current cash on the balance sheet. The market seems to believe the company is in a "death spiral", which is understandable given the recent news flow around Five Prime. One significant stakeholder seems to have a difference of opinion on where the stock goes from here based on recent purchases.

In individuals, insanity is rare; but in groups, parties, nations and epochs, it is the rule.”

Before the bell every Monday morning we provide an in-depth analysis on an undervalued small/midcap stock and outline a simple option strategy to make a tidy profit even if the underlying stock does little over the coming months. If you are not signed up yet for this free service, just click HERE to download our latest report. This action will also ensure you receive all future free reports as published as well.

The Insiders Forum's focus is on small and mid-cap stocks that insiders are buying. Some studies have shown that equities with heavy insider purchases outperform the overall market over time. The portfolio managed by Bret Jensen consists of 15-25 top stocks in different sectors of the market that not only are attractively valued but have had some significant insider purchases in recent months. Our goal is to outperform the Russell 2000 (the benchmark) over time.  Since its launch in the summer of 2016, the Insiders Forum's model portfolio has generated an overall return of 140.49% as of 07/28/2022.  This is more than double the 55.34% return from the Russell 2000 over that time frame.

Disclosure: I am/we are long CWH. I wrote this article myself, and it expresses my own opinions. I am not receiving compensation for it (other than from Seeking Alpha). I have no business relationship with any company whose stock is mentioned in this article.