I have written several articles about GoGold (OTCQX:GLGDF) recently, but it has been a while since I provided an updated valuation which highlights that the good exploration results at Los Ricos are not yet priced into the stock, despite the stock price increase from the bottom late last year.

This article covers an updated Net Asset Valuation of Parral. I will look at other balance sheet items and the costs associated with the acquisition of Los Ricos. Finally, I will look at the latest exploration results from the company.

Parral has recovered well from the drop in production we saw during last year and has had record quarter after record quarter recently. The most recent quarter produced 580,711 silver equivalent ounces. Costs for the quarter will not be available until the annual report is released in the second half of December based on previous year's release date.

Stacking should in the most recent quarter be more aligned with production, which will hopefully see costs go down some. The main reduction in cost is expected in Q2 2020 when the SART plant will be in place. Construction is on schedule and due to be completed by the end of the calendar year.

I have earlier estimated that adjusted AISC to come down to $11/oz, but I will use a slightly more conservative cost estimate for the below valuation with adjusted cash cost at $9/oz which GoGold was well below in Q4-18.

The below table reflects all the inputs into the valuation and a few of them require some further comments.

All numbers are discounted by 6.73% which reflects a 5% risk premia over the current U.S. 10-year yield. Both sales and costs for 2020 are based on the above estimates. Sales and costs in future years are assumed to increase by a 2% inflation rate. I have increased admin from $4M in earlier valuations to $4.8M as admin costs have increased over the last few quarters. The $2M in maintenance capex has earlier been communicated by GoGold. Note that the site restoration cost as of the most recent quarterly report is already discounted, so that is being deducted from the PV FCF row below rather than costs.

As indicated above, the NAV calculation requires a lot of assumptions which might turn out very differently over time but based on the above assumptions, Parral is valued to $82.5M. It is worth pointing out that Parral is assumed to carry all the administrative costs for GoGold. I do think there is a possibility of costs to come down some and there are additional tailings in the area which could extend the mine life with a couple of years as mentioned in the most recent update.

The above Parral NAV calculation does not include taxes. GoGold presently has a deficit of $78.2M where a significant portion comes from a write-down of Parral during 2018. So taxes are assumed to be offset by the deficit and future amortization & depletion.

Apart from the site restoration $1.3M which is already included in the Parral NAV valuation, GoGold only has $5.9M in total liabilities.

Metal prices during the quarter averaged $1,474/oz for gold and $16.97/oz for silver. If sales were equivalent to production and assumed to match average metal prices, we are looking at about $9.8M in sales for the quarter. Unless there are any big surprises on the cost side, I would expect the balance sheet in Q4 to look very similar to Q3. Note that I will discuss the Los Ricos acquisition separately where additional liabilities are expected to turn up on the balance sheet.

If we disregard marketable securities, inventories, property, plant, and equipment; we have $15.8M in assets. The number of Metalla shares has gone down, but they don't seem to be listed in the quarterly report. My estimate puts the number of shares at 7.2M as of Q3, given the stock price and USD/CAD at the time of the report. 7.2M shares in Metalla with the most recent stock price of $1.04 give us a market value of $7.5M. 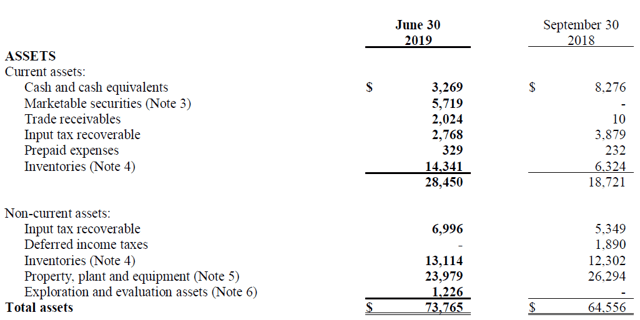 Adding back the value of the Metalla shares with the current valuation and deducting liabilities; the balance sheet gives us around $17.4M in net asset value. That value does not include inventories, property, plant, and equipment which are all assumed to be part of the value for Parral and Los Ricos.

Since the last quarterly report, the company acquired Los Ricos, effectively accelerating the purchase and eliminating any royalty streams. For the amount paid, this sounds like a good deal. The sellers will still have upside participation as a portion was paid in shares.

GoGold will pay a relatively low amount of $0.5M in cash up front, but the total amount for the property and royalty is $4.7M in cash and 13.3M GoGold shares to be paid over the next 2-3 years.

The most recent stock price for GoGold was $0.47 which is also in line with CAD$0.62 given the most recent fx rate. As of Q3, there were 171.9M shares outstanding, 4.2M options with a dilutive exercise price, and 2M deferred share units. Together with the shares used for Los Ricos, we get a market cap of $90.2M.

Given the sections discussed above, I get a valuation of $95.2M even without considering Los Ricos, 5.5% above a diluted market cap.

Los Ricos is a very large area with many different potential projects, but I will be focusing on the areas where exploration drilling is ongoing. Los Ricos is very attractive for several reasons.

The various areas can be viewed on the home page, but the below picture highlights the areas of the current drill program with the main results are primarily at El Abra, but there are also some drill results of San Juan most recently and Cerro Colorado where there are fewer historical drill results. 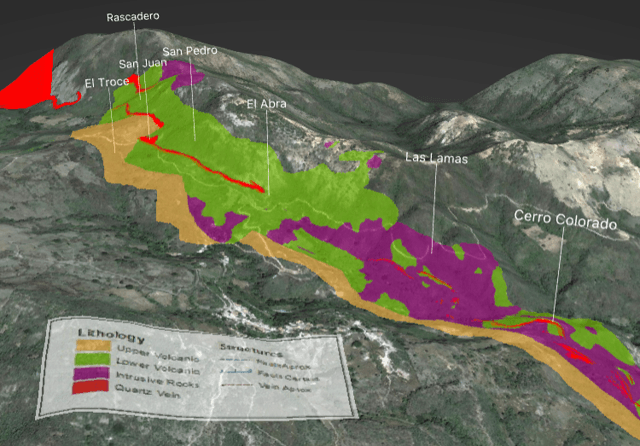 The below two charts look at the main drilling area, where we see some drill results at a greater depth, but most drill holes are relatively near the surface. The second graph indicates the very attractive length and grade, where the grade is above 1 g/t for most drill holes, which is likely due to the historical drill results to guide current exploration.

The next set of charts looks at the new areas; San Juan and Cerro Colorado. The grades and lengths aren't quite as impressive as the main area, but still relatively good. The depth at Cerro Colorado is naturally very positive.

The historical drill results have mostly clustered closer to El Abra and the existing mine. The planned drill holes are now up towards San Juan as highlighted by the purple holes in the below chart. It will likely take some time to get the scope of that area due to fewer historical results which can guide drilling. The black holes are current drill holes and grey historical ones. 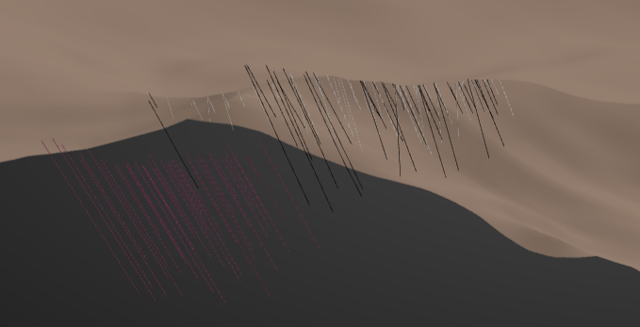 I can't estimate the value of Los Ricos with any confidence, whether it is $100M or $1,000M, and things can always take a turn for the worse with exploration projects. However, I do think it is fair to say GoGold is still undervalued and very underappreciated by the market given current metal prices, Parral's production results, GoGold's balance sheet and the exploration results so far.

The stock can certainly stay underappreciated for some time even though I doubt it would last longer than the preliminary economic assessment of the main drill area, expected in March of 2020. I am long GoGold, have not taken any profits, and would consider adding to my position on any significant pullbacks.

Bang For The Buck
3.39K Followers
Author of Off The Beaten Path
A cyclical value approach, presently focused on natural resources

I am always happy to respond to comments and questions in my articles during the first few days. More in-depth and ongoing discussions are had inside Off The Beaten Path.

Disclosure: I am/we are long GLGDF. I wrote this article myself, and it expresses my own opinions. I am not receiving compensation for it (other than from Seeking Alpha). I have no business relationship with any company whose stock is mentioned in this article.

Additional disclosure: I am long GoGold (GGD) on TSX.