2019 was not kind to Retrophin (RTRX). The company made little progress on the commercial front, though it got the new version of Thiola approved by the FDA, and that’s about it on the good news front. On the negative side, the company decided to pass on the opportunity to acquire Censa Pharmaceuticals and its CNSA-001 program after seeing the phase 2 results and fosmetpantotenate failed in the phase 3 study in PKAN patients. I closed my position in Retrophin earlier this year as I had no conviction in the PKAN program and as management was giving the market a between-the-lines message that it is going to pass on CNSA-001, which I considered a potentially important asset for the company in the following years and a potential catalyst this year. The company also started to burn more cash in the last two quarters, thus reducing its net cash position and the ability to expand its pipeline through M&A. Overall, I remain bullish on Retrophin’s long-term prospects, but less so than before since the upside is mostly based on sparsentan now, and there are no clinical trial readouts for sparsentan until at least 1H 2021.

There is not much to say about the two pipeline failures. Based on Retrophin’s press release, fosmetpantotenate was a clear failure and there is nothing to salvage there. And regarding CNSA-001, we only know that Retrophin gave up on the asset but don’t know whether it failed or succeeded in the proof of concept study. We do know that even if the study was a success, the results didn’t impress Retrophin’s management team.

I had little confidence in fosmetpantotenate since meaningful clinical data were lacking to support a positive outcome and I thought this program is not very valuable to Retrophin given the size of the patient population. I liked CNSA-001 though and thought it had a good chance to succeed in the phase 2 study.

As mentioned in the introduction, I decided to close my position in Retrophin ahead of these two key readouts since management was giving us a between-the-lines signal it was going to give up on CNSA-001 (at least that was my impression based on its comments on earnings calls) and because of the just-mentioned lack of confidence in fosmetpantotenate. This proved to be the right decision but let’s focus on the future, not the past.

Up until the first half of 2018, Retrophin’s commercial portfolio was delivering double-digit revenue growth but the growth slowed down significantly in the next four quarters when Y/Y revenue growth was in the 0.9% to 6.5% range. 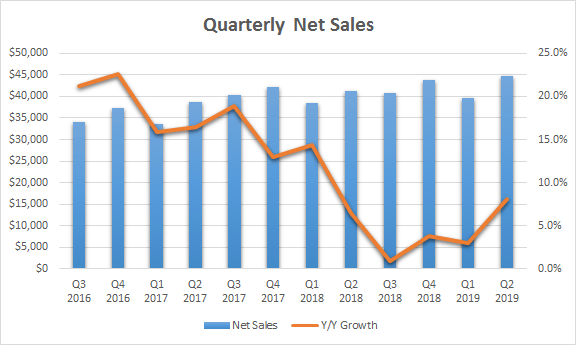 However, the situation improved in the second quarter of 2019 and may additionally improve in the following quarters due to the FDA approval of a new formulation of Thiola. The new formulation is available in doses of 100mg and 300mg (versus 100mg of the old version), it is taste-masked (the old version isn’t) and can be taken with or without food (the old version is to be taken at least one hour before a meal or at least two hours after a meal). The changes should increase convenience and compliance for existing patients on therapy and, perhaps, result in patients who abandoned the drug getting back on therapy.

But overall, I don’t expect the new formulation of Thiola or the other two approved products to be a meaningful upside driver for Retrophin’s valuation.

Aside from slow growth of the marketed portfolio, two of the three products don’t have patent exclusivity, though it’s probably better to say two out of four – the old version of Thiola and Chenodal have no IP protection and a generic manufacturer could potentially launch its own version of the product. I assume the new formulation of Thiola will have some patent protection, but it may still face pricing pressure if generic manufacturers launch a generic old version. Cholbam has orphan drug exclusivity through 2022, but I assume this is the smallest revenue contributor in Retrophin's portfolio - Retrophin reports combined revenues for bile acid products (Cholbam and Chenodal).

The approved portfolio could almost justify the current valuation as I believe it is worth around $10 per share (valuation available to subscribers), though that’s assuming neither of the two products is challenged by generics.

Sparsentan is now Retrophin’s main asset, and perhaps the only asset with meaningful value creation potential in the next few years. Sparsentan is being studied in two phase 3 trials in large orphan indications – FSGS and IgA nephropathy (‘IgAN’).

I believe FSGS indication is sufficiently de-risked based on the solid phase 2 results while it also has a decent shot at success in IgAN since reducing proteinuria is the common goal in both indications, though Retrophin did not do any proof of concept studies in IgAN. As such, I would value sparsentan in its current state only in FSGS and would assign approximately $13 per share to this indication based on $500 million in annual sales in mid/late 2020s and no value to IgAN as there is no clinical evidence to support assigning value to this indication.

The problem with sparsentan is that there are no near-term catalysts on the horizon. The company pushed out the interim phase 3 readout in FSGS from 2H 2020 to 1H 2021 and the results from the IgAN study are expected in 1H 2022. This leaves us with a catalyst-less 18 months or so, or longer if enrollment is behind the revised schedule.

The second path to value creation is M&A, but that was part of my thesis the last 2.5 years (see initiation article) and the company has not created any value in those 2.5 years and has destroyed a bit of value (by burning cash) - CNSA-001 was the only M&A effort over the mentioned period and it only brought costs to the company. M&A remains a potential long-term value driver for the company, but I am not as enthusiastic about this value driver as I was in the past.

Part of the reason (other than the lack of execution/value creation through M&A over the last few years) is the fact Retrophin’s balance sheet has weakened. From a cash flow breakeven position, Retrophin has shifted to burning $20-25 million a quarter in the first half of 2019. The cash position dropped from $471 million at the end of 2018 to $425 million at the end of Q2 2019 and the company has $276 million in outstanding 2025 convertible notes. The significant cash burn no longer provides a basis to include the net cash balance in the valuation as I did previously, especially considering the fact the conversion price for the notes ($38.80) is too far from the current share price.

It's also worth noting that Retrophin has two preclinical programs (NGLY1 deficiency and Alagille syndrome), but those are far from creating value and there is limited information on either.

I remain bullish on Retrophin’s long-term prospects, but less so than I was a year ago. Pipeline failures and the shift from cash flow breakeven to cash burn mode have made the company less appealing and the company is now less likely to do meaningful M&A. But there is still significant value creation potential in the long-run through sparsentan in FSGS and/or IgAN and potentially through M&A as the company’s balance sheet remains solid and with some excess capacity despite the increased cash burn.

The lack of meaningful catalysts is a problem in the near term and, on the risk side, aside from sparsentan’s risk of failure in FSGS and IgAN phase 3 trials, a good part of the marketed portfolio is vulnerable to launches of their respective generic versions - this would put a serious dent in Retrophin's net sales and would also increase the cash burn.

I value the stock close to mid-$20s with potential for long-term upside revisions based on sparsentan's de-risking in FSGS and/or IgAN (which I didn’t include in my valuation) and potential downside revisions for the marketed portfolio if generic versions of Thiola and/or Chenodal are launched in the following years.

I publish my best ideas and top coverage on the Growth Stock Forum. If you're interested in finding great growth stocks, with a focus on biotech, consider signing up. We focus on attractive risk/reward situations and track each of our portfolio and watchlist stocks closely. To receive e-mail notifications for my public articles and blogs, please click the "follow" button. And to go deeper, sign up for a free trial to Growth Stock Forum.