There has been considerable amount of rumor mongering going on for the last several weeks that TSMC (NYSE:TSM) 7nm lead times are stretching and this is a problem to Advanced Micro Devices (NASDAQ:AMD) 7nm product ramp.

Firstly, note that AMD has been countering these rumors whenever they raise. CEO Lisa Su herself has set the expectation at 7nm launch that capacity is not a problem. According to AnandTech interview of Lisa Su:

“We have a great relationship with TSMC, and I would say that our ramp for 7nm has been one of the smoothest ramps we’ve had over a number of different products. We have plenty of capacity.”

Secondly, as the fear, uncertainty, and doubt increases, AMD has been taking along TSMC representatives with them to address these capacity concerns. According to report from a recent conference:

“At the European summit, TSMC also sent people to attend the meeting, emphasizing the importance of cooperation with AMD to ensure that the 7nm processor has sufficient supply.”

Thirdly, and most importantly, it makes no strategic sense for TSMC to starve AMD.

Historically, TSMC has grown its business faster than semiconductor industry growth rates. Due to decades of success, TSMC now commands nearly half of the entire fabless silicon market as can be seem from the image below from TrendForce. 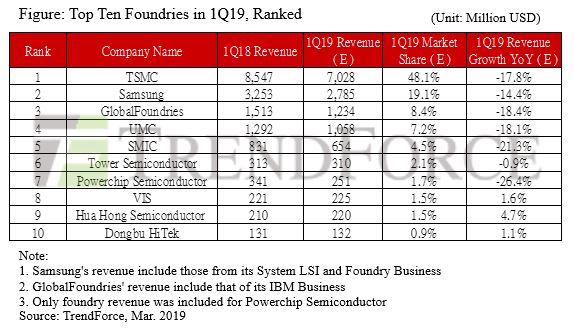 Needless to say, TSMC’s above market growth has occurred at the expense of other players in the industry. However, we have now come to a stage where the other players are too nich-y and TSMC could use the help of new markets to tap into to continue its market share trajectory.

The PC market present one such juicy opportunity. TSMC, not surprisingly, is now going aggressively after the PC TAM. The key players in the PC space are Intel (INTC), Nvidia (NVDA) and AMD. Of these three players, Intel mainly produces from its own fabs although it does use third parties selectively for smaller opportunities. AMD and Nvidia, on the other hand, do not have their own fabs and use TSMC as one of their fabs. TSMC’s strategy here would be to increasingly become the primary, or only supplier for AMD and Nvidia.

As TSMC continues to pull away from other fabs in terms of leading-edge technology, these companies have no real options. For example, at 7nm, TSMC has been in production for nearly two years but Samsung, the second biggest player, has yet to enter production. Given this dynamic, TSMC is increasingly becoming the only viable alternative for AMD and Nvidia.

For TSMC to grow rapidly, it not only needs to attract business from AMD and Nvidia but it would also need them to be successful. Strategically, AMD and Nvidia are not the customers that Nvidia would want to starve. Even when the capacity is tight, it is safe to say that TSMC is going to go the extra mile to take care of these key customers.

Between these two customers, AMD is likely more critical to TSMC as any market share gains by AMD x86 business are market share gain from Intel and thus the PC TAM. On the other hand, the gain or loss of GPU share by Nvidia or AMD may not make much difference to TSMC in terms of served available market.

As such, we predict that TSMC will grow its market share from the current 48% to about 70% in the next 5 years and much of that will come from AMD taking market share from Intel. Without strong support for AMD, TSMC’s growth path is considerably reduced. Given this dynamic, it makes very little sense for TSMC to starve AMD.

So, next time someone says AMD will not have fab capacity at TSMC. Don’t believe it. TSMC will bend over backwards to give as much capacity to AMD as is possible.

Subscribers to Beyond The Hype have access to all the linked articles that may otherwise be inaccessible. For timely, cutting-edge insights, analysis and investing ideas in technology, semiconductor, solar, battery, autonomous vehicles, and other emerging technology stocks, check out Beyond the Hype. This Marketplace service gives you early access to my best investing ideas, along with event driven and arbitrage opportunities when they are most edgy and actionable.

EnerTuition
10.04K Followers
Author of Beyond The Hype
Where emerging technology and truth converge.

Disclosure: I am/we are long AMD, TSM. I wrote this article myself, and it expresses my own opinions. I am not receiving compensation for it (other than from Seeking Alpha). I have no business relationship with any company whose stock is mentioned in this article.

Any positions disclosed by the Author are part of a diversified portfolio. Author considers lack of diversification to be one of the gravest errors made by many investors.
Shorting is a sophisticated investment strategy that requires superior investment skills and must be avoided by all but experienced investors with the appropriate skill and wherewithal.