Since 2013 National CineMedia, Inc. (NASDAQ:NCMI) has essentially had no revenue growth, flat gross profit margins, rising operating expenses, an increased investment in working capital, and rising spending on capital projects. Only partially offsetting these bad cash flow trends is the significant cash inflow that the company has gotten from rising accrued expenses, unearned income, and accrued distributions. Flat free cash flow (as a percentage of revenue) and a dividend cut in 2018 have been the result. Not surprisingly, the share price has also been flat, declining from the $8.80 closing price (adjusted for dividends) on January 2, 2013 to the recent price of about $8.

However, recent events may signal the beginning of a transformation of National CineMedia (aka NCM) into a dividend paying growth company that fits into the portfolios of income and non-income investors alike. On August 2nd the company named a new CEO, Tom Lesinski, and on September 17th it executed amendments to the Exhibitor Service Agreement (ESA) with two founding members.

NCM exclusively manages and owns 48.6% of National CineMedia, LLC. (“NCML”) which operates the largest cinema advertising network in North America. The other owners of NCML (the “founding members”) are subsidiaries of Cinemark (25.0% ownership), Regal (26.3%), and AMC (0.1%). NCM sells advertising throughout its cinema advertising network according to Exhibitor Service Agreements (“ESA”) between the founding members and NCML. They also sell advertising to certain third party theater circuits under long-term network affiliate agreements.

Tom Lesinski was added to NCM’s Board of Directors in December of 2014 as an independent director. Subsequently in August of 2018 he was named Chairman and on August 2, 2019 he became CEO and stepped down as Chairman of the board.

With this broad leadership experience Mr. Lesinski is well positioned to head a company which bills itself as the “connector between brands and movie audiences.” In the announcement of his appointment as CEO, Mr. Lesinski gave a hint of the vision he has for the company. He stated that NCM is able to,

reach and engage hundreds of millions of moviegoers a year. These are young, cord-cutting audiences that are hard to find on traditional TV or other premium video platforms, which makes having access to them especially valuable to brands.”

At an October 3, 2019 industry conference he described NCM’s advertising as “a super premium priced piece of inventory” that is exceeded only by ads at the Academy Awards, the Super Bowl, and some live television events. He also disclosed that the company’s core demographic age is 31 years old compared to 47 for cable TV and 58 years old for network TV.

From these comments, and others surrounding the company’s digital advertising, I glean that his strategy will be to target the so called “millennials” that advertisers crave for their demographic potential and because they are hard to reach through traditional advertising. So not only is cinema advertising sold at a premium, more effective targeting of millenials will enhance its premium status. Mr. Lesinski and the management team will reveal more concrete aspects of its strategy at his first earnings conference call early next month.

Just more than a month after Mr. Lesinski’s hiring as CEO, NCM’s strategy was dramatically altered by the signing of amendments to the ESA with Cinemark and Regal which the CEO called,

The most significant strategic announcement the company has made since it was founded in 2003.”

The new agreements (the ESA with AMC remains in discussions) have several components which NCM believes will improve its growth and cash generation. 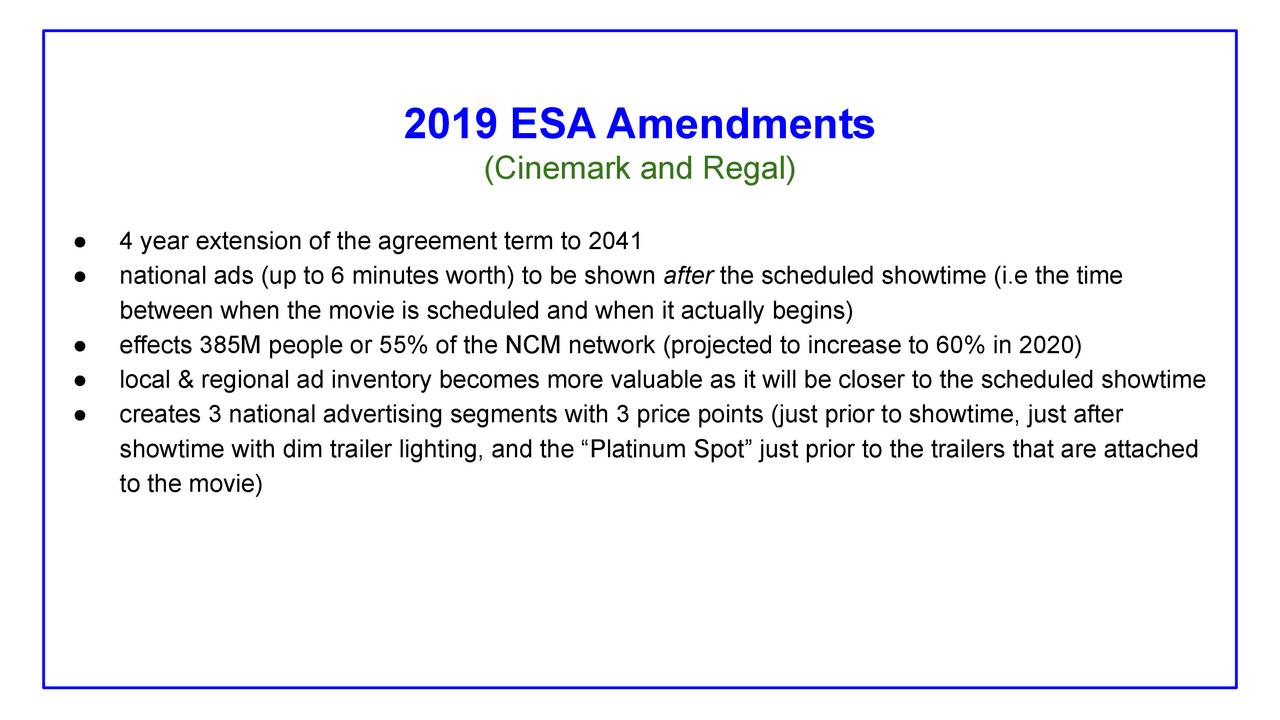 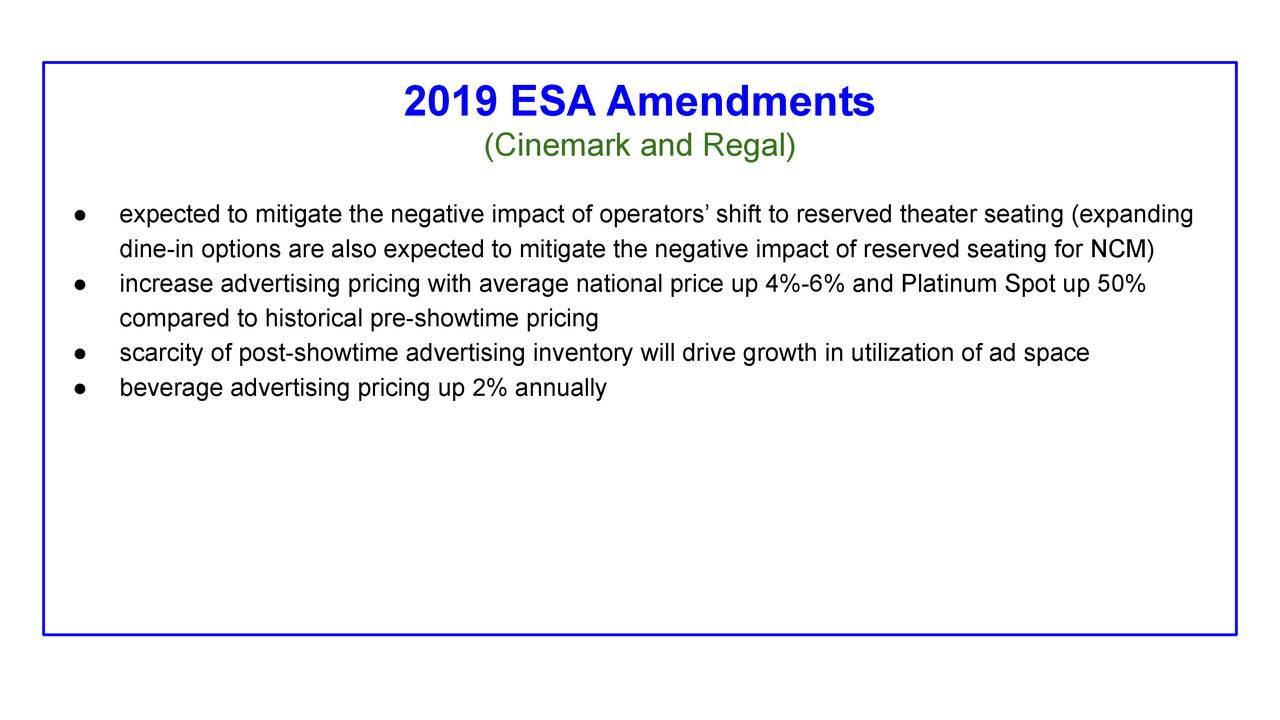 These benefits to NCM are projected to outweigh the added expense from the new ESA. Specifically, incremental theater access fees are to be paid to the theater operators as follows:

When the ESA Amendments were announced the company provided limited guidance on company revenue, expenses, and cash flow which it will more fully disclose in future calls with analysts.

However, an index to an announcement of the refinancing of $400M of debt was filed in October with the SEC which highlighted potential difficulties and uncertainties that may impair the full realization of the anticipated benefits of the new ESA.

NCM warns that the behavior of theater patrons may change, resulting in a reduction to the number of patrons that are in a theater seat to view the pre-showtime ads. Secondly, potential advertisers may not consider the Platinum Spot or Post-Showtime Inventory as a premium advertising opportunity. Relatedly, NCM may not satisfy the minimum average ad pricing which is required by the 2019 ESA Amendments. Also, the new arrangement of post show-time ads may decrease the average pricing for ads appearing before the posted showtime. Lastly, NCM warns that the increased theater access fees and revenue share payments to Cinemark and Regal may exceed the increase, if any, in average ad pricing.

Based on the available information about the new arrangements, NCM is pursuing a strategy which may optimize the value of its most desired advertising space (the Platinum Spot) at the actual cost of increased fees to theater operators and potential costs of degrading lesser ad inventory and increased customer dissatisfaction (advertisers and movie-goers). The updates provided in early November are crucial to how the market may view the strategy change.

NCM has strictly been a dividend income investment since 2013 based on the weak share price and substantial dividend yield. The company has paid a dividend that has yielded about 7.7% on average since 2013 and currently pays an 8.5% dividend even after the cut to $0.68 from $0.88 in March 2018. Underlying this profile is the company’s lack of revenue growth, unchanged gross profit margins, decreasing operating profitability, slowing working capital cash cycle, and rising capex.

Revenue has grown only 1.7% annually since 2009, and more recently has contracted 0.9% annually since 2013 and 0.4% since 2015. The historical lack of growth is unsurprising given that the company has approximately 70% market share in a movie industry that faces many headwinds. The new ESA model is an attempt to boost revenue growth by increasing the value of the advertising being purchased which is naturally limited by time (only so many ads can play before the movie), market share (only so many new theaters remain to be added to the network), and the fixed financial relationships with the theater operators.

Even though NMC’s gross profit margin is seasonal with the movie business (Q4 is the strongest, Q1 is the weakest and Q2 and Q3 are average as they share the summer movie season), annual gross margin is steady at about 70%-71%. The TTM margin has slipped a bit to 69.6% with each of the last four quarters margin below the previous year’s corresponding quarter.

The cost of sales figure is comprised of theater access fees paid to founding members (~62%), advertising operating costs (~28%), and network costs (~10%). The relative overweighting of access fees in cost of sales suggest that because additional access fees will be paid under the new ESA, gross margin will be pressured going forward if the anticipated revenue growth does not materialize. Investors should closely monitor gross margin to assess the effectiveness of NCM’s strategy.

Operating expenses, which include selling, marketing, and administrative costs, is largely separate from the effects of the new ESA. Unfortunately, there has been a bad trend with operating expenses rising as a percentage of revenue to 27.6% for the TTM compared to just 20.1% in 2009, 22.1% in 2014, and 25.2% in 2016. Some of the recent trend is attributable to non-recurring items like personnel severance costs, CEO search expense, and litigation expense, but NCM does still need to better contain operating expenses as it begins to operate under the new ESA.

NCM has seen a significant slowing of its working capital cash cycle to 79 days in 2018 from 2014 when it stood at 55 days. The increase in accounts receivable to 130 days from 108 days accounted for the bulk of the deterioration. This growing investment in working capital is a drain on cash but NCM generates cash flow from the deferral of both ESA stipulated distributions to the founding members and theater access fees. Including these current liabilities improves the cash cycle to just 19 days in 2018 but the worsening trend remains as the adjusted cash cycle was negative 11 days in 2014 (the company’s working capital investment generated cash rather than consumed it). Without additional guidance from NCM the impact of the new ESA on working capital is not clear.

Like the other cash drivers, NCM’s capital requirements have been on an unfavorable rising trend. Since 2009 capex has averaged 2.7% of revenue but has exceeded that in each of the past four years as the company invests in digital technology. Like working capital, the impact of the new ESA on capital spending is not clear without additional guidance.

Despite my caution regarding NCM’s financial trends, the dividend yield is attractive enough (even after a substantial cut 18 months ago) to incentivize investors willing to hold shares while the new ESA strategy plays itself out. Another consideration is that the new ESA contains an optional termination provision whereby NCM may terminate the amendments to the ESA without penalty. Notice to terminate must be made by August 1, 2022 and the ESA will, on November 1, 2022 revert to the terms in effect immediately prior to the new 2019 amendments. This option has real value for NCM as it allows for a “redo” if the new arrangement proves to be detrimental. In my opinion this option should enhance an investor’s confidence if their investment is made with the intent to capture dividends while waiting for the strategy to unfold.

This “buy and see” approach is only for very aggressive investors as there is a real chance that price declines would negate (or worse) the dividend yield if NCM is not able to execute its plan.