The spread between the FFO multiples of large cap REITs (22.2x) and small cap REITs (13.5x) narrowed slightly in September as multiples rose an average of 0.3 turns for small caps and only 0.1 turns for large caps. In this monthly publication, I will provide REIT data on numerous metrics to help readers identify which property types and individual securities currently offer the best opportunities to achieve their investment goals. 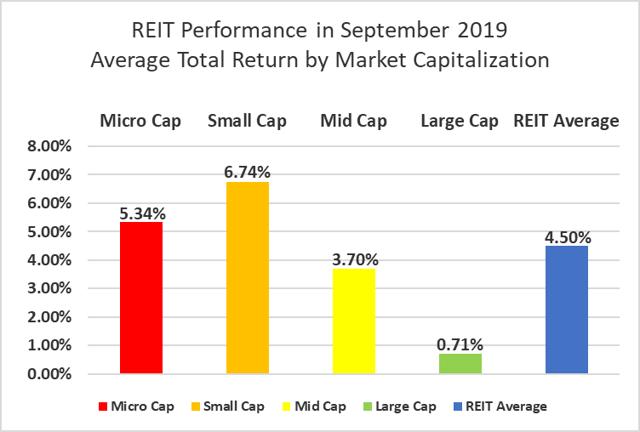 In September, REIT performance and market cap had a negative correlation. Although REITs of all sizes had positive returns, large cap REITs (+0.71%) significantly underperformed their small peers. Small cap REITs led with a stellar 6.74% average return in September, followed by a strong 5.34% return by micro caps. This disparity of September performance was enough for micro cap REITs (+34.58%) to overtake large cap REITs (+31.07%) as the top performers year to date. Mid cap REITs underperformed in September (+3.7%) and remain behind their peers year to date (+23.44% vs. 26.88%). 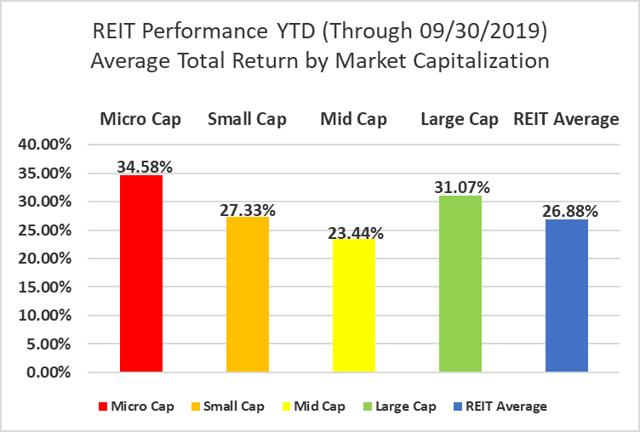 90% of REIT property types averaged a positive total return in September, with a 19.94% total return spread between the best and worst-performing property types. Malls (+17.89%) and Shopping Centers (+9.84%) had the best average returns. Malls were led by the double-digit positive returns of CBL Properties (CBL) with +55.42%, Washington Prime Group (WPG) with +29.37%, Pennsylvania REIT (PEI) with 10.64% and Macerich (MAC) with +10.61%. September marked a very sharp reversal in sentiment for retail REITs, which have underperformed in recent years due to an elevated number of tenant bankruptcies as well as the incessant media narrative of a “retail apocalypse.” Infrastructure (-2.06%) and Self-Storage (-0.12%) were the only property types in the red in September. 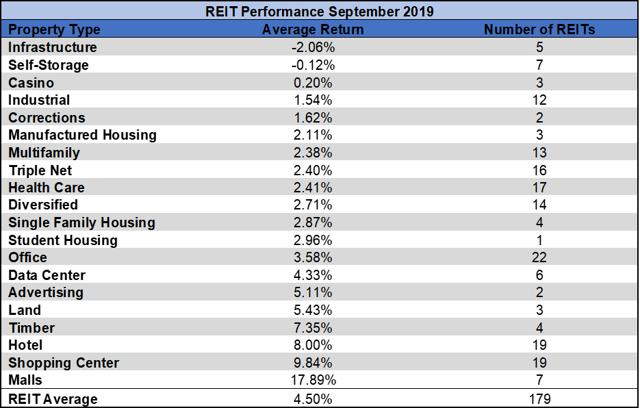 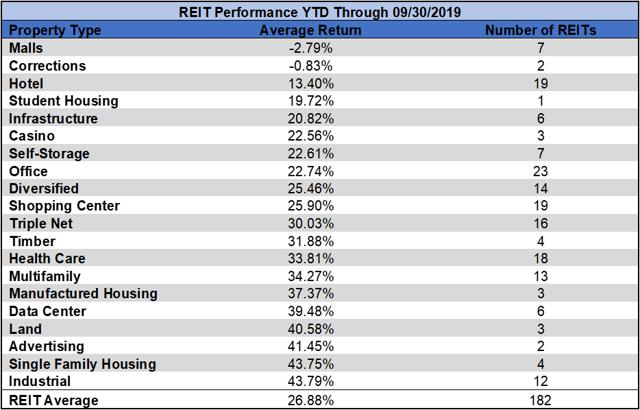 The REIT sector as a whole saw the average P/FFO (2019) increase yet again during September (from 16x up to 16.4x). After the first three quarters of 2019, REITs now trade 3.3 turns above the 13.1x average FFO multiple at which they began the year. During September, the average FFO multiples rose for 75% of property types and fell for 25%. Single Family Housing began the month trading at the highest average multiple and saw further multiple expansion yet again during September (from 28.3x to 29.2x). After a September rally in Mall REITs, Corrections now trades at a lower FFO multiple (7.5x) than any other property type, despite ending a 3-month streak of multiple contraction thanks to modest multiple expansion in September (from 7.4x to 7.5x). 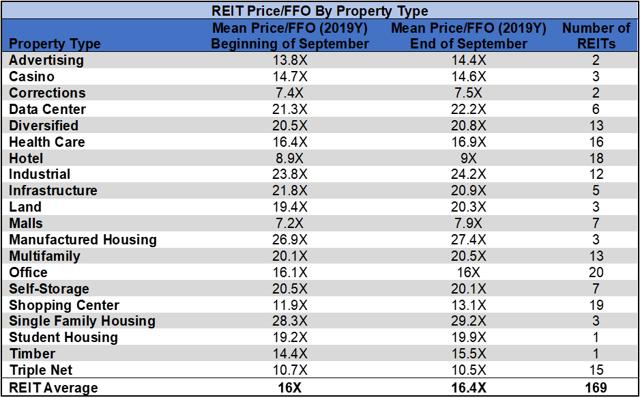 CBL & Associates Properties, (CBL) outperformed all other REITs in September (+55.42%), driven by the investment of activist investor Michael Ashner, who has taken a 5.97% stake in the common shares. A recent filing reveals that his firms accumulated 10.35 million common shares at prices ranging from $0.80-$1.16 between June and August. Ashner is known for his activist investments in distressed commercial properties and in debt restructuring. He has a history of lobbying owners/management to sell off properties. In an interview with the Wall Street Journal, he would not reveal exactly how he wants to reposition CBL’s assets, but he did clarify that he was not seeking a sale of the entire company. He stated that “CBL has a long runway to transform the properties for the 21st-century consumer. We are seriously hopeful that we can work together with management to exploit all opportunities for shareholders that we see here.”

Even after the significant price appreciation in September, CBL still trades at a shocking low multiple of 0.98x 2019 FFO/share. At less than 1x FFO/share, CBL’s multiple is far lower than that of any other publicly traded REIT. If Ashner and CBL management are successful in transforming the company, there is the potential for tremendous returns. Even if the FFO multiple returned to a still very low 3x, it would triple investors’ money. Additionally, CBL has stated the intention to reinstate a small dividend, which may be announced as soon as the 4th quarter of 2019.

SBA Communications Corporation (SBAC) had the lowest total return (-9.3%) in September. In mid-September, Morgan Stanley downgraded SBAC from overweight to equal-weight and the share price steadily declined throughout the remainder of September. However, SBAC’s total return in 2019 remains strong at +48.96%.

80.45% of REITs had a positive return in September, with 93.41% in the black year to date. During the first three quarters of last year, the average REIT had only a +2.6% return, whereas this year the average REIT has already seen a total return more than 10x higher (+26.88%). 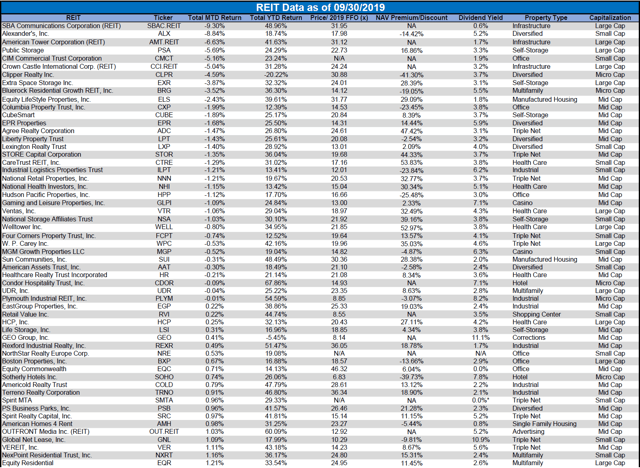 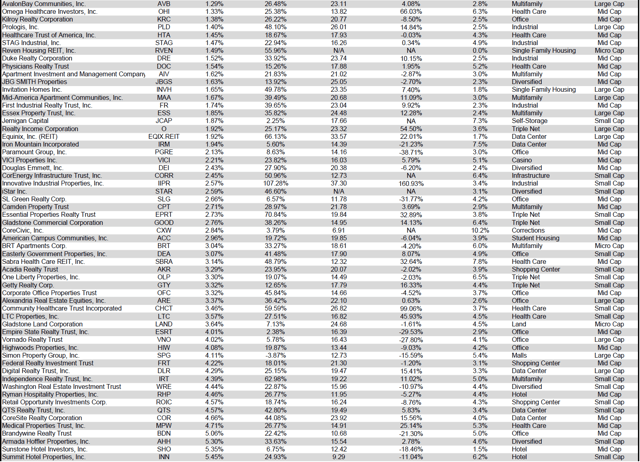 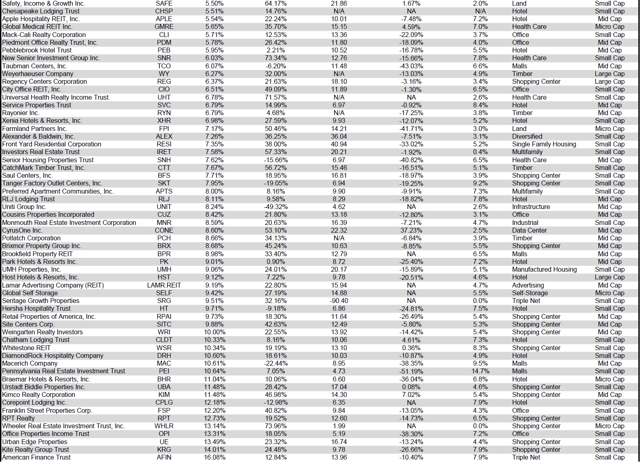 Dividend yield is an important component of a REIT's total return. The particularly high dividend yields of the REIT sector are, for many investors, the primary reason for investment in this sector. As many REITs are currently trading at share prices well below their NAV, yields are currently quite high for many REITs within the sector. Although a particularly high yield for a REIT may sometimes reflect a disproportionately high risk, there exist opportunities in some cases to capitalize on dividend yields that are sufficiently attractive to justify the underlying risks of the investment. I have included below a table ranking equity REITs from highest dividend yield (as of 9/30/2019) to lowest dividend yield. 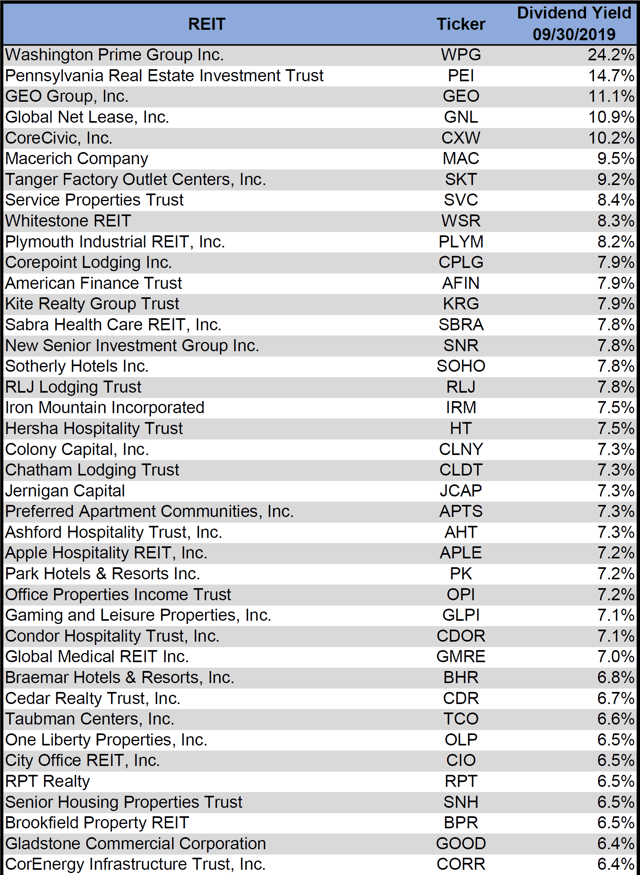 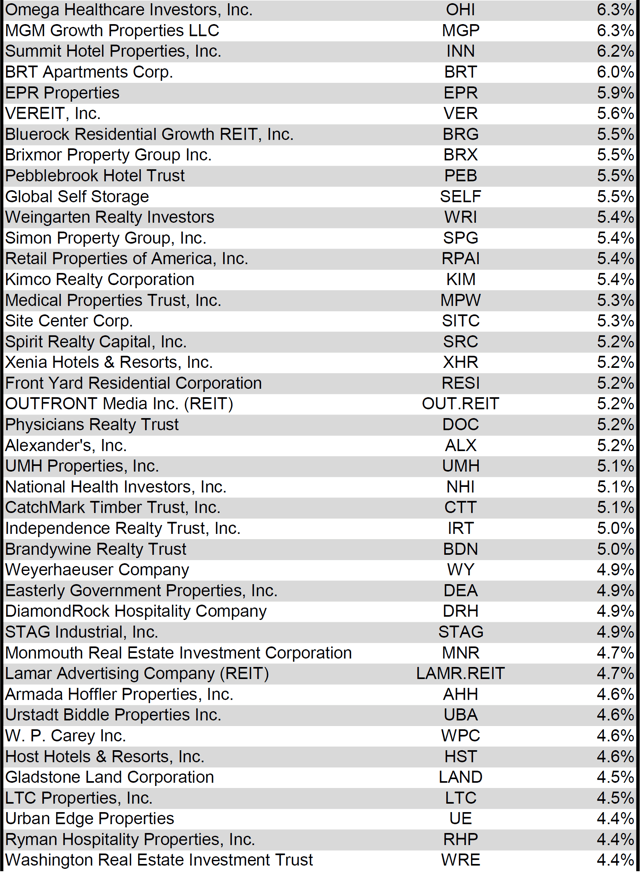 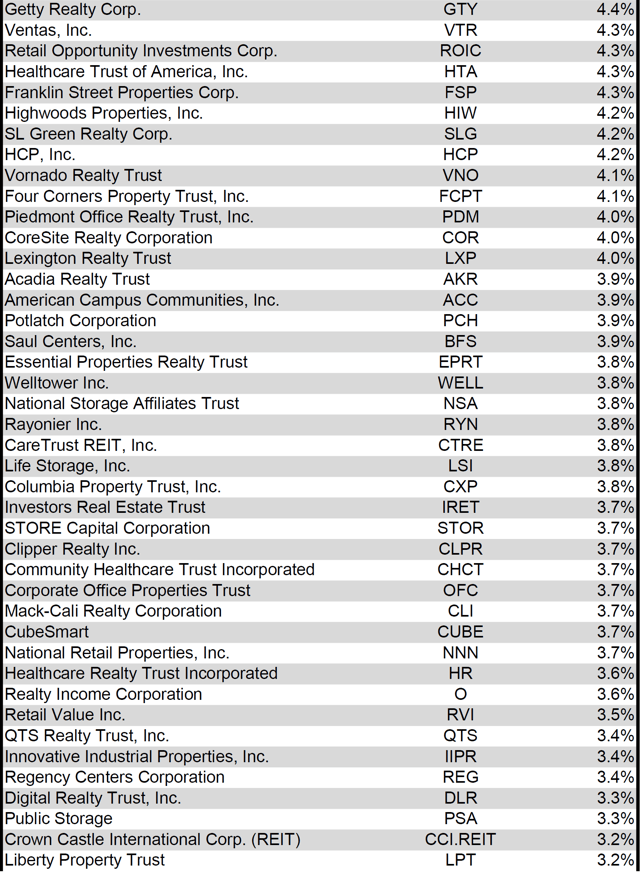 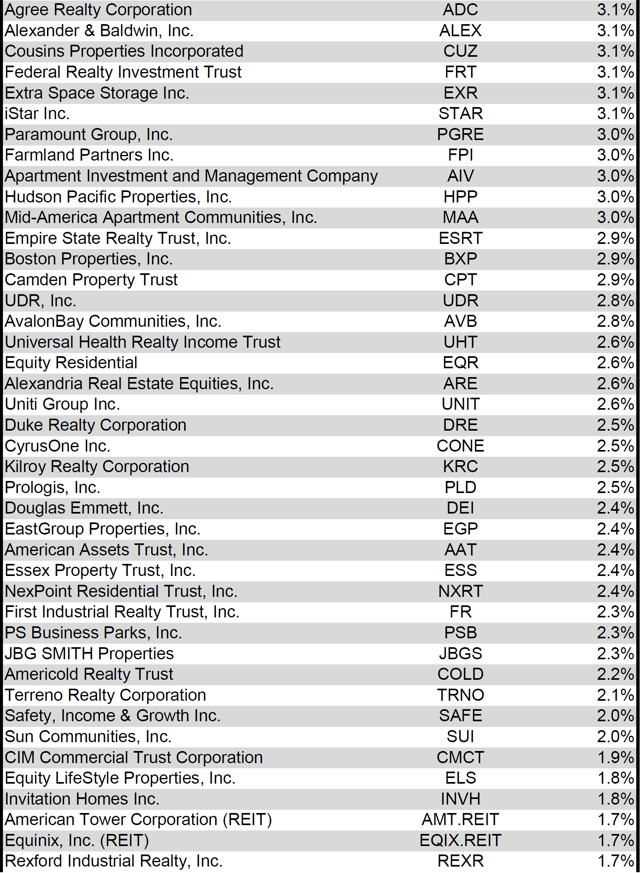 The REIT sector median discount to Net Asset Value narrowed sharply in September from 7.2% to 2.3%.

The median NAV premium of Health Care REITs rose yet again from 26% to 28.5% in September. The median NAV premium of Self Storage REITs narrowed sharply from 24.4% to 15.7%. Data Centers and Other Retail (for example: free-standing net lease retail) also now trade at a median premium of 15.7%. The share price of Community Healthcare Trust (CHCT) continues to rise further and further above its Net Asset Value. The premium in September grew from an already lofty 87.1% to 95.4% and remains at the largest NAV premium in the REIT sector.

Mall REITs’ median discount to consensus NAV narrowed from 40.8% to 38.9%, but Malls remain far more discounted than any other property type. 4 of the 10 most discounted REITs own and operate malls, with CBL at a larger discount than any other REIT. Even after an impressive 55.42% September return, CBL is still trading at a 64.9% discount. The other deeply discounted Mall REITs are Taubman Centers (TCO) at a 45.3% discount, Macerich (MAC) at a 40.1% discount and Pennsylvania REIT (PEI) at a 37.7% discount. 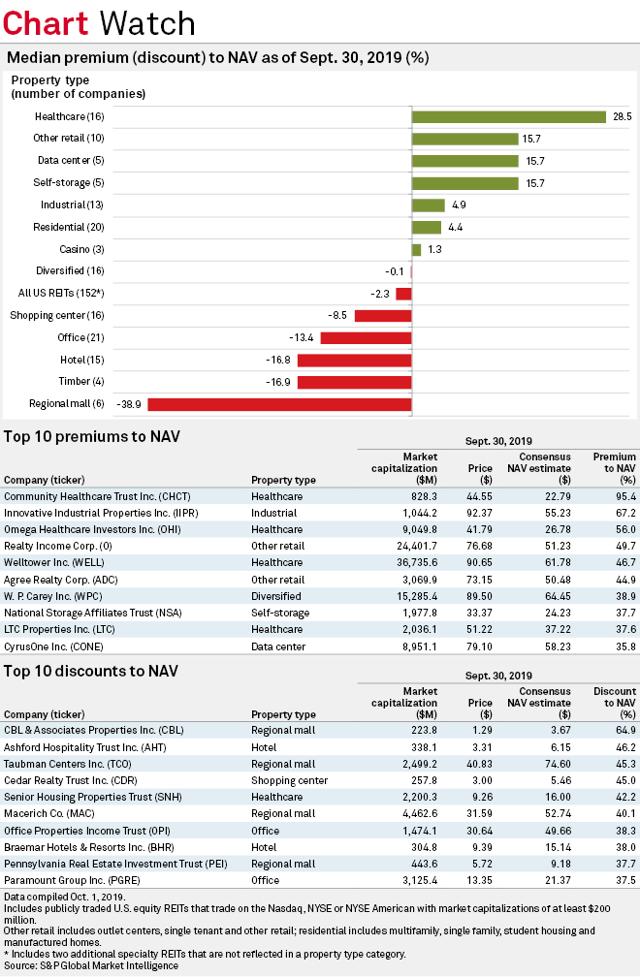 The large cap REIT premium (relative to small cap REITs) grew larger and larger throughout most of 2019, reaching a recent peak of 67.4% at the end of August before declining modestly in September. Even after the multiple gap narrowed in September, investors are still paying on average more than 64% more for each dollar of FFO/share to buy large cap REITs than small cap REITs (22.2x/13.5x - 1 = 64.4%).

This tremendous pricing disparity has created attractive M&A opportunities for private equity and large REITs to acquire significantly discounted smaller REITs. M&A activity has begun picking up and is likely to continue throughout the remainder of the year as these smaller REITs can be acquired at a price well above where they are currently trading, but below fair value. This can represent a big win for both parties as the wide disparity in pricing creates terrific arbitrage opportunities. A few examples of recent M&A are outlined below:

Chesapeake Lodging Trust (CHSP) was acquired by Park Hotels & Resorts (PK) on September 18th. CHSP shareholders received $11/share in cash as well as 0.628 shares of PK. After the closing of the acquisition, Park is now the second largest Hotel REIT behind Host (HST).

The average small cap REIT trades at a multiple of 13.5x FFO, whereas 92% of large cap REITs trade at multiples higher than 13.5x. This REIT sector-wide pricing disparity illustrates the tremendous scope of M&A potential over upcoming months. Although M&A can be highly accretive for both parties, the REIT that is acquired typically experiences a significantly better share price reaction to the M&A announcement. REITs large and small can capitalize on this mispricing, but the opportunities are potentially greatest for the investors that can correctly identify likely takeout candidates. By carefully analyzing REIT data and industry trends, active investors have the opportunity to outperform ETFs.

Disclosure: I am/we are long CBL, WPG, PEI & MAC. I wrote this article myself, and it expresses my own opinions. I am not receiving compensation for it (other than from Seeking Alpha). I have no business relationship with any company whose stock is mentioned in this article.

Additional disclosure: 2nd Market Capital and its affiliated accounts are long CBL, WPG, PEI & MAC. I am personally long PEI and MAC. This article is provided for informational purposes only. It is not a recommendation to buy or sell any security and is strictly the opinion of the writer. Information contained in this article is impersonal and not tailored to the investment needs of any particular person. It does not constitute a recommendation that any particular security or strategy is suitable for a specific person. Investing in publicly held securities is speculative and involves risk, including the possible loss of principal. The reader must determine whether any investment is suitable and accepts responsibility for their investment decisions. Simon Bowler is an investment advisor representative of 2MCAC, a Wisconsin registered investment advisor. Positive comments made by others should not be construed as an endorsement of the writer's abilities as an investment advisor representative. Commentary may contain forward looking statements which are by definition uncertain. Actual results may differ materially from our forecasts or estimations, and 2MCAC and its affiliates cannot be held liable for the use of and reliance upon the opinions, estimates, forecasts and findings in this article. Although the statements of fact and data in this report have been obtained from sources believed to be reliable, 2MCAC does not guarantee their accuracy and assumes no liability or responsibility for any omissions/errors.