China: The Patient Is Not Responding - What This Means For Global Growth

Changes in various monetary aggregates are often the earliest leading indicator that monetary policy (tightening or easing) is flowing through the economy. This is a concept that we detailed in a note earlier this week.

As economies become more indebted, central bank policy loses its efficacy in a concept often referred to as "pushing on a string." Central banks are trying to ease conditions, but some monetary aggregates are unresponsive. Luckily, this is not the case in the United States (yet) as money supply growth started to inflect after the Federal Reserve shifted from rate hikes and "QT" to rate cuts and "New QE." China, however, may have a problem of its own.

Since the start of 2019, "China Stimulus" was an overused talking point.

Ironically, despite the headlines, the stimulus is not apparent in the rate of Chinese money growth. Moreover, the rate of money growth in China is sitting at one of the lowest levels since reported data is available.

As the chart below shows, each time China embarks on a massive round of monetary stimulus, money supply growth responds; namely 2008 and 2015. 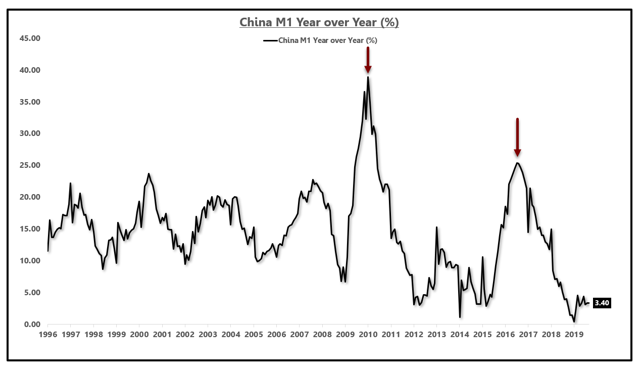 Even more troubling is that historical correlations that suggest China's money supply growth should be soaring have broken. 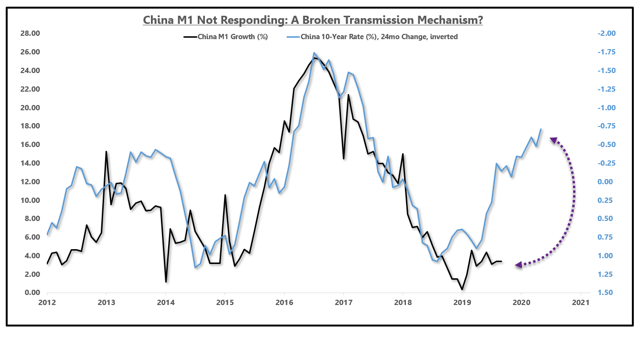 While the break in the historical correlation may be surprising, the fact that China may be at their "pushing on a string" moment is less of a shock.

Economist Lacy Hunt measures the diminishing marginal returns of debt by monitoring the 10-year change in the amount of GDP generated for each dollar of debt.

It should be noted that the US currently has the best ratio of GDP to Debt in the developed world, indicating that the global economy is likely to act as a drag on the United States.

China, on the other hand, has seen the effectiveness of debt collapse by nearly 40% in the last ten years. This development is rather unsurprising, given the unprecedented addition of unproductive debt plaguing the Chinese economy. 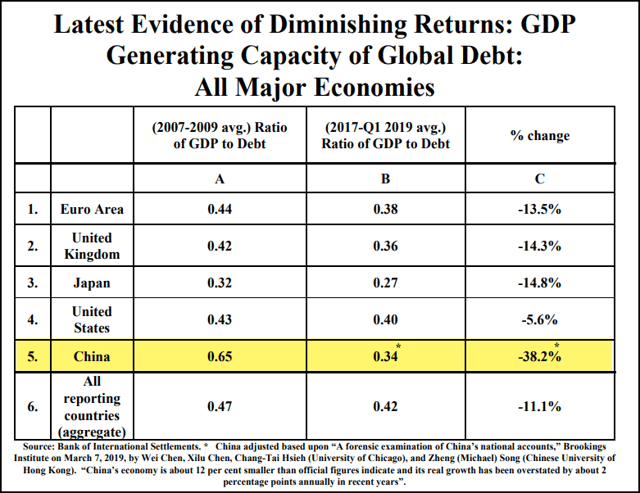 Graphed below is the GDP weighted rate of global money supply growth. China's contribution to global growth is large, and a lack of monetary acceleration has resulted in a lackluster pickup in global money growth. 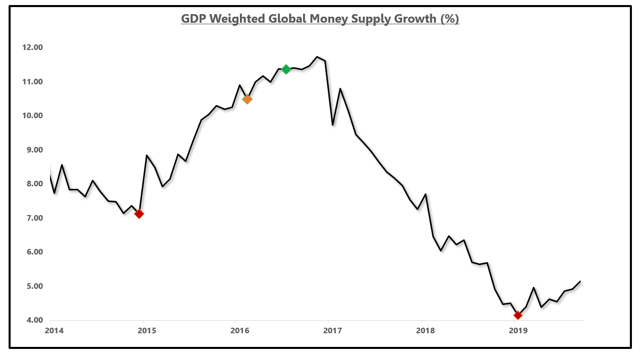 In 2015, global money supply (GDP weighted) was increasing at 7.13% year over year. This is noted by the first red diamond. By February of 2016, when the US stock market bottomed after a recessionary growth scare, global money supply growth had increased 47% to 10.49% year over year (orange diamond). The official pickup in coincident economic data and bottom in US bond yields did not occur until the middle of 2016 which came with a 59% increase in global money growth compared to the bottom in 2015 (green diamond).

Today, global money supply growth is increasing at 5.14% year over year, only a 24% increase relative to the low point in early 2019.

As the GDP-to-Debt table above shows, the efficacy of global debt has declined by about 11% over the past ten years.

While central banks scramble to ease monetary policy enough to avoid a recession, their job has become increasingly difficult with less effective tools.

Even if a recession is avoided, which remains an open question pending the slowdown in US employment growth, the next upturn in global growth is set to be significantly weaker compared to 2016-2018 based on the acceleration (or lack thereof) in global money supply growth.

Start Using The Economic Cycle Sequence To Your Advantage

If you understand the sequence of economic cycles, you can profit from the opportunities that emerge from its predictable ebb and flow.

With a membership to EPB Macro Research, you will understand where to put your money and when to move it in virtually all stages of the economic cycle.

Take advantage of the 14-day free trial before the price increase!

You have nothing to lose by joining for free but if you learn how to navigate the economic cycle, it will change the way you invest forever.