Marchex (NASDAQ:MCHX) operates as a call analytics company that helps businesses connect, drive, measure, and convert callers into customers. It is experiencing headwinds as it transforms itself into an analytics company on the back of a declining legacy business.

A few years ago, its CEO left and it had to lay off 10% of staff, but it is slowly climbing out of the ditch:

One has to keep in mind that the revenue growth originates from the two acquisitions at the end of last year with Callcap producing roughly $9M in revenues last year and Telmetrics in the same order, but at least these haven't led to a deterioration in GAAP operational performance.

The company is now in the process of transforming itself into a big data AI company (Q2CC):

We've gone from delivering consumer the business transcripts in several hours after a call to delivering the full transcript in seconds, while producing predictive consumer intent signals virtually instantaneously.

The company started reorienting its business away from its legacy Marchex Search Analytics, which allows marketers to drive phone calls from search campaigns and attributes inbound phone calls made directly from paid search ads and landing pages to a keyword.

Instead of generating calls, its business is shifting to analytics in analyzing the calls for relevant data, for instance with Marchex Omnichannel Analytics Cloud, which helps marketers connect customer conversions driven from paid media channels, including search, display and video, social and sites, to phone calls made to a business. Its product offerings include:

The NEXTms platform is the former Callcap, which the company acquired last year. The analytics products constitute roughly half the revenue and enjoy higher gross margins.

The company isn't without significant partners, like Facebook (FB), supplying its clients its Marchex Omnichannel Analytics Cloud Platform, which is integrated on Facebook for the benefit of its customers.

The reorientation towards analytics has gotten a new boost the past 12 months with the development of new products based partly on acquisitions:

The Sales Edge (in its three versions) was released only in early August this year and is built on the Conversational AI platform. From the PR:

Sales Edge, an artificial intelligence-based product suite that enables businesses to understand customer conversations in real time and at scale to optimize the sales process and win more business. These solutions arm businesses with data-driven intelligence and deep knowledge of consumer intent, which is key to delivering a personalized experience and engaging with customers at critical moments of their buying journey. Built upon Marchex’s recently released Conversational AI technology,

It is built on the Conversational AI platform, which (Q2CC):

A new suite of AI models featuring 230 signals that can understand and predict customer intent. This technology is the catalyst to helping businesses deliver personalized experiences during sales conversations and it improves outcomes both over the phone and via text.

How effective is this? We don't really know, but in principle, this could give useful information. Apart from its effectiveness, like so many AI applications, it is built on an increasing return business model.

The company is leveraging its treasure trove of 1B minutes of conversational data, which is the "raw material" from which machine learning derives useful algorithms.

If these are indeed useful, more customers will put them into practice, producing more "raw material," which sharpens the algorithms, a potentially virtuous cycle.

Sales Edge Rescue is a transformational product that alerts businesses when potential buyers finish the conversation without making a purchase. In Sales Rescue, our AI interprets a host of signals, such as when a customer didn't make an appointment or when the inventory didn't match the customer's initial question and delivers this intelligence to businesses, so they can take real-time action to rescue the sale before it migrates to a competitor.

In fact, of the above three suites, it was the first to be released (in April), and it's already field tested with customer trials which can "potentially be additive to our growth profile as we move into next year," according to management on the Q2CC. There is a list of features of Edge Rescue in the PR. It can even be tailored for specific verticals (and indeed, why not?)

The three variants of Sales Edge do not yet generate revenue, but there are promising signs, according to management.

SA contributor Donovan Jones wrote about the Telmetrics and Callcap acquisitions; both are bolstering the analytical capabilities of Marchex.

We can calculate the revenue these companies generated from the 10-Q, providing the pro-forma results of operations of the company as if the acquisitions of Telmetrics and Callcap had taken place on January 1, 2018 (10-Q): 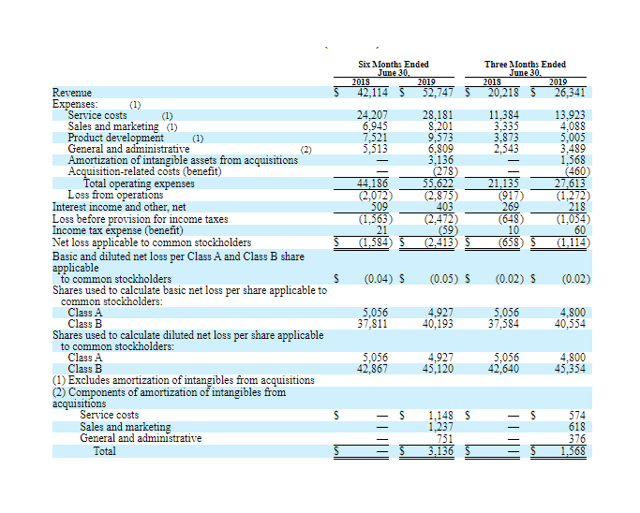 The Q2 revenue of $26.3M is actually quite promising, as this is $6.1M more than Q2 last year, which is a pretty strong indication that its analytics business is growing nicely already, given that:

Indeed, when management was asked about this during the CC, it answered (Q2CC, our emphasis):

Because of the integrations of the acquisitions, it's not easy to break out the customer base before and after, but in the best effort that we can, in the second quarter it is still growing at a double-digit organic growth rate for that core analytics.

Management also said that analytics was not yet break-even, but that it had good hopes this would be achieved through growth and leverage in the "intermediate and potentially even earlier term" (Q2CC).

The revenue guidance seems a little soft to us, given that last year's Q3 revenue was $22M and didn't include the acquisitions.

With the shift towards analytics, gross margins are trending upwards while GAAP operational margins have declined a bit, but that's acquisition related.

After difficult years, cash flows have moved into the black, and given that the company has ample cash ($45.2M) and no debt on its balance sheet, it has plenty of time to rig its product and engineer a revival in its fortunes.

SA Contributor Zac Thompson argues that Marchex model is unsustainable, but we struggle to see on what that is based. In fact, we are inclined to argue the exact opposite, given that the company produces positive free cash flow and has no debt.

That is, the company has both plenty of time and as well as resources to grow its analytics business, and there are some signs this is already happening with validation coming from the likes of Facebook and a large automotive company gained as a customer in Q1.

What's more, there were indications in Q2 that not all of its revenue growth is from acquisitions and therefore its first-generation analytics products are already growing nicely.

However, Q3 guidance is quite low, and unless this will be the result of a significant decline in its legacy business, it could alter that positive picture of growing analytics business.

The company's balance sheet and cash flow would enable it to make a couple of acquisitions of the size of the last ones, provided there are good opportunities.

It's too early to tell how its second generation of analytics products will fare in the market, but investors have time to find out as the shares are really quite reasonably priced without revenue from these. If these product gain traction, the upside could be significant and most of the development costs have already been incurred.