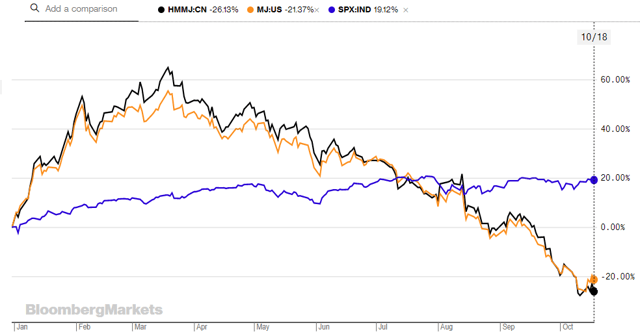 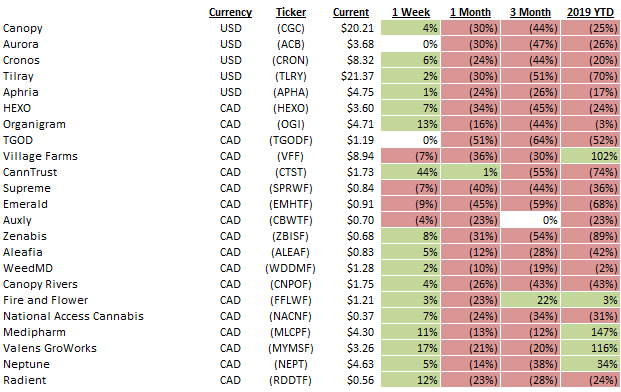 U.S. Cannabis Stocks: MSOs finally caught a break with iAnthus (OTCQX:ITHUF) up 29% and Harvest Health (OTCQX:HRVSF) up 14% without major news. MedMen (OTCQB:MMNFF) continued to fall as investors cope with the reality after the PharmaCann deal was terminated.

U.S. Small-Cap and Ancillary: Despite strength elsewhere, vaping-related stocks dropped further as Greenlane (GNLN) and KushCo (OTCQB:KSHB) both continued to fall. TILT (OTCQX:TLLTF) rose 30% after receiving a conditional license for adult sales at its existing location in Massachusetts. 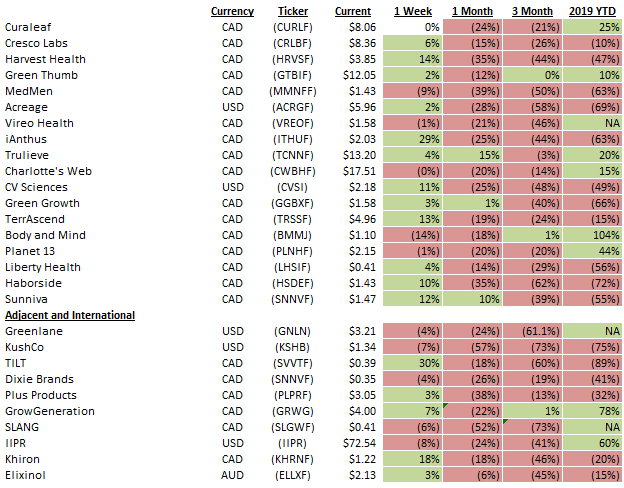 Aphria was the first major cannabis firm to report when it announced results for the three months that ended on August 31, 2019. We think the quarter was at best stable and there was little to cheer about. Cannabis revenue, as shown below, barely grew despite Aphria One reaching full capacity already. EBITDA came in at $1 million positive which is not easy to find among Canadian LPs. More importantly, the management reiterated its fiscal 2020 full-year guidance of $650-$700 million of revenue and $88-$95 million of EBITDA. Based on last week's Q1 results, we think Aphria would have to produce some miraculous growth in the next three quarters to meet this guidance. More likely we will be greeted with a guidance cut next quarter based on the fundamentals of the Canadian legal market. 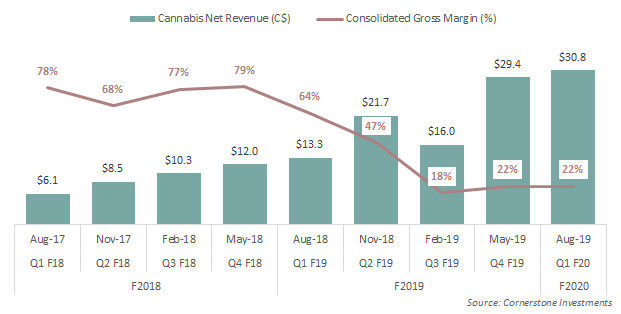 While the cannabis sector enjoyed a brief rally when Aphria released its results last week, we think investors need to remain vigilant. Aphria is one of the leading players in Canada in terms of operational readiness and capacity ramp. Even then, the company is struggling to produce meaningful profits as EBITDA remains hovering around break-even. There is also no evidence that Aphria will be able to significantly increase its product sales when the overall market could be flooded with cannabis and consumers remain reliant on the black market.

Last week, HEXO released a new product line selling at C$4.49 per gram, one of the lowest-priced products on the market. As we have analyzed earlier, the Canadian market is expected to enter oversupply as soon as 2020 and price compression will become inevitable once that happens. Just as Canadian LPs are ramping up their capacity, the market has not been growing fast enough to support a new wave of production coming online.

Aphria's results failed to inspire confidence among cannabis investors and the stock gave up most of its gains later in the week. With other LPs expected to report Q3 results in the following weeks, we think investors are probably going to see flat to little growth from most of the companies. LPs frequently cited a lack of retail outlets as the primary reason for the disappointing industry sales, and that situation has not improved in key markets like Ontario and Quebec. Canada just officially legalized new product forms including vapes, edibles, and topicals but sales likely won't begin until December. We are cautious towards the upcoming earnings season and we continue to believe that Canadian LPs will face increasingly difficult industry fundamentals, with oversupply and price compression being the two biggest threats.

Cornerstone Investments
23.16K Followers
We are your best guide to cannabis investing. Read our 2021 Cannabis Sector Outlook here. We also provide in-depth industry analysis and coverage of 70+ cannabis stocks to help you get started.
Follow