It's reassuring when there are things shareholders can trust about a company. And, there are certainly some trustworthy things about Watsco (NYSE:WSO), the top HVAC/R (heating, ventilation, air conditioning and refrigeration) distributor in North America. 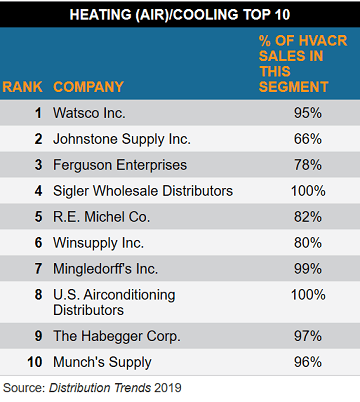 First, Watsco is going to grow through acquisition.

"We remain very active in the industry seeking great companies. We believe in investing in great companies and providing their leaders with resources to grow their business."

Second, because giving guidance has actually been a sore spot with Watsco in the past, if the company gives an estimate, projection or guidance, it's reliable.

"When we did [gave guidance], nobody paid attention."

Third, the market tends to predictably react to HVAC/R industry news. Watsco's share price is often included, temporarily, in the reaction. Patient investors could capitalize on the timing.

Despite occupying the top spot in its industry, Watsco is intent on growing - both organically and through acquisition. But, its acquisition growth strategy differs from many companies. In most acquisition scenarios, the acquiring company focuses on finding synergies and cost-cutting. But, Watsco's strategy is to leave the acquired company intact and support it rather than convert it to a cookie-cutter operating model.

"We don't look for synergies. That is up to them. These businesses that have done so well, but we think we can grow them faster by what we said in the press release, we can capitalize them better, we can ask them to take more risk if they wish to. But basically, our culture and acquisitions support the entrepreneurship that was there before we got there... So they are independent in terms of what they do, but they are part of Watsco utilizing the resources of Watsco that is a heck of a good accommodation, which has helped us become the largest in the world in what we do. And so synergy is not a word we use, growth is the word we use."

When a distributor is acquired, Watsco offers the distributor an arsenal of resources - capital, product and technology. It considers technology the difference-maker.

"We continue to drive adoption of a variety of customer-focused technologies to better serve our contractor customers. That adoption has led to higher growth rates and lower attrition rates with customers who regularly use our technology. Over the long run, we are confident Watsco's innovations will transform the way business is done in our industry, and will also influence and convince great companies to become a part of the Watsco family." (emphasis added).

Watsco's plan to attract interest to its arsenal is bolstered by the existence of approximately 1,300 independent distributors in the United States. Already in 2019, Watsco has added two distributors - DASCO Supply in April and Peirce-Phelps in August.

DASCO Supply is a distributor of air conditioning and heating products based in New Jersey. In 2018, DASCO's revenues were approximately $56 million.

Peirce-Phelps is a Pennsylvania distributor founded in 1926 and operated by the third generation of the founding family. Out of the approximate 1,300 independent distributors, it ranked in the top twenty. Its revenue in 2018 totaled $206 million.

Watsco is so intent on making more acquisitions, it even advertised in the press release about the Peirce-Phelps acquisition.

"Watsco is actively seeking additional opportunities to invest and grow through acquisitions given its relative low market share of the estimated $40 billion North American distribution marketplace for HVAC/R products."

And, again, it considers technology as the difference-maker.

"When you meet the [technology] team, you understand how big of a deal this is and how impactful it has been and how much it ensures our viability going forward. And those are the conversations that we're having with some of these targets like the Peirce brothers who understand that technology is a real thing that it's something that they need for their business that they are going to have to be very challenged to do on their own, but a nice landing place to do it with Watsco and not only because of the technology, but because of the culture.

"We keep the name, the team. We honor the culture and empower the leadership. We ask the leadership for an aggressive growth plan and we help them achieve it. We motivate the team with long-term equity and build an ownership culture. And we collaborate with big ideas, technology, capital, M&A opportunities and provide support in any way needed." (emphasis added)

When Watsco CEO, Albert Nahmad, mentions anything akin to guidance or estimates, investors should take note. Furthermore, when the subject comes up in the first half of the year, it could be prudent to take action.

"This is such a seasonal business, we like to look through the first half and then talk about what we think is going to happen."(emphasis added)

Consider the progression in 2018. In the first quarter earnings call, Watsco was already optimistic.

"I'm pleased to report that Watsco delivered another record quarter. It's a good start to what we believe will be another record year. Sales, operating income, net income and earnings per share reached record levels." (emphasis added)

The narrative continued in the second quarter earnings call.

But, specifics were not an option.

"Well, we're not going to quantify anything, but we do want to tell you we are expecting record performance obviously." (emphasis added)

By the third quarter earnings call, Watsco committed to a range.

"Watsco achieved record third quarter results. This includes record sales, profits, net income and earnings per share. In terms of our outlook for this year, we estimate annual EPS in 2018 to be in the range of $6.40 to $6.50 per share versus 2017's adjusted EPS of $5.54." (emphasis added)

All was validated in the year-end earnings call. Diluted earnings totaled $6.49 per share.

The first half of 2019 started on a similar trek with optimism in both the first quarter and second quarter earnings calls.

"Watsco produced another record quarter. July growth trends have improved and we believe growth rates in the second half of the year will improve and produce another record year for our company." (emphasis added)

"We are optimistic that 2019 will be a record year for our company." (emphasis added)

The market reacted favorably to the company's third quarter report and anticipated full-year results. The share price peaked at its 52-week high of $176.64 on the 17th. Based on the company's likely earnings for 2019, this would mean the forward P/E ratio falls around 27. Though this may seem rich, it is comparable to Watsco's five-year average P/E ratio of 26.95.

The market does tend to value Watsco more aggressively than industry growth projections.

"Employment of heating, air conditioning, and refrigeration mechanics and installers is projected to grow 13 percent from 2018 to 2028, much faster than the average for all occupations. Commercial and residential building construction is expected to drive employment growth, and job opportunities for HVACR technicians are expected to be good."

Again, technology is expected to play a key role in driving industry growth.

"HVAC and plumbing contractors are adapting to major technical change from both manufacturers and end users. Utility companies are integrating technology to monitor and control systems. Within commercial or industrial buildings, the HVAC and plumbing systems are also part of the buildings' monitoring system, which is also using technology to diagnose and repair problems in the system. Manufacturers are seeking competitive advantage and therefore are designing products with increased technological depth and functionality."

Watsco's share price also tends to react to industry news. In late July, when HARDI (Heating, Air-conditioning & Refrigeration Distributors International) reported softening annualized sales growth for the first half of 2019, Watsco's share price dropped 6% in the next week from $162.62 to as low as $153.12.

"The average annualized sales growth for the 12 months through June 2019 is 9 percent. This was the second consecutive month when the average monthly sales performance was a decline. We have not had back-to-back declines since battling the remnants of the last recession in early 2010."

Similarly, when the results were released in early October for August, Watsco's share price dropped 3.6% in the next few days.

"It is nice to see mid-teens growth after two soft months."

Investors searching for a healthy company with reliable growth potential in a developing industry may want to consider Watsco. The HVAC/R industry's development is keying on technology. At the same time, Watsco's growth potential relies on its ability to differentiate with technology fueling its acquisition strategy. This combination of factors bodes well for the company's future prospects.

As well, Watsco's track record proves investors can trust the company's projections, guidance and estimates. When the company predicts a record year, shareholders can expect a record year.

But, Watsco could hardly be considered a bargain. Although, its share price does tend to pullback, temporarily, at times. There's a lot of evidence supporting how difficult it is to time the market. Fortunately, for potential Watsco investors, publishing of industry reports is predictable - near the end of every month.

By relying on the company's growth strategy and tracking when it shares positive projections, a patient investor looking to start or add to a position could take advantage of these temporary market reactions.

Jenks Jumps
2.91K Followers
I am a self-taught investor. As a member of an investment club, I provide the majority of research to the club. When I started writing for SA, the club was interested in stocks offering growth at a reasonable price (GARP) and stocks that were undervalued. We have since adopted a dividend growth investing (DGI) strategy. We search for GRAVY - our acronym for "GR"owth "A"bility, "V"alue and "Y"ield. I am very interested in other active investors critiquing my research. I believe this critique will make me a better investor for my own interests as well as the club's.
Follow

Disclosure: I am/we are long WSO. I wrote this article myself, and it expresses my own opinions. I am not receiving compensation for it (other than from Seeking Alpha). I have no business relationship with any company whose stock is mentioned in this article.

Additional disclosure: I belong to an investment club that owns shares in WSO and may reinvest in it after negative industry news.