The problems in the banking system targeted by the Fed's money printing are likely getting worse by the day.

The problems leading up to the 2008 crisis were never fixed - just papered over.

Counterparty defaults were one of the key detonators of the 2008 financial melt-down.

"Like gold, U.S. dollars have value only to the extent that they are strictly limited in supply. But the U.S. government has a technology, called a printing press (or, today, its electronic equivalent), that allows it to produce as many U.S. dollars as it wishes at essentially no cost." Helicopter Ben Bernanke's address to the National Economic Club, 2002

It took the Fed more than 4 1/2 years to remove from the banking system just $750 billion of the $4.5 trillion in money it printed. The Fed stopped the removal process ("Quantitative Tightening") at the beginning of September. But just 13 days later the Fed began adding liquidity back into the banking system via its repo operations. 42 days later, the Fed's balance sheet has spiked up by $253 billion and is back over $4 trillion: 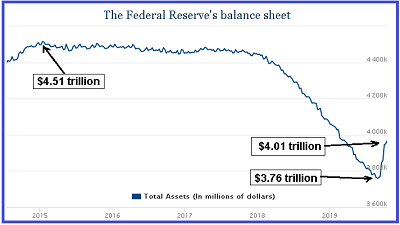 Apparently, the repo/term repo operations were not enough. On October 11th, the Fed announced that it was going to purchase at least $60 billion T-bills per month through at least the 2nd quarter of 2020. The rationale was "in light of recent and expected increases in the Federal Reserve's non-reserve liabilities" (link). "Non-reserve liabilities" refers specifically to "currency in circulation." The only way to increase currency in circulation is to create it. Thus, the above rationale is a decorative phrase for "money printing."

The problems in the banking system targeted by the Fed's money printing are likely getting worse by the day. The Fed has now conducted three outright money printing operations since October 11th. Each operation has been progressively more over-subscribed. Wednesday's operation of $7.5 billion had nearly $6 of demand for every $1 printed and offered.

As I have asserted since the Fed's repo operations commenced, the problem is significantly more profound than the "quarter-end liquidity" needs of corporations and banks. I suggested that the liquidity injection program would quickly increase in size and duration, ultimately morphing into permanent QE/balance sheet growth/money printing.

While some of the money being printed will be used to absorb the massive amount of new Treasury issuance, the nexus of the problem is seeded in the big bank balance sheets and business operations. The problems leading up to the 2008 crisis were never fixed - just papered over. Furthermore, the legislation that was promoted to prevent a repeat of 2008 and protect the taxpayers was nothing more than window dressing which enabled the banks to hide their massive fee-generating recklessness (Dodd-Frank, Consumer Financial Protection Bureau).

The "Too Big To Fail" bank balance sheets collectively are close to double their size in 2008. A frighteningly large portion of these assets are sub-prime or near-sub-prime loans plus OTC derivatives that have been well-hidden off-balance-sheet. One of the regulatory initiatives put into effect in 2010 enabled banks to hide their total derivatives holdings behind a nebulous concept called "net derivatives exposure." The "net" metric supposedly measures a bank's unhedged net economic risk exposure, netting out off-setting hedges with counterparties.

But counterparty defaults were one of the key detonators of the 2008 financial melt-down. Unfortunately, Congress and the Fed have enabled the banks, after monetizing their catastrophic business decisions in 2008, to create a financial Frankenstein that is now financially apocalyptic in scale. The rapid escalation of the repo operations is evidence that the fuses on the various financial bombs have been lit.

Follow Dave Kranzler and get email alerts
+
Add a comment
Disagree with this article? Submit your own.
To report a factual error in this article, click here.
Your feedback matters to us!