Dial back to September 2018, Inogen (NASDAQ:INGN) was a high-flying stock with a meteoric rise as the stock doubled less than a year to a high of 283. Fast-forward to today, that price is in the low $50s, less than a fifth of the high. What happened to this company? Did the wheels fall off or something? Or is this high-flying growth stock now a decent valuation?

Inogen is a medical technology company specializing in the development of Portable Oxygen Concentrators (POC). POCs are used to deliver supplemental long-term oxygen therapy to patients suffering from chronic respiratory conditions. Chronic respiratory diseases (CRDS) are diseases of the airways and other structures of the lung. Some of the most common are chronic obstructive pulmonary disease (COPD), asthma, occupational lung diseases, and pulmonary hypertension. These diseases hinder a person's natural ability to get enough oxygen for the body to maintain its various physiological functions. Risk factors for developing such diseases include tobacco smoke, general air pollution, occupational chemicals, dusts, and other genetic factors. These risk factors are fairly common in today's world, especially in developing countries.

The market is divided between oxygen source and oxygen delivery devices. With regard to an oxygen source, there are three main types 1) Liquid Storage and 2) Compressed Gas Storage (both of which use tanks and cylinders) and 3) Concentrators. In the past, these patients have relied on a combination of stationary oxygen concentrator systems (for home use) and smaller oxygen tanks or cylinders for mobile use. Managing the smaller oxygen tanks can be cumbersome as it has a finite amount of oxygen which would limit the number of activities and time spent outside (i.e. you don't want to run out of oxygen in the middle of a grocery store). Additionally, to have mobility within their own homes, patients must attach long, cumbersome tubing to (or find a way to wheel around / drag) their stationary concentrators. Despite what Inogen implies and/or excludes in their presentation and 2018 10-K, it is wholly possible to re-fill your small mobile oxygen tank with oxygen generated from your stationary oxygen concentrator. Still, the value proposition of a portable oxygen concentrator remains. 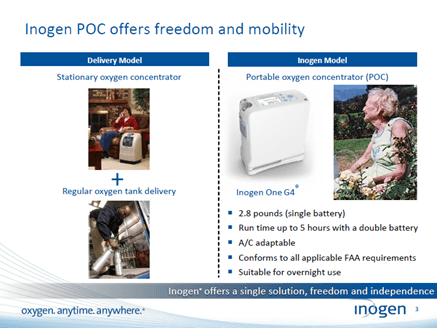 In terms of Total Addressable Market, according to a report by Zion Market Research, the global oxygen therapy market was valued at approximately USD 9.3 billion in 2018 and is expected to grow to 20 billion by 2025, a CAGR of around 11.4% between 2019 and 2025. The US, Canada, and Europe are most likely to emerge as the largest oxygen therapy markets globally over the forecast time period due to the presence of advanced healthcare facilities and infrastructure. With other regions such as Asia Pacific and Latin America to grow rapidly in the future due to improving economic conditions as well as high pollution levels (which would lead to more chronic respiratory diseases). At 9 billion, this is currently a decent TAM with massive growth potential. Based on reading over the market research, my opinion is that availability and ease of use will be a primary driver for adoption while cost would probably be the main factor for developing countries. Even taking into account the US alone, Inogen still has massive run-way potential in terms of sales just because of the current low penetration. 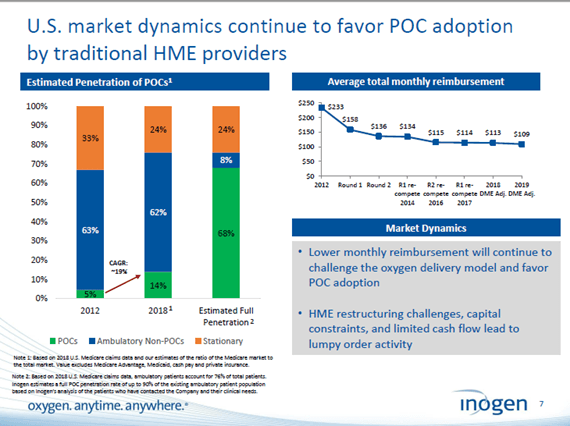 In terms of competition, Inogen isn't alone in the POC market as other medical device makers such as Phillips (AMS: PHIA), Resmed (RMD), and others have their own POC. Looking quickly at reviews for the products, most are at roughly the same price point with Inogen and Phillips edging the competition in terms of quality. Although neither company has really differentiated themselves product wise, the current TAM is still so large that there should be little threat of a pricing war (as evidenced by the products being close in price). Inogen is also expanding its product offering via its New Aera acquisition. 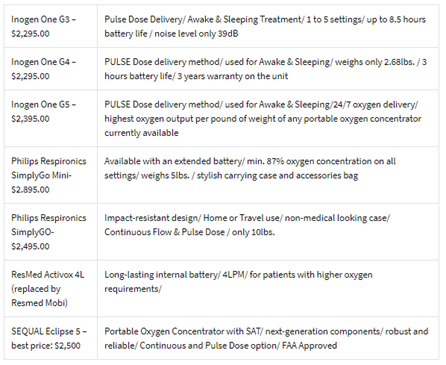 In terms of sales, the stock has been battered as of Q2 2019, although positive, missed guidance. As discussed in the earnings call, much of the blame for the weaker guidance can be attributed to the poor performance of the sales staff as the company tried to scale up its business. Given that the company is still in growth mode (checking the 10-Q, revenue actually increased by 9% for 2019 so far), I largely view this as temporary headwinds. Furthermore, when examining headwinds a company is facing, I like to ask myself "How easy is it to solve this problem?" Not to downplay management but reorganizing sales is an easier fix compared to say having to shift strategies or rebuild a brand. Therefore, I think the market has unfairly punished Inogen more than what is warranted by the issue at hand. Perhaps it is a consequence of coming from a sky-high valuation that now we are at the other extreme. Business to business sales can take long and be rather lumpy (i.e. not come in a consistent way); however, as long as the company offers a clear value proposition to its customers, I am willing to wait for sales to come.

For a growth company when it comes to its financials, the company is pretty solid as Inogen is debt-free and cash flow positive with a $60 million CFO in 2018. The company had a positive net income of $52 million in 2018 and $15 million in the 6 months of 2019. Note that this is actual GAAP income and not "company-adjusted to look good" income. Even the New Aera acquisition was done in a very prudent manner as no additional capital requirements (whether debt or equity) was raised. The company is trading at a P/E ratio of 49 which, while not exactly cheap, is decent for a high growth company. Given the fact that the stock has been beaten down despite its continued growth in sales and the massive potential market makes this a buy for me. 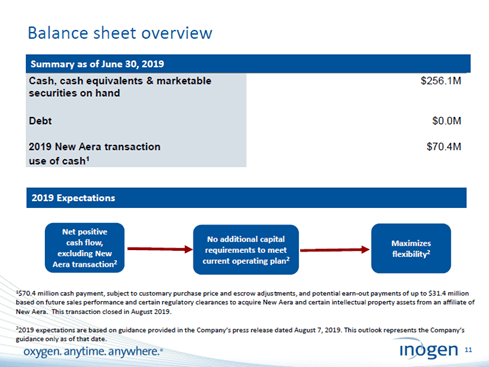 Value Kicker
3.15K Followers
Nine to 5 by day. Hobbyist stock trader by night. I got an MBA and a CFA ... so that should count for something. I only care about my own greedy interests and I love feeding trolls. Not your financial advisor. Information for entertainment purposes only. Diamond hands are forever.

Disclosure: I/we have no positions in any stocks mentioned, but may initiate a long position in INGN over the next 72 hours. I wrote this article myself, and it expresses my own opinions. I am not receiving compensation for it (other than from Seeking Alpha). I have no business relationship with any company whose stock is mentioned in this article.

Additional disclosure: Caveat emptor! (Buyer beware.) Please do your own proper due diligence on any stock directly or indirectly mentioned in this article. You probably should seek advice from a broker or financial adviser before making any investment decisions. I don't know you or your specific circumstances, therefore, your tolerance and suitability to take risk may differ. This article should be considered general information, and not relied on as a formal investment recommendation.