In the absence of the gold standard, there is no way to protect savings from confiscation through inflation. There is no safe store of value.

Gold is back in fashion this year. Economic and geopolitical uncertainty, coupled with low interest rates, continues to fuel demand.

A recent Lead-Lag Report mentioned that gold ETFs have seen their most significant quarterly inflows since 2016. In August, gold price reached its highest level in six years. 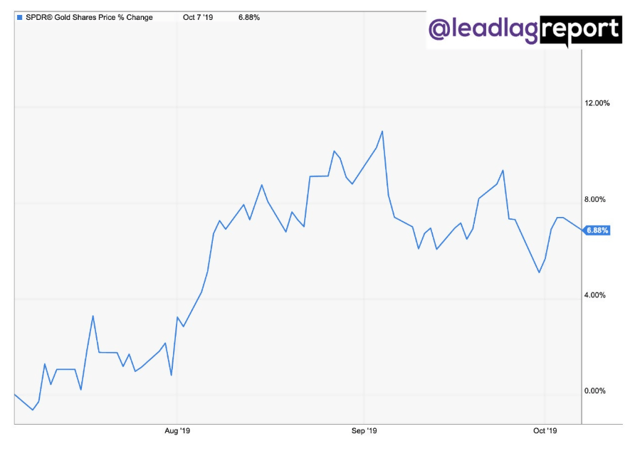 To be precise, the amount of gold held by gold-backed ETFs surged to record highs in September. The World Gold Council (WGC) estimates that about 2.8k metric tons of gold were held in gold ETFs in September, the strongest increase month to month since 2016.

And it’s not only an American story. Funds listed in Europe and elsewhere joined the party as well. 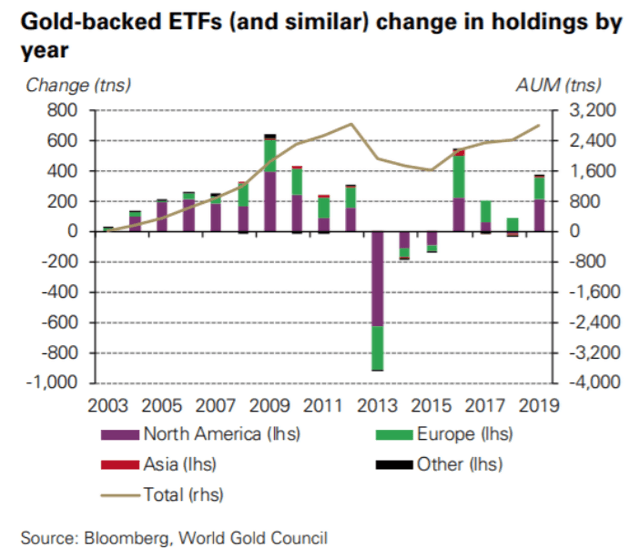 To continue on the same lines, the official Chinese demand for gold didn't stop in the last month. China's gold reserves continued to grow, adding another 95.8 tons to its reserves in 2019. 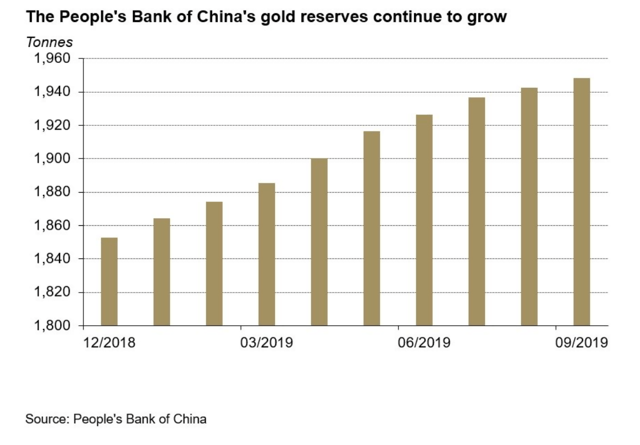 It appears that there's a strong demand for both paper and physical gold. Here are three technical reasons why gold prices should keep advancing in the near future.

First, let’s have a look at the bigger picture. This is a twenty-year weekly chart beautifully showing the parabolic advance before and after the 2008 financial crisis. What followed is a correction, badly needed from a technical point of view.

But the 2013-2019 consolidation looks like a classic rounding bottom pattern, a bullish reversal pattern known for the fact that it is time-consuming. Well, six years did the job.

Second, if the rounding bottom is not enough, classic support and resistance analysis shows resistance broken by the recent move higher. $1350 did a great job of capping any potential advance for the past years until 2019’s break higher.

Third, another argument for a bullish break higher is the fact that the consolidation also looks like an inverted head and shoulders pattern - a massive one!

This is a point I also made some time ago. The break above $1350 triggers the run for the measured move to $1700. Once there, the proximity to the 2011 highs naturally attracts more interest. Probably we’ll see some profit-taking by the time $1700 comes, but that’s likely to be just a consolidation.

For price action ideas, it is always best to go on the lower time frames. Below, there's the price action that led to the break of the six-year long consolidation.

To start with, gold advanced and formed a bullish flag for the first two quarters of 2019. The projected measured move, judging by the flag’s poll, came at about $1425, well above the all-important $1350 level. Next, gold formed a triangle as a continuation pattern before stalling at $1550.

One can't ignore the potentially bullish flag (yes, another one) forming for the past two months. A break higher opens the gates to the projected measured move of the inverse head-and-shoulders pattern mentioned earlier.

So, how do you trade it? Wait for gold to make new highs, while the flag’s structure remains intact. That’s the entry point, with a stop at the lowest point in the flag’s consolidation and targeting $1700.

Any competent analysis has a dual point of view - fundamental and technical. When both of them point to the same direction, it explains why gold is back in fashion.

Your Biggest Mistakes Are Often Invisible.

Sometimes, the biggest risks in your portfolio are just sitting there, waiting to surprise you.

That’s why paying attention to the right data and insights is so important. A few quick tips from an investment manager isn’t enough: you need to dive deep into the signals that shake the market and move your portfolio.

This kind of in-depth research is exactly how I’ve managed to become an award-winning author, and I’m sharing all of my data analysis with you right here.

Click here now to get 14 days free of my Lead-Lag Report today.

Additional disclosure: This writing is for informational purposes only. It does not constitute an offer to sell, a solicitation to buy, or a recommendation regarding any securities transaction. It also does not offer to provide advisory or other services by Pension Partners, LLC in any jurisdiction in which such offer, solicitation, purchase or sale would be unlawful under the securities laws of such jurisdiction. The information contained in this writing should not be construed as financial or investment advice on any subject matter. Pension Partners, LLC expressly disclaims all liability in respect to actions taken based on any or all of the information on this writing.